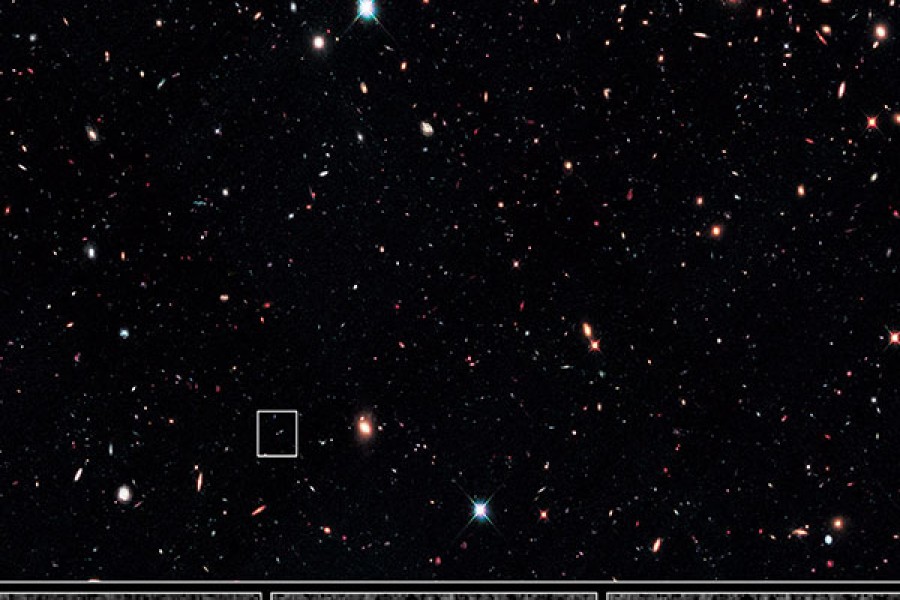 Image caption: This is a Hubble Space Telescope view looking long ago and far away at a supernova that exploded over 10 billion years ago. The supernova's light is just arriving at Earth because it has traveled more than 10 billion light-years across space. The three bottom images demonstrate how the astronomers found the supernova.

A team of astronomers at Johns Hopkins has used data gathered by NASA's Hubble Space Telescope to spot a supernova that exploded more than 10 billion years ago, breaking the previous record by roughly 350 million years.

Nicknamed "SN Wilson" in a nod to Woodrow Wilson, the 28th president of the United States and a Johns Hopkins alumnus, it now stands as the farthest known supernova of the type used to measure cosmic distances. The team that identified SN Wilson is led by Johns Hopkins astrophysicist Adam Riess, who was one of three scientists awarded the 2011 Nobel Prize in physics for using Type Ia supernovae—the same type as SN Wilson—to deduce that the universe's expansion is accelerating, not reversing or even slowing. That acceleration is now widely attributed to a mysterious, undescribed force called "dark energy."

The team's SN Wilson results will appear in the May 10 edition of The Astrophysical Journal.

Type Ia supernovae are bright beacons that are prized by astronomers because they provide a consistent level of brightness that can be used as a cosmic yardstick for measuring the expansion of space. They also yield clues to the nature of dark energy.

"The new distance record holder provides a window into the very early universe," says astronomer David O. Jones, a graduate student in the Johns Hopkins Department of Physics and Astronomy and lead author on the paper detailing the discovery. "We can test theories about how stars explode and how reliable these explosions are for understanding the evolution of the universe and its expansion."

One of the debates surrounding Type Ia supernovae is the fuse that ignites them. This latest detection adds credence to one of the two competing theories of how they explode. Although preliminary, the evidence favors the explosive merger of two burned-out stars, called white dwarfs.

The discovery was part of a three-year Hubble program, begun in 2010, to survey faraway Type Ia supernovae to determine if they have changed over the 13.7 billion years since the big bang, the explosive birth of the universe. Called the CANDELS+CLASH Supernova Project, the census uses the sharp and versatile Hubble Wide Field Camera 3, or WFC3, to assist in the search for supernovae in near-infrared light and verify their distance with spectroscopy. The survey searches for supernovae in two large Hubble programs—the Cosmic Assembly Near-infrared Deep Extragalactic Legacy Survey and the Cluster Lensing and Supernova Survey with Hubble—that study thousands of galaxies.

The supernova team's search technique involved taking multiple near-infrared images spaced roughly 50 days apart over the span of three years, looking for a supernova's faint glow. The team spotted SN Wilson in December 2010 in the CANDELS survey. The scientists then used WFC3's spectrometer and the European Southern Observatory's Very Large Telescope to verify the supernova's distance and to decode its light, finding the unique signature of a Type Ia supernova.

"These supernovae are important tools for studying the dark energy that is speeding up the expansion of space," says Riess, the Thomas J. Barber Professor of Physics and Astronomy at Johns Hopkins and a scientist at the Space Telescope Science Institute. "This study gives us a chance to 'stress test' the supernovae themselves to test how well we understand them."

SN Wilson eclipses the previous distance record holder discovered by a separate team led by Riess' fellow 2011 Nobel Prize winner Saul Perlmutter of the University of California, Berkeley, and the Lawrence Berkeley National Laboratory. (Brian P. Schmidt of the Australian National University in Canberra won the 2011 Nobel Prize in physics along with Riess and Perlmutter.)

Astronomers still have much to learn about the nature of dark energy and how Type Ia supernovae explode.

"The Type Ia supernovae give us the most precise yardstick ever built, but we're not quite sure if it always measures exactly a yard," says Steve Rodney, a member of the Johns Hopkins team and a Hubble postdoctoral research fellow. "The more we understand these supernovae, the more precise our cosmic yardstick will become."

Finding Type Ia supernovae so early in the universe suggests that the explosion mechanism is a merger between two white dwarfs. This model is favored over another supernova pathway in which a white dwarf gradually feeds off its partner, a normal star, and explodes when it accretes too much mass.

"If supernovae were popcorn, the question is how long before they start popping?" Riess says. "You may have different theories about what is going on in the kernel. If you see when the first kernels popped and how often they popped, it tells you something important about the process of popping corn."

In the scenario involving two white dwarfs, the first supernovae pop off about 400 million years after they are born as stars, and then the rate gradually declines over time. "There is a cosmic 'high noon' for star formation at about 10 billion years ago," Rodney says. "If most of the supernovae were exploding very shortly after their birth, then we would see a cosmic 'high noon' for supernova explosions at about the same time. We are actually finding relatively few supernovae like SN Wilson at the time of peak star formation, and this favors the double white dwarf model, with a modest time delay between formation and explosion."

Knowing the type of trigger for Type Ia supernovae will also show how quickly the universe enriched itself with heavier elements, such as iron. These exploding stars produce about half the iron in the universe, the raw material for building planets, and life.