A memorial service was held on April 27 during Johns Hopkins Alumni Weekend to remember Anne Smedinghoff, a 2009 graduate working as a State Department diplomat in Afghanistan who was one of five Americans killed April 6 when their convoy was struck by a suicide bomber. 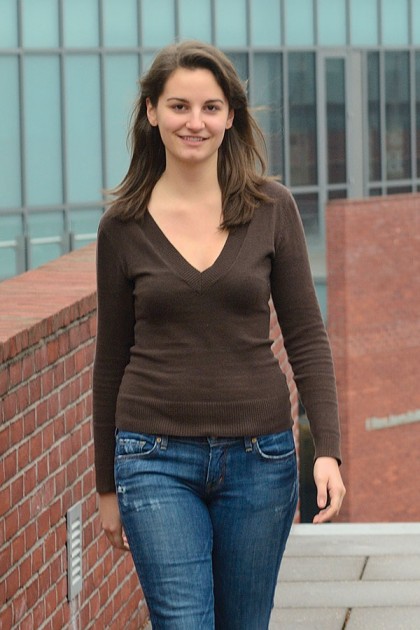 Image caption: Anne Smedinghoff on the Homewood campus in 2008.

Smedinghoff, 25, was among a group of officials traveling to a school to donate books. Four other Americans—a civilian and three soldiers—were also killed in the attack.

Smedinghoff joined the U.S. Foreign Service after graduating from Johns Hopkins and, according to a statement released by her parents, "absolutely loved the work she was doing" in public diplomacy, engaged in direct outreach to the Afghan people. Her parents, Tom and Mary Beth Smedinghoff of the Chicago suburb of River Forest, Ill., added that their daughter "was always looking for opportunities to reach out and help to make a difference in the lives of those living in a country ravaged by war."

In an email message notifying the Johns Hopkins community about Smedinghoff's death, university President Ronald J. Daniels wrote, "Katherine Newman, dean of the Krieger School, joins me in extending our deepest sympathies, and those of the entire Johns Hopkins community, to Anne's parents and family and to her many friends, especially her Johns Hopkins friends. May they all be consoled by their memories of her vibrant, valuable, well-lived life and by our appreciation of the absolutely vital work she was doing when she died."

Smedinghoff majored in international studies and was a co-chair of the 2008 student-run Foreign Affairs Symposium, called A Decade of Discussion. She was an active member of Kappa Alpha Theta and a founding member of the Johns Hopkins chapter of Rho Lambda, the national sorority leadership recognition society. She was also elected to the Order of Omega, a national fraternity and sorority leadership honor society.

Smedinghoff was the first U.S. diplomat killed on the job since Ambassador Christopher Stevens and four others were killed in an attack on a diplomatic compound in Benghazi, Libya, on Sept. 11, 2012. She had recently assisted Secretary of State John Kerry during a visit to Kabul. In remarks made in Turkey the day after Smedinghoff's death, Kerry said she was "vivacious, smart, capable, chosen often by the ambassador there to be the lead person because of her capacity."