Engineers at Johns Hopkins' Applied Physics Laboratory have developed a portable mapping system—carried in a backpack—that can be used to automatically create annotated physical maps of locations where GPS is not available, such as in underground areas and on ships. 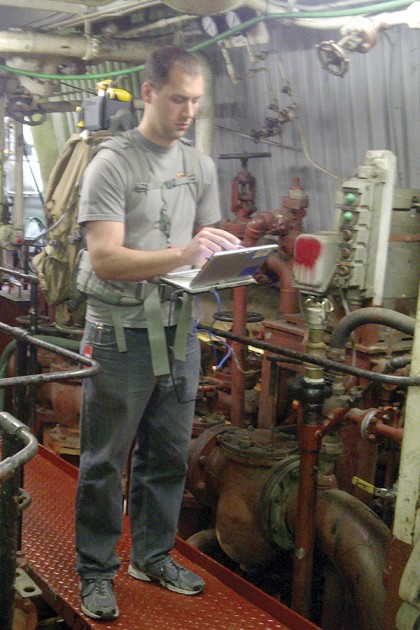 Image caption: An APL engineer uses EMAPS on a ship to generate the map shown above. The system can also be used in underground areas where GPS is not available.

Produced for the Defense Threat Reduction Agency, the Enhanced Mapping and Positioning System captures a floor plan–style map of the area traversed as well as 360-degree photos and sensor readings of that area using a combination of lasers and sensors.

The system improves upon algorithms once developed for robots—which are not practical for all environments—and has a built-in allowance for normal human movement, such as walking.

Using light, detection, and ranging sensors, EMAPS works while operators walk through an area carrying the unit in a backpack. Designed mainly to detect and map environmental threats on ships and in other tough-to-get-to locations, EMAPS' novel algorithms also associate critical environmental data, such as radiation or radio frequency signal levels, with map locations.

The basic EMAPS unit is an approximately 6-inch cube that weighs less than 4 pounds and includes a 270-degree laser scanner that measures the distances to walls and features in the environment.

"EMAPS virtually takes pictures with every step," says Jason Stipes of APL's Force Projection Department. "Using this technology, we can map almost every nook and cranny of targeted locations, capture that intelligence, and store it. Sensors can also detect threats, such as radiation or chemicals, and include them in our map."

A second laser scanner is available to allow 3-D data collection, while an inertial sensor measures the roll, pitch, and yaw of the system to compensate for steps taken by the user. In addition, a removable camera system can be used to capture omnidirectional images along the walker's path. A GPS receiver can be connected to EMAPS to allow for georegistration of the data, and an onboard computer stores and processes data in real time.

Stipes says EMAPS has collected more than 100 hours of mapping data from a wide array of GPS-denied environments, including ships, underground storage facilities, Army training areas, and buildings such as the Smithsonian's National Museum of Natural History. The maps include paths that are several miles long, in environments ranging from office buildings to complex engine rooms of ships at sea.