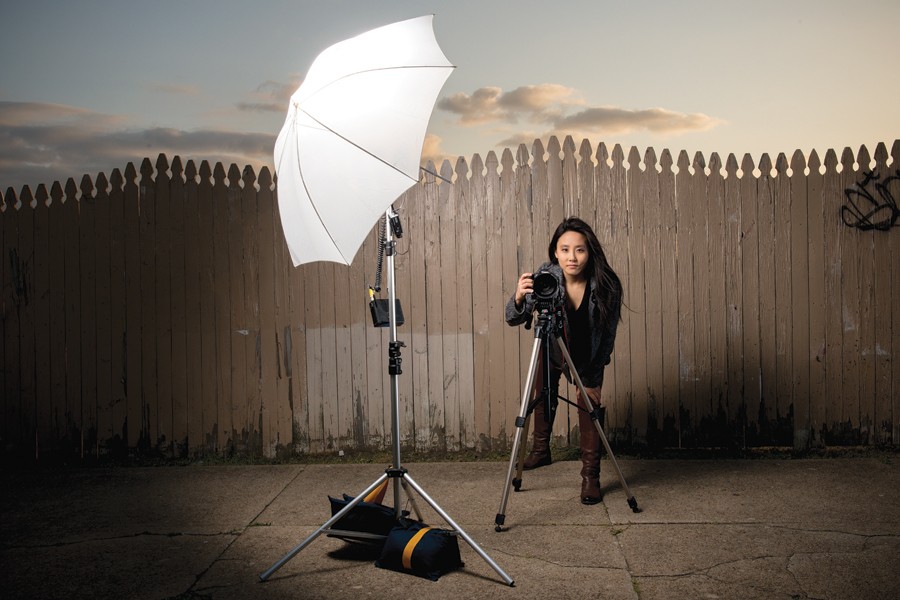 Mary Han knew very little about documentary filmmaking when she took on her project to capture the controversial 25th Street Station development in Baltimore's Remington neighborhood.

She also knew very little about the multiyear mixed-use development itself.

But Han did know that as a recipient of a four-year Woodrow Wilson Undergraduate Research Fellowship, she had been given the freedom to pursue something she might not otherwise have had the opportunity to try.

"I'm really interested in making documentaries, but I had no experience," says Han, a Cerritos, Calif., native. "I knew I would make mistakes, and I wanted to just see what happens. If I make mistakes, I'll learn from them."

For Han, a psychology/pre-med major, the fellowship represented an opportunity to explore a field that interested her but that she had zero formal training in. Her exposure to the creative medium of filmmaking was as a viewer,particularly of psychology-related documentaries. With this fellowship, she had a chance to delve in as the creator.

Documentary filmmaking turned out to be much harder than she thought. There were so many elements to consider, from operating the audio and video equipment—especially as a solo operation—to conducting successful interviews and finding a flow for the unscripted content.

"You have to make it captivating and at the same time informative," says Han, who finished her course work in December and will receive her degree at this month's Commencement ceremony.

Often, aspiring documentarians think that coming up with a good idea is the hard part and that executing a solid movie is easy, says Han's mentor, John Mann, a senior lecturer in the Film and Media Studies Program. But not Han. She understood that she was naive to the process and that it would be a difficult one—one she was eager to learn.

"No documentary filmmaker knows how to do it when they begin," says Mann, adding that even courses like the ones he teaches aren't as valuable as jumping in and doing it.

But where to begin such a daunting, open-ended undertaking? That can be tough for a deadline-motivated student. Han says that Mann advised her to make a list of people she wanted to interview, and just pick up the phone.

That first interview, with Benn Ray, founder of Atomic Books on Falls Road and a neighborhood activist, was daunting, and Han recalls being flustered. But she soon became more comfortable with the approach. Rather than rely on her list of questions, she would have conversations, really listening to the subject. Later, she could scrutinize the footage to see what she had captured.

Two months before her time at Johns Hopkins would end, she was editing what would be a 27-minute film, which she hopes to submit to PBS and film festivals. Han ultimately interviewed roughly 20 people—residents, members of neighborhood alliances, business owners, developers, and local officials. She selected the subject in early 2011, during her sophomore year, after brainstorming other ideas. While tutoring adult GED students in the Remington area, she had gotten to know many residents there and learned that the topic was on the minds of many in the neighborhood.

What made her project even more difficult than she had imagined was the complex nature of 25th Street Station, a development introduced a few years ago and approved by the city last year. Many residents fought the development, which is slated to include a Wal-Mart, arguing that a big-box retailer would destroy local businesses and overwhelm the community with traffic. The plans have been held up with appeals, and the project's future remains uncertain.

Han recognized the uncertainty and the controversy, and wanted to avoid telling the stale, one-sided "big-box retailers are evil" story. And indeed, that wasn't the story she discovered in her research.

"It's easy to sort of antagonize or make the big-box store the bad guy because that's something that's been done many times before," Han says.

The developers were doing their best to communicate with the community, holding meetings and soliciting feedback, Han notes. And the residents with whom she spoke were excited about the venture, which would bring jobs and retail within walking distance. Even local officials who may have ideologically opposed the proposal voted in its favor, choosing to work with developers rather than fight it, she says.

"Things are not as simple as they appear once you look closely at it," she says.

Of course, not all documentaries have to be objective, Mann says, and that approach can be more difficult than using the film as a platform. But Han was good at it, he says. She may have had an opinion about the plan, but her interview subjects, and later her viewers, would have no idea. That's a valuable skill for filmmaking, he says, as empathy and engagement can yield far better interviews.

"She was unbelievably intellectually open to the idea," Mann says. "Everyone felt very comfortable with her. People would like her on the spot, and that's what, frankly, makes a good documentary maker."

Perhaps one of the biggest lessons Han learned was "to just go for it and not be scared," she says. "I'm a person that loves schedules and planning. Doing something like this where you have minimal control over what can happen is pretty terrifying. There is no script. You have to work with what you're given."

That exercise in overcoming those fears will likely serve Han well in her next endeavor. She has received a Fulbright Scholarship and will travel to South Korea to teach English and pursue documentary filmmaking.

Han's family is from South Korea, and she has spent a couple of weeks there on vacation. But living there for a year, working and pursuing her passion for filmmaking, will be an entirely different experience, she says.

"It's a huge culture change, a totally different lifestyle," Han says. "Hopefully, doing the Woodrow Wilson project in some ways prepared me for that." Indeed, her time spent pursuing the documentary encouraged her to be more open-minded and willing to get out of her comfort zone, and less afraid to jump right in.

"Often in anything you do, you don't know the outcome," she says. "You have to be comfortable with that and just go for it."