JHU baseball player has two other passions: science and math 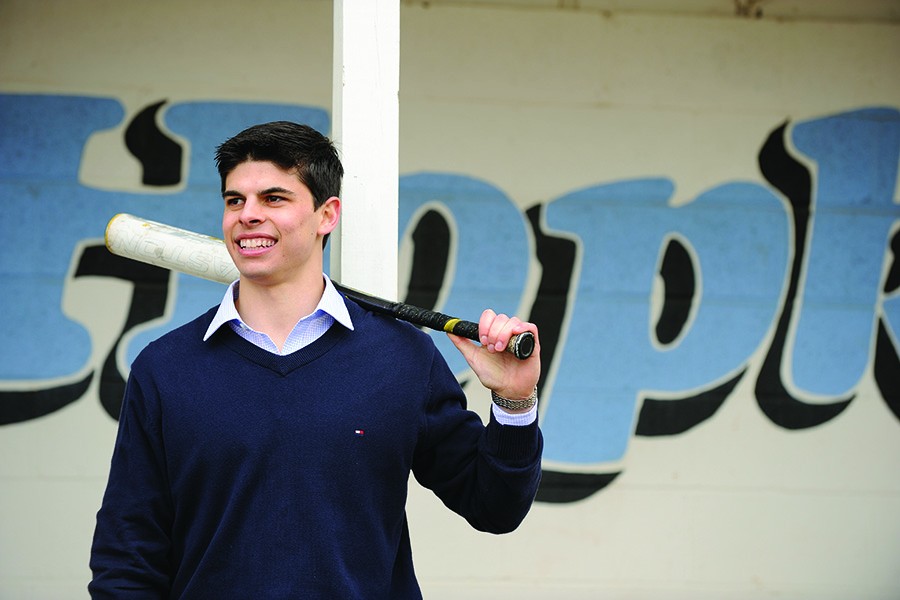 Like many on the deep Blue Jays baseball roster, Adam Weiner had to wait his turn.

The Delaware native and two-sport star in high school spent the majority of his freshman and sophomore years tethered to the bench. When asked where he stood on the depth chart, Weiner smiles and says "the bottom."

Weiner was not used to watching the action. In high school, he captained both the baseball and football teams—playing shortstop and quarterback—and in baseball earned All-State and All-Conference honors, in addition to being named Team MVP his senior year.

"It was a tough transition for me, and something I had to overcome," he says. "I eventually came to understand how the program [here at JHU] worked. It's really competitive, and you have to bide your time, but that is what makes us all better, and that is why this program has historically been so successful."

Still, Weiner says, he wondered if his chance would ever come.

To complicate matters, he dislocated his finger while sliding back to first base in an early spring practice his junior year.

The finger had only begun to heal when Weiner got a surprising invitation to join the team for its junket to Arizona. Each spring, the Blue Jays play an early-season binge of games in either Arizona or Florida to escape the winter conditions in Baltimore. Johns Hopkins coach Bob Babb typically invites around 30 players, established starters and those he feels can compete for playing time.

"It's a big deal to get invited to come out with the team," says Weiner, now a senior. "He gives everyone a chance to get at least one start."

Weiner made the most of his.

In his first at-bat, Weiner laced a triple off the wall, the first hit of his college career. He wound up going four for five, and made some smooth plays in the field, including a diving backhand deep at short.

Weiner kept playing well and eventually cemented his place in the starting lineup. With team star Kyle Neverman entrenched at shortstop, Weiner had to shift to second base, which he says suited him, his coaches, and his dislocated finger fine.

"Adam could always run and hit, but with the [long] throws you sometimes held your breath, and hurting his finger certainly didn't help his throwing accuracy," says Babb, adding that Weiner has made an easy transition to second.

With 30 starts to his credit, Weiner ended last season with a .337 batting average and, despite batting ninth, finished fifth on the team in hits and second behind Neverman in steals. He also had a dramatic walk-off home run, the first of his career, against conference rival Washington College.

But don't look to Weiner for many more long balls, he says. He considers himself more of a singles and doubles hitter. "I just try to hit the ball hard on the ground and run hard on the bases. My speed is my best offensive tool."

At second, he solidifies a strong infield that includes fellow seniors Neverman and first baseman Jeff Lynch, both named NCAA Division III Players to Watch for 2013 by Collegiate Baseball magazine.

Weiner comes from a baseball-mad family. Northern New Jersey natives, both parents are passionate Yankees fans, as is Adam, who grew up idolizing Derek Jeter. His father was a catcher at Bucknell University, and his mom played catch with Adam in the backyard.

In a small charter high school in Wilmington, Del., Weiner developed a love of science and math that even supersedes his passion for baseball.

Off the field, the mechanical engineering and physics major has excelled at Johns Hopkins. He currently boasts a 3.98 GPA, near the top of his class, and is helping design a particle image velocimetry system to be used by other undergraduates studying fluid dynamics.

Andrea Prosperetti, the Charles A. Miller Jr. Distinguished Professor of Mechanical Engineering, calls Weiner a student "superman" with a critical, penetrating mind. This past summer he interned for three months at global electronics and electrical engineering giant Siemens at the company's location in Nuremberg, Germany. At Siemens, he focused his time on optimizing the design of hybrid systems for large-scale uses, such as in trains, buses, and industrial applications such as mining trucks and tractors.

"I never learned so much in my life or been so technically challenged," he says.

Even while in Germany, baseball was never far from Weiner's mind. He subscribed to MLB.tv to watch Yankees games, and practiced batting off a tee at a nearby schoolyard.

"There I was, hitting balls into a screen somewhere in the middle of Germany," he says. "I got some weird looks by little kids."

Babb says that one of Weiner's greatest strengths is his work ethic.

"He has this incredible discipline and an overall desire to be successful. He is also patient and intelligent, and mature beyond his years," Babb says. "That is why he is able to wear so many hats." (One hat includes tutoring Babb's teenage son in physics.)

Weiner often stays around in the practice facility for extra hitting practice or to take extra ground balls. In the weight room, he is one of the first in and last out. Somehow, he also finds time to hit the books.

Weiner attributes his academic success to hard work and passion. "I really enjoy what I'm doing. I never find it hard because it's so enjoyable," he says. "I love the subjects that I'm studying. And I think playing baseball helps. It keeps me focused and on a schedule. And my teammates push me harder than anyone, on the field and academically."

Weiner admits that while physics plays a large role in baseball, the two aren't simpatico off the playing field.

"Baseball is a lot of trying not to think too much and just be natural," he says. "Physics is the exact opposite. You dig deeper and deeper into the minute details and try to work things out."

When a ball is coming at you at 90 miles an hour, he says, you don't really have time to dwell on the details. 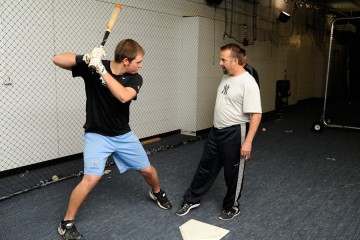