Johns Hopkins will break with a 130-year tradition of independence in men's lacrosse, seeking to compete in an NCAA Division I conference, President Ronald J. Daniels announced last month. 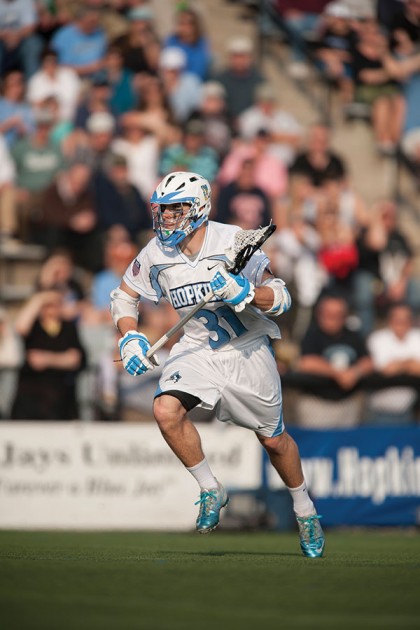 Daniels accepted the recommendation of a committee of alumni, faculty, and staff that he appointed in March. The committee unanimously backed joining a league in a sport in which Johns Hopkins, competing as a lone wolf, has traditionally been dominant. The president said he agreed with the committee that, given recent wholesale shifts in conference alignments and the national growth of lacrosse, joining a league for the first time "will provide our university and history's most-successful lacrosse program the best opportunity for continued leadership at the highest level of intercollegiate competition."

He said in a message to students, faculty, and staff that he had concluded that the move "is the best course for our athletes, our program, and our university and ... can be done without compromise to our academic integrity or athletic traditions." Daniels, Athletics Director Tom Calder, and Coach Dave Pietramala will be the key players in the search for a conference affiliation, which could begin as soon as 2015. The Blue Jays expect to remain independent next season. Calder says he has received expressions of interest from several conferences but no formal offers.

Pietramala calls the decision to seek a conference home a "monumental" one.

"We'll continue to do our homework, learn about the conferences, trying to figure out what's the best fit for our lacrosse program and what's the best fit for us institutionally," the coach says. Factors to consider, he says, include a good academic fit with conference schools, prospects for national competitiveness, scheduling opportunities, and "a host of things," including—in the end—whether any league actually invites the Blue Jays in.

Among Pietramala's and Calder's priorities in the search are preserving as many games as possible with traditional rivals such as Navy, Maryland, Syracuse, Virginia, and North Carolina; and preserving local rivalries. They say it is also critical to protect the university's ties with ESPNU, which broadcasts all Blue Jays home games and recently renewed that relationship for four more years.

Johns Hopkins fielded its first men's lacrosse team in 1883 and has won or shared 44 national championships, more than any other school. Those titles include nine since lacrosse became an NCAA sport. The Blue Jays also represented the United States in the 1928 and 1932 Olympics.

"When you say 130 years of tradition, make no mistake, that weighed heavily on all of us," Pietramala says. "This decision was not taken lightly."

But Calder says that a recent wave of conference shifting—both in lacrosse and more generally across Division I—means that Johns Hopkins might find traditional rivals unavailable for regular season games in years to come. Daniels also noted that the champions of conferences with automatic qualification are assured an NCAA tournament slot, and that nonchampion league members can qualify at-large.

Independents, with only the at-large route into post-season play, are at a disadvantage. Two teams with losing records made the NCAA field this year by winning conference tournaments, while Johns Hopkins finished 9-5 but missed the playoffs for the first time in 42 seasons.

"I don't know if you're going to make everybody happy," Pietramala says of possible reaction to the decision. "But after doing an awful lot of research, getting a lot of feedback—and tradition and history being a big part of that—at this time, with the state that athletics is in, and the state that lacrosse is in, this is the best decision to secure the future of Hopkins lacrosse and continue the tradition of Hopkins lacrosse, which is to compete for a national championship."

The committee told Daniels that affiliating with a conference in one sport would not require dues or a direct financial commitment beyond a possible increase in the team travel budget. It also would not result in sharing of conference revenues. The university would not be subject to conference rules other than those covering lacrosse specifically.

The committee proposed seeking an initial five-year term of league membership, with protection for Johns Hopkins' spot on the conference roster should another full member adopt men's lacrosse. The university expects to continue moving toward Division I independent status in women's lacrosse, and remains completely committed to Division III in all other sports.

The committee report is available at http://web.jhu.edu/administration/president/lacrosse_committee.