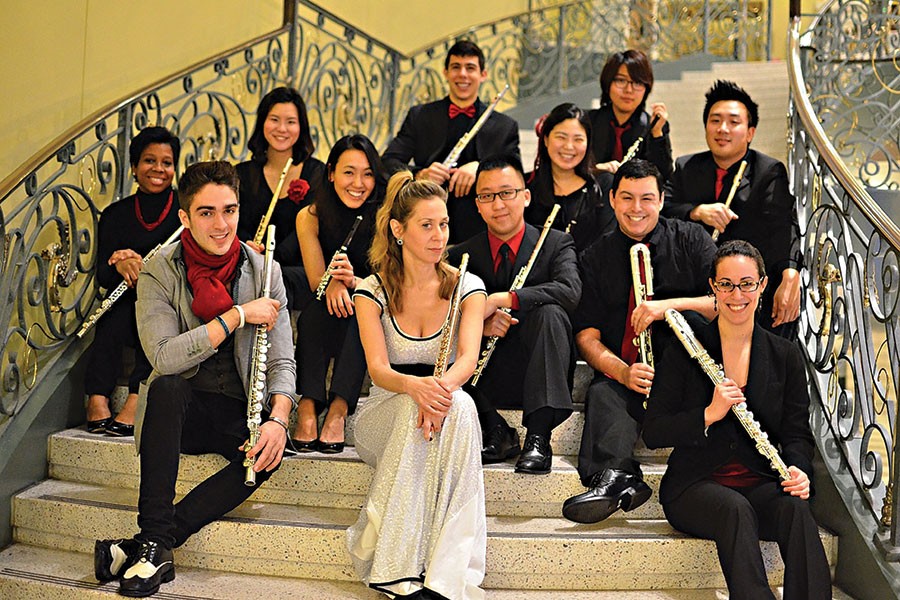 Experience has taught Marina Piccinini that the sublime takes work. The Peabody Institute faculty member and virtuoso flutist knows that the leap from the good performance to the one that sends chills down the spine is attainable. Musical erudition allows a performer to understand a piece of music, the context of its creation, and sometimes the composer's intentions. Technique gives a performer the skills to master the mechanics of a score. And physical conditioning prepares the body to do those skills. But the line between good and great isn't haphazard. It's the result of hard, interpretive exploration of the relationships between performer and instrument, performer and score, performer and sound.

Piccinini works on all of those elements with students during her International Flute Master Classes at Peabody, which take place this year from June 23 to 28. "You're searching to try to find out what the answer is, how to present it so that it's something that communicates to the audience," Piccinini says of playing a piece, a process she goes through with her students. How she communicates that series of actions depends on the student. "Sometimes people come and they're physically very restricted, and you can see it's a little bit about them being nervous. So before you can even get to that, you have to find the key that gets inside their imagination. And when you do that, it's amazing because they relax and they smile and then they're on fire."

Speaking by phone from her home in Vienna, Piccinini explains how her summer program is different from the usual master class setup, where a performer or composer works with students for a day onstage in front of an audience. Her five-day master classes are an immersion in the Peabody experience. Students, who range from undergraduate age to postgraduates, start each morning with warm-up exercises before the four-hour master classes with Piccinini begin. Over the course of the week, each student plays three different pieces for her and she, flute in hand, interacts with them one on one.

"It's always very entertaining because, after all, it is a performance, so there's a lot of laughing that goes on, a lot of play acting," she says. "Sometimes I can put the flute to my lips and I play, and then they know exactly what I mean, or they have a feeling. And that's a beautiful thing because you can bring the whole room to you. There's a way of playing that you can feel the audience getting really quiet and listening. And that aura, that tension in the room, because we were together during this process, they can have that in their imagination forever. And if they have it in their imagination, they will remember that and find their own way of re-creating that. And then, of course, that's when you've opened the door and they walk through it."

Piccinini supplements these master classes with movement and breathing workshops, lectures and presentations from flute makers from around the world, question-and-answer sessions with guest artists, and opportunities to work with top-notch pianists and Peabody students, creating a setting "that will promote every single aspect of what it is to be a musician," Piccinini says.

The week kicks off with a June 23 opening gala, featuring a repertoire of five flute pieces that concludes with Henry Brant's Angels and Devils, a 1932 composition for solo flute and flute orchestra, performed by Piccinini and her current Peabody students. A free public recital June 28 will showcase the master class students performing pieces they worked on during the week. It's a chance to see the results of Piccinini's work with the musicians. And it serves as a reminder to the students that what they've been doing—all that intensive fine-tuning to make a performance as great as it can be—that's the performer's job. The work of constantly refining and understanding technique, score, physicality, and interpretation is the only way greatness can be achieved.

"You're always learning [as a musician], and it wouldn't be any fun if you didn't," Piccinini says. "What I'm doing, what [the students are] doing, it's all the same. And for them to see that, I think, is also hugely important. It's not a magic trick. It's a part of the process. Every famous musician they know, that's the way they live their lives."