Policymakers, researchers, and high-profile advocates from across the nation convened at the Johns Hopkins Bloomberg School of Public Health on May 1 to address the needs of child sex trafficking survivors in the United States. The first-of-its-kind symposium focused on children, mostly female, who have been victims of commercial sexual exploitation. 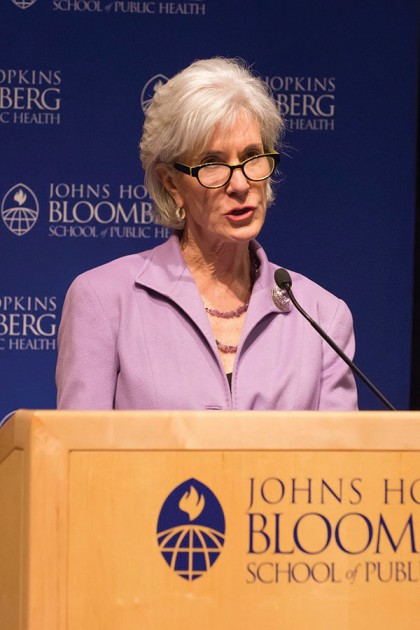 Presenters during the morning session included Kathleen Sebelius, secretary of the Department of Health and Human Services; Mohamed Mattar, professor of international law at SAIS and executive director of the Protection Project; Dina Habib Powell, president of the Goldman Sachs Foundation; and fashion designer Tory Burch, founder of the Tory Burch Foundation. They agreed that child sex trafficking is an issue that needs to be attacked from many fronts, including public health, technology, and law enforcement.

"The issue of child trafficking is one that really touches all of us," Sebelius said. "It's an issue that as a parent goes right to your heart. When any of us hear about a child who is exploited, abused, or, certainly, enslaved, we first start to think about, What if that were my child? ... That feeling is what we need to capture and propel the action that we take here today."

Sebelius said that President Barack Obama and his administration have made addressing child trafficking a priority across all agencies of federal government. They are working on the local level with faith-based groups, she said, providing in-person training to first responders, and have set up a national child trafficking hotline in an effort to identify victims. That hotline fielded more than 20,000 calls in fiscal year 2012, Sebelius said, up 74 percent from 2010. She said it's a positive sign that more victims are willing and able to reach out for help.

"One of the cruelest aspects of child trafficking is that it erodes a child's sense of their own humanity," she said. "When young people are treated as less than human by the adults around them, at an age when those cues matter so much, they can't help but take this message to heart. Through public awareness efforts and training, we are helping to ensure that survivors hear a very different message."

In the afternoon session, Mayor Stephanie Rawlings-Blake welcomed everyone to Baltimore for this "critical, groundbreaking symposium." She said that the city's children, especially those who are victims of abuse or are runaways, are often lured into the sex industry, noting that the average age of entry into prostitution in Maryland is 12.

"We must ensure that we're doing all that we can to protect our children from these criminal vultures who take advantage of some of our most vulnerable citizens," she said.

Withelma "T" Ortiz Walker Pettigrew, a survivor, advocate, and 2011 Glamour magazine Woman of the Year, said that the foster care system in the U.S. too often sets up children to be exploited or be vulnerable to abuse. Pettigrew was in foster care and for five years, starting at age 10, was led into a life of massage parlors, strip clubs, and other forms of exploitation. After telling her personal story, she called for action, not just talk, and received a standing ovation.

Rebecca Campbell, a professor of psychology at Michigan State University, spoke about the flaws in the criminal justice system in dealing with victims of sexual abuse. Most reported sexual assaults are not prosecuted, she said, and contact with the criminal justice system too often has a negative impact on the victims. They are bombarded with questions, many of them of a personal nature, which can be "a harrowing experience."

"The norm of the system is to put the person on trial before he or she even opens up their mouth," she said.

The afternoon session also featured Gov. Martin O'Malley and Virginia Gov. Bob McDonnell. McDonnell called sex trafficking "evil" and pledged to further support law enforcement efforts. "It's the trafficker and the buyer that are the criminals," he said.

In May 2011, McDonnell signed legislation that provided additional tools to combat human trafficking in Virginia and expanded services for victims. The law notably made it possible for sex traffickers in that state to be prosecuted even if their victims don't testify against them, and it expanded penalties for those convicted.

O'Malley called the practice an "insidious crime" and "modern slavery," and he echoed a sentiment heard throughout the day: that the open sharing of information across jurisdictions and agencies is necessary in the fight against trafficking.

Survivor and advocate Elizabeth Smart, who at age 14 was kidnapped from her bedroom in Salt Lake City, spoke of her nine-month abduction. She cautioned against judging victims or questioning why they simply don't run from their captors, and she said it's important that children realize their "value" and know that they can fight back.

Smart ended on a note of hope: "We can make this world a better place," she said.

The symposium—co-hosted by the Bloomberg School and the Advisory Council on Child Trafficking—brought together leading experts on mental health research, law enforcement, survivor advocacy, disruptive technology, epidemiology, criminal justice, and public policy to better inform the treatment of victims of sex trafficking. The second session of the event, May 2, was closed to allow working groups to generate recommendations related to policy and research.