Student invention could save kids in overheated cars 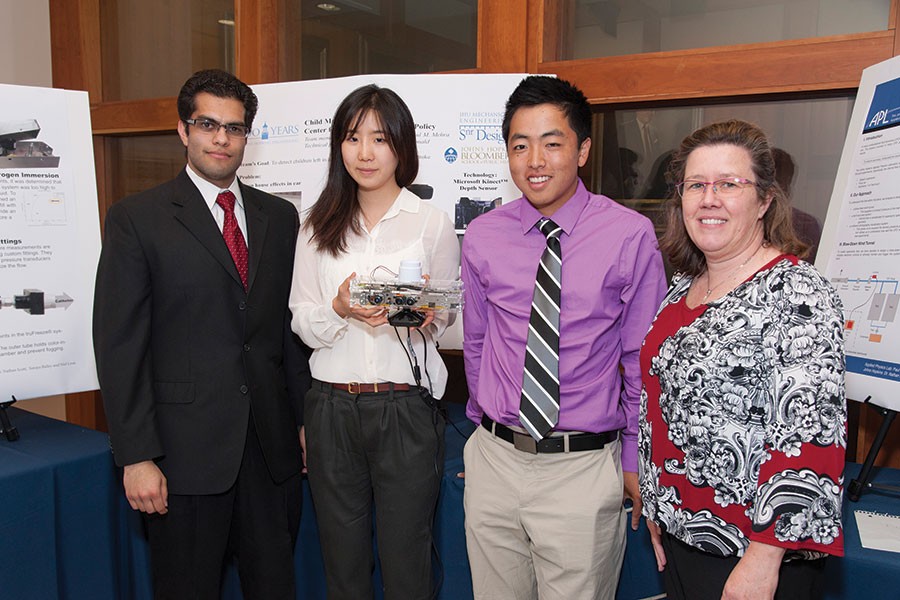 Image caption: Unveiling their child-detection prototype at a senior design showcase are mechanical engineering majors Anshul Mehra, Yejin Kim, and Jeffrey Kamei; at right is their faculty sponsor, Eileen McDonald, of the Johns Hopkins Center for Injury Research and Policy.

It's a parent's worst nightmare: A young child is accidentally left in a locked car on a warm and sunny day; the closed windows turn the car into a greenhouse, and the child dies of heatstroke.

In a key first step toward preventing such tragedies, three undergraduate engineering students at Johns Hopkins have turned technology from a popular video game player into a detector for children left behind in dangerously overheated vehicles. The young inventors tinkered with parts from a Kinect motion-sensing device, normally used with the Xbox 360 game console, and came up with the heart of a new system aimed at "seeing" children left in locked cars and summoning help.

Although the project needs further work, the students' sponsor said that the proof-of-concept prototype is a significant move toward reducing the number of children lost in locked-car incidents.

"These are preventable deaths that deserve our attention," says Eileen McDonald, a faculty member in the Johns Hopkins Center for Injury Research and Policy, part of the university's Bloomberg School of Public Health. "The students showed that they could detect even the tiniest movements associated with a child left in the back seat of a car. We don't have a perfect model yet, but we're hoping another group will pick up where they left off and bring it closer to becoming a commercial product."

The project was developed during a two-semester senior design course offered by the Whiting School's Department of Mechanical Engineering. In the course, teams of three or four undergraduates are given a small budget to design and build a prototype requested by a sponsoring business or organization. This year's projects were unveiled at a showcase conducted shortly before the students were scheduled to graduate.

McDonald and her center challenged a team to address a public health problem documented in a 2012 study released by the National Highway Traffic Safety Administration. According to the report, 527 heatstroke-related deaths involving children left in cars had been recorded in the United States since 1998, an average of 38 a year. The study, conducted by researchers at Children's Hospital of Philadelphia, cited the circumstances surrounding these deaths: In 51 percent of the cases, the caregiver had forgotten the child was in the car; in 30 percent, the child was playing in an unattended vehicle; and in 17 percent, an adult intentionally left the child in the vehicle. (The remaining 2 percent did not fit within these categories, or the circumstances were unknown.)

The NHTSA report also included testing results of several safety devices already being sold to alert parents that a baby or toddler had been left in the vehicle. The report stated that "the devices were inconsistent and unreliable."

McDonald asked the team of Jeffrey Kamei, Yejin Kim, and Anshul Mehra to come up with a better way to prevent such deaths, and encouraged them to produce a passive protection system that would operate without requiring the driver to flip a switch or hook a wristband to the child to activate it.

During brainstorming sessions last fall, the students hit on the idea of adapting the Kinect video game technology. The device uses an infrared camera and projector to sense the movements of a game player and incorporate these motions into what is happening on the video screen. The students thought the same technology could sense even the most-subtle movements of a baby sleeping in a car's rear seat.

An important advantage of using infrared technology, the students say, is that it cannot penetrate glass windows, so it is unlikely that a movement outside the car, such as a pedestrian or a passing vehicle, could accidentally trigger the motion detector. But inside a car, early tests indicated that the sensor should be able to quickly pick up a baby or toddler trapped or sleeping inside.

Although the largest hurdle has been cleared, additional work must be done to complete and test the system before it can become a commercial product. First, researchers will have to license Microsoft's Kinect technology or develop equipment that works in a similar way.

Also on the drawing board are several options for the system to summon help when a trapped child is detected. These could include a loud alarm or an automated call to police or firefighters, or to a car security service such as OnStar.

As they prepared for graduation, the student inventors said they had gained valuable real-world engineering experience while launching a project that could have significant public health value. When the project opportunities were posted last fall, "this was my first choice," says Mehra, who lives in Baltimore. "Within my culture in India, family is very important. This was a project that could help prevent a big family tragedy."

"At first, it was just a cool idea, and then it evolved," says Kamei, who is from Downey, Calif. "I think it definitely has a lot of potential."

"I'm glad we were able to build something that could protect babies," adds Kim, a citizen of South Korea who completed her high school studies in Texas.