Jeffrey Kahn, the Levi Professor of Bioethics and Public Policy at the Berman Institute of Bioethics, will serve as committee chair for NASA's Institute of Medicine study into the ethical and policy issues related to crew health on exploration class missions beyond low Earth orbit and for extended durations. The committee, which includes a former astronaut, physicians, and legal, policy, science, and occupational health experts, held its first public meeting on May 30 in Washington, D.C.

Maria Merritt, a core faculty member in the Berman Institute of Bioethics, has been inducted into the Delta Omega Alpha chapter of the national public health honor society. Merritt also has a faculty appointment in the Bloomberg School's Department of International Health.

The Johns Hopkins Montgomery County Campus has received the 2013 Visionary Award from the Montgomery County Chamber of Commerce. The award, presented June 6 during the organization's 54th annual dinner, "recognizes an individual or an organization for its innovation and tremendous contributions to the county and beyond." The MCC was established in 1988 as a cooperative venture with the Montgomery County government to fulfill economic development objectives and to continue Johns Hopkins University's tradition of excellence in research and education.

George Bigelow and Maxine Stitzer, both professors in the Department of Psychiatry and Behavioral Sciences' Behavioral Pharmacology Research Unit, have received the 2013 Award for Scientific Translation from the Society for the Advancement of Behavior Analysis at the Association for Behavior Analysis International Conference. They were recognized for their pioneering research in the effective use of positive reinforcement in drug abuse treatment. Their early translational research with effective incentive-based contingency management has been widely studied and adopted as an evidence-based treatment intervention.

Jennifer Haythornthwaite, a professor of psychiatry in the Department of Psychiatry and Behavioral Sciences and director of the Center for Mind-Body Research, is the recipient of the 2013 Vice Dean's Award for the Advancement of Women presented by the Johns Hopkins Office of Women in Science and Medicine.

Bethany Sacks, an assistant professor of surgery, has been named a National Association for Biomedical Research representative.

Addiction Treatment Services, a community-based program that provides methadone maintenance and outpatient drug abuse treatment services for patients with opioid dependence and other substance use and psychiatric disorders, has been recognized by the Substance Abuse and Mental Health Services Administration with a 2013 Science and Service Award for the Treatment of Opioid-Related Disorders.

Timothy Baker, a professor in the Division of Health Systems and Management in the Department of International Health, was selected by the board of directors of the Baltimore City Medical Society to receive the BCMS Lifetime Achievement Award. The award was presented at the April 27 meeting of the MedChi House of Delegates.

Valeria Culotta and Ying Zhang are among six scientists pursuing novel and promising directions in Lyme disease research who have been awarded grants from the Lyme Research Alliance. Culotta, a professor of biochemistry and molecular biology, will study the role of manganese and iron in the cellular workings of the Lyme bacterium, Borrelia burgdorferi. Zhang, a professor of molecular microbiology and immunology, will assess the activity of the drug Pyrazinamide against "persisters," Borrelia that become tolerant to antibiotics and later rebound to start a new wave of infection.

Fang Han, a student in the Biostatistics Graduate Program, received the International Chinese Statistical Association Student Paper Award at the joint conference of ICSA and the International Society for Biopharmaceutical Statistics, which was held in June in Bethesda, Md.

A study by Guitar faculty members Serap Bastepe-Gray and Julian Gray and Master of Music candidate David Sobel was accepted for presentation at the 2013 Symposium of the Performing Arts Medical Association in conjunction with the Aspen Music Festival and School. The study examines a successful and speedy return to instrumental performance following injury through the implementation of a three-pronged program. The symposium will take place this month in Snowmass, Colo.

Faculty artist Joe Burgstaller, trumpet, toured Taiwan in May, performing and giving master classes at Soochow and National Tainan universities, and appearing with the Sound of Kaohsiung Wind Ensemble. Also in May, he previewed his new CD, License to Thrill, on SiriusXM Pops, leading the radio audience in the first SiriusXM Pops National Sing-Along, featuring his composition "Within."

Faculty artist Denyce Graves, mezzo-soprano, appeared in Opera St. Louis' premier production in June of Champion by Pulitzer Prize–winning playwright Michael Cristofer and composer Terence Blanchard. Graves played the mother of Emile Griffith, a prizefighter responsible for the death of his opponent in a fight for the welterweight world championship in 1962.

Music Theory faculty member Joel Puckett has been commissioned by the Crossing to compose a 15-minute unaccompanied work for 24-voice chamber choir. The Philadelphia-based choral ensemble has been awarded the 2013 Dale Warland Singers Commission Award, created to recognize a chorus entering into a partnership with a composer of its choice, to contribute a new work to the choral repertoire. The award is given by Chorus America, in partnership with the American Composers Forum, and was presented in June at Chorus America's National Convention in Seattle. Puckett's new work will be a main feature of the Month of Moderns Festival being held in summer 2015 in Philadelphia.

Justin Frosini, an adjunct professor of constitutional law and director of the Center for Constitutional Studies and Democratic Development at SAIS Bologna, was awarded one of Bocconi University's 2013 Excellence in Research Awards for his book Constitutional Preambles: At a Crossroads Between Politics and Law, published in 2012.

Jason Brandt, a professor of psychiatry and neurology, and director of the Division of Medical Psychology in the Department of Psychiatry and Behavioral Sciences, has been awarded the 2013 Lawrence M. Garten Award for Leadership Excellence by the Abilities Network, a Maryland-based organization that provides comprehensive services to people with epilepsy and other conditions that hinder full community integration.

Amanda Nickles Fader, an associate professor of gynecologic oncology, has been named director of the Kelly Gynecological Service, as well as director of the Minimally Invasive Surgery Center in the Department of Gynecology and Obstetrics. Nickles Fader is an internationally recognized expert on minimally invasive women's cancer surgery and the link between obesity and cancer.

Stephanie Fraley, a postdoctoral research fellow who is developing novel approaches to quickly identify bacterial DNA and human microRNA, has won the prestigious $500,000 Burroughs Wellcome Fund Career Award at the Scientific Interfaces. The prize, distributed over five years, helps transition newly minted PhDs from postdoctoral work into their first faculty positions. The goal of Fraley's work is to develop engineering technologies that can diagnose and guide treatment of sepsis, a leading cause of death worldwide, while simultaneously leading to improved understanding of how human cells and bacterial cells interact.

Julie A. Freischlag, the William Stewart Halsted Professor and director of the Department of Surgery, was elected the first female president of the Society for Vascular Surgery, and Bruce A. Perler, chief of the Division of Vascular Surgery and Endovascular Therapy, was elected vice president of the society at its annual meeting, held May 30 to June 1 in San Francisco.

Adil Haider, an associate professor in the Division of Trauma Surgery, has been named a representative to the Society for Black Academic Surgery.

Stephen Meltzer, a professor of medicine and oncology and director of the Early Detection Biomarkers Laboratory in the Department of Gastroenterology, has won the 2013 American Cancer Society's Clinical Research Professor Award. The $80,000 provided annually for five years will support his research on the pathogenesis of esophageal adenocarcinoma and Barrett's esophagus.

Jeremy Nathans, a professor in the school's Institute for Basic Biomedical Sciences and a Howard Hughes Medical Institute investigator, has been recognized by the Stanford University Medical Center Alumni Association with the Arthur Kornberg and Paul Berg Lifetime Achievement Award in Biomedical Sciences. Nathans earned both his PhD and MD at Stanford.

Timothy Pawlick, a professor and chief of the Division of Surgical Oncology and director of the Liver Tumor Center, has been elected to the presidency of the Association of Academic Surgery for the year 2014–15; he will serve as president-elect for 2013–14 before beginning his one-year term as president.

Thao "Vicky" Nguyen, an assistant professor of mechanical engineering, has received the American Society of Mechanical Engineers' initial Sia Nemat-Nasser Early Career Award. Nguyen was recognized for her research into the complex mechanics of the eye, with potential applications to conditions including glaucoma. The award will support her work aimed at understanding how mechanical loading influences the growth and remodeling of collagen tissue in experimental glaucoma mouse eyes subjected to chronic intraocular pressure elevation. This work has the potential to improve the study and treatment of diseases and conditions ranging from glaucoma to cardiac fibrosis and tendon injuries. The award was established in 2008 by the ASME's Materials Division as a divisional award; in 2013, it was elevated to a society award to recognize research excellence in experimental, computational, and theoretical mechanics and materials.

Keith Quesenberry, a full-time lecturer in the Center for Leadership Education, received an honorable mention for his research report "How to Integrate Social Media" from Advertising Age, the American Academy of Advertising, and Temerlin Advertising Institute at Southern Methodist University. The research-paper competition was created by Ad Age in 2012 to uncover the best academic thinking around marketing and advertising business problems. Quesenberry's paper, co-authored with Michael K. Coolsen of Shippensburg University, offers five practical methods for successfully listening to and engaging with consumers through research, crowdsourcing, branded content, customer evangelism, and customer service. 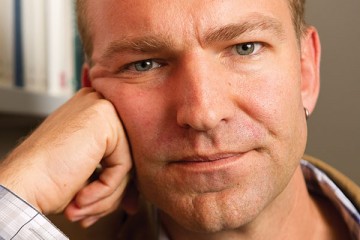