Blue Jays scheduled to begin play in new league in 2015 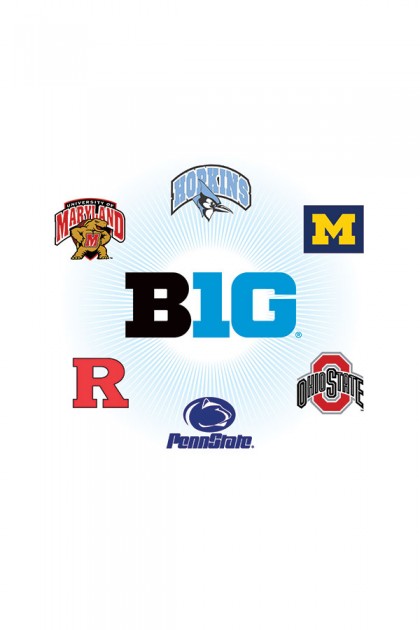 University President Ronald J. Daniels announced last month that the men's lacrosse team has been accepted as an affiliate member of the Big Ten's new lacrosse conference, scheduled to begin play during the 2015 season.

"This decision may represent the single greatest change in Johns Hopkins men's lacrosse in more than a century," Daniels said at a press conference held at the university's Cordish Lacrosse Center to announce the move. "I am grateful for the thoughtful process that has led us to this historic place, and I am confident in the success of our shared endeavor in the years to come."

In addition to Daniels, the press conference was attended by Johns Hopkins director of Athletics Tom Calder, Blue Jays head coach Dave Pietramala, Big Ten commissioner James E. Delany, and members of the university committee formed to explore the idea of joining an NCAA Division I conference for men's lacrosse. The committee had voted unanimously to seek a conference affiliation.

Johns Hopkins is the first affiliate member in Big Ten history. Delany says there are no current plans to add another before the start of conference play in 2015.

The ever-changing landscape of college lacrosse led Calder and Pietramala in spring 2012 to consider conference affiliation. While fully aware of the history of the Johns Hopkins men's lacrosse program as an independent, both realized that national conference realignment was making the challenges of scheduling even more difficult, and the opportunity to earn an automatic bid to the NCAA Championship through a conference was something that needed to be explored.

"Division I lacrosse has changed so much in the past 10 years," Calder said. "If we had not moved forward, then I think we would have not done the right thing for our lacrosse program."

With six men's lacrosse teams, the Big Ten will receive one of the automatic bids to the NCAA Championship. Currently, 16 teams are selected to compete each year in the tournament. NCAA rules allow for up to 50 percent of the tournament field to be composed of teams receiving an automatic bid.

"The goal each season for our men's lacrosse team always has been, and always will be, to compete for the national championship," Calder said.

Johns Hopkins has been an independent in men's lacrosse since the program began play in 1883. Since then, JHU has produced 44 national championships, nine NCAA titles, 183 First Team All-Americans, and 65 members of the National Lacrosse Hall of Fame.

At the press conference, Delany said that there was a "strong desire" for the Big Ten to align with Johns Hopkins, and to build relationships in the mid-Atlantic region.

"Johns Hopkins University is one of the top academic institutions in the country, and its men's lacrosse program has been one of the nation's best since it was founded in 1883. Lacrosse is a unique part of the culture on the East Coast and is an emerging sport both among our current schools and across the country," Delany said. "The addition of Johns Hopkins will give us the opportunity to launch Big Ten men's lacrosse in 2015, and we look forward to working with their administrators, coaches, student-athletes, and fans in preparation for their first conference season."

The teams are no strangers. Johns Hopkins and Maryland have competed since 1895, and the Blue Jays added Michigan to the schedule during the 2013 season. Johns Hopkins and Rutgers have played each other since 1920. And for the 2014 season, Johns Hopkins had announced the addition of Ohio State to the regular season schedule.

The familiarity with the programs set to form the new Big Ten was a key element in the decision-making process, Pietramala said. "This move allows us to maintain the greatest rivalry in college lacrosse, with the University of Maryland; add several nationally recognized programs to our schedule; and maintain a number of national and local rivalries we have in place," he said.

Calder said that Johns Hopkins' entry into the Big Ten will not affect the university's current contract with ESPNU, which broadcasts all regular-season home games and some away games. The contract runs through the 2017 season.

Once conference play starts, however, some Big Ten away games could be shown on the Big Ten Network, which is broadcast to 52 million homes in the United States and Canada.

Before the start of conference play, the coaches of the six lacrosse schools will work with administrators from the Big Ten to develop a governance plan. Among items to be considered are the addition of a conference tournament, individual honors and awards, and regular season scheduling.