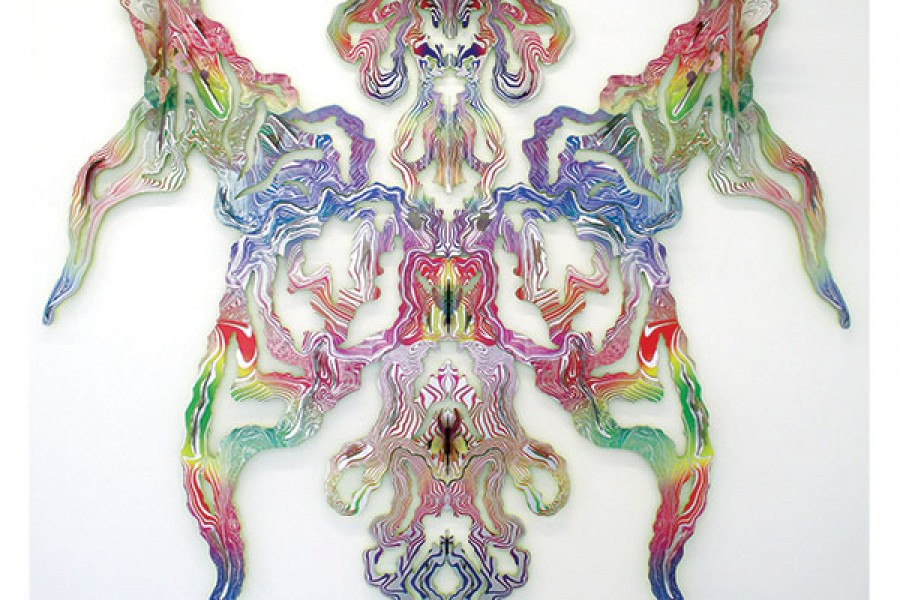 Image caption: ‘Greater Black Astral Dripper,’ one of Jimmy Joe Roche’s monumental sculptures in the two-person show that opens this month at the Baltimore Museum of Art and runs through Sept. 29.

"Peacing Out" is a bizarre two-minute, 22-second video ride into the far side of artist Jimmy Joe Roche's brain. Roche, the digital video specialist at the Johns Hopkins Digital Media Center and an adjunct faculty member in the Krieger School's Program in Film and Media Studies, portrays the lone character in the short. It opens on what looks like a room's dark corner, the kind that monsters or psychos jump out of in scary movies. The mood here isn't tense, thanks to an electronic carousel-like melody on the soundtrack. A smudge emerges from the murky black, which comes into focus as Roche's face, digitally tinted red and blue. He drifts forward like a submerged buoy rising to the surface. He's seen only from the waist up, wearing a dark coat and fingerless gloves. His raised left hand offers two fingers V-d into a peace symbol.

The video is one of the seven Roche works included in the two-person show Front Room: Nathaniel Mellors and Jimmy Joe Roche that opens at the Baltimore Museum of Art on July 3, and for nearly 90 seconds it is an obtuse study of incipient boredom. And just as the figure appears to start sinking back into the muck, a series of fireworks erupts on-screen, before the character smudge vanishes into the dark.

"I like that piece a lot, actually," Roche says. He sees it as a compact metaphor for the creative process. "It's kind of like the grinding, insular world of art making that can be so intimate and quiet and strange and cerebral, and then there's these moments of inspiration or color that are completely explosive and maybe even dangerous."

Roche, 31, is a lean reed of loquacious skepticism, and in conversation moves from reflective discussion of his art process to thoughtful consideration of visual culture in 2013, when commercial digital technology enables the do-it-yourself amateur to make images as professionally polished as corporate advertisements.

Roche's artwork was partly catalyzed in the loosely organized Wham City collective, a creative hive of artists, musicians, and writers from SUNY Purchase who began migrating to Baltimore in 2004. He trained as an analog filmmaker at SUNY Purchase, then turned to video while earning his MFA from MICA, posting his short dispatches from popular culture's id on YouTube in its early years. Thanks to the Internet's reach, his videos were seen by curators and tastemakers who grouped Roche with an emerging generation of digitally savvy, aspiringly subversive artists who used the Internet as a gallery. His films were included in festivals, screenings, and exhibitions, from the Royal Academy of Art's Psychosomatic Acid Test in London in 2009 to the Multiplicidade Festival in Rio de Janerio in 2011.

During the same time he made large-scale cut-paper sculptures that visually recall Native American totems, kinetic Rorschach blots, and the gorgeous natural world illustrations by 19th-century zoologist/philosopher Ernst Haeckel. "I've always loved to draw, but I've never been satisfied with my drawings," Roche says, explaining that he turned to cut paper as a drawing process. "But with my sculptures there's, maybe, 20 forms that I use. There's a vocabulary, and it's not that robust. And once I reduced the vocabulary of drawing, it liberated the sense of drawing within me [and] enabled me to access all these things that I could never really draw."

These sculptures are impressive, works of transformative imagination that visually graft inner space psychology onto biological organisms. Roche debuts a new work fabricated from aluminum and tin in the BMA exhibition, and even in small digital photos its monumentality is hard to pin down. There's a slippery beauty to its fluid lines and design, laced with a restless uncertainty in its towering size and engulfing presence.

And Roche knows that his creative thought process is something he's constantly refining and rethinking. "I'm an artist for better or for worse, and I'm still learning a lot," Roche says. "Not to say that I don't know what I'm doing, but I'm still trying to weave a bunch of things together. I think there's a philosophy of art that's in me that hasn't fully cultivated itself yet. And I think my path is going to take a long time to get where I'm going."