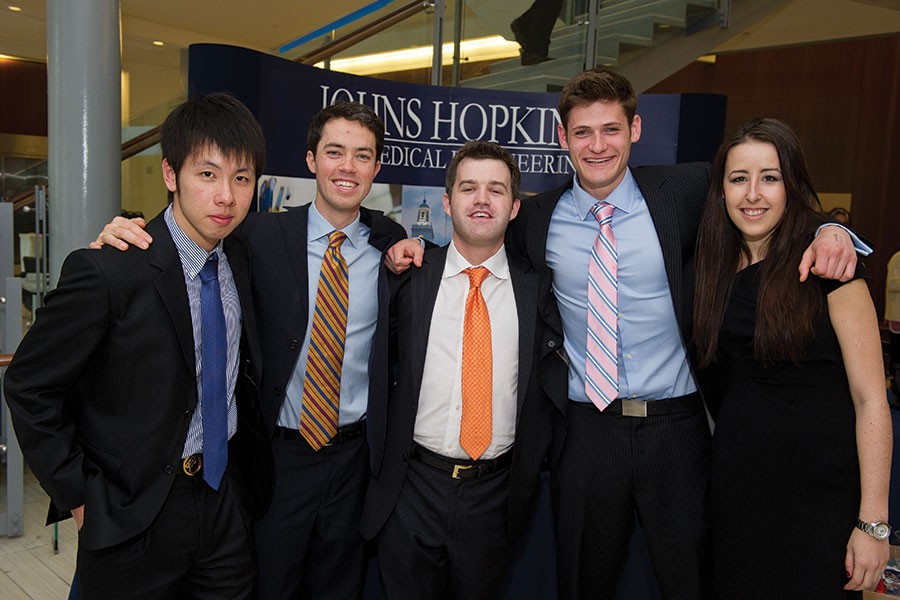 The honors were announced June 19 in Philadelphia by the National Collegiate Inventors and Innovators Alliance as it concluded its annual Biomedical Engineering Innovations, Design, and Entrepreneurship Awards competition. Johns Hopkins student teams previously earned first place in this competition in 2012, 2010, and 2007.

This year's first-place winner, awarded $10,000, was EchoSure, developed by five Johns Hopkins graduate students. The device emerged during a yearlong master's degree program that required student teams to identify an urgent health care problem and then design and test a solution.

The EchoSure team focused on a setback that can occur during free flap reconstruction. In this treatment, healthy tissue is transplanted from one part of a patient's body to another to help repair a region that has been damaged by cancer or an injury. The procedure, performed on 50,000 patients annually in the United States alone, requires doctors to connect blood vessels from the transplanted tissue to veins and arteries in the target location. In up to 15 percent of these cases, nonpreventable blood clots form after surgery, and if they are not found and removed promptly, the reconstruction will fail.

To help prevent this, the students devised an internal marker and ultrasound software system to monitor blood flow in the transplant area and give doctors an early warning when a clot begins to form. The team members who developed the system were Kaitlyn Harfmann, Ting-Yu Lai, Adam Lightman, David Narrow, and Devin O'Brien-Coon. "Our team has seen firsthand the consequences for patients when vascular complications are not detected early enough to salvage a surgery," Narrow says. "EchoSure has the potential to prevent thousands of surgical failures and otherwise unnecessary re-operations."

At Johns Hopkins, the EchoSure team worked within the Center for Bioengineering Innovation and Design, which brings students, faculty researchers, and physicians together to develop new medical devices and business strategies to help move them toward commercial use. CBID operates as a part of the Department of Biomedical Engineering, which is shared by the university's schools of Medicine and Engineering.

All five student inventors received their master's degrees in May. They plan to form a startup company to seek additional funding and advance the EchoSure prototype toward clinical use.

"All of the BMEidea prize money we just won is going back into the project," says O'Brien-Coon, a Johns Hopkins Hospital plastic surgery resident who completed the CBID program this year to obtain an additional degree in biomedical engineering. His teammate Narrow says he had not been certain EchoSure would finish at the top. "It was a pretty exciting moment when we realized we had won first prize because we were very impressed with the other two finalist projects," Narrow says.

A team from Stanford University received the $5,000 second-place prize.

The $2,500 third-place prize went to a device invented by Adriana Blazeski and Susan Thompson as JHU biomedical engineering doctoral students. (Thompson received her diploma in May.) The two were recognized for developing the Gala Pump, a hands-free, concealable, and quiet breast pump designed to allow nursing mothers to discreetly pump in the presence of others. The inventors said their device eliminates the need for bulky vacuum pumps so that milk collection can be contained in a compact system that fits comfortably and securely into an undergarment.

The concept came from Thompson, who was struggling to incorporate a healthy and efficient pumping schedule into her routine when she returned to work and graduate school after having her first child two years ago. She conferred with other new mothers, conducted additional research, and set out to design a more discreet and effective breast pump. She teamed up with fellow graduate student Blazeski and formed a company, DS Labs, to develop the device. The concept received an early seed grant from the Johns Hopkins-Coulter Translational program, based in the Department of Biomedical Engineering. The women's company, however, is not connected with the university.

The students named their device Gala because the word means milk in Greek and is associated with a Greek myth about the creation of the Milky Way. Thompson says that she and Blazeski are preparing to seek approval to test their prototype on nursing mothers. They plan to then begin approaching investors for funding. The new contest award will help. "Participating in the BMEidea competition has been such an exciting honor," Thompson says. "The winnings will go straight toward facilitating the institutional review board process, liability insurance, and further refining the prototype so that the Gala Pump can help moms worldwide." 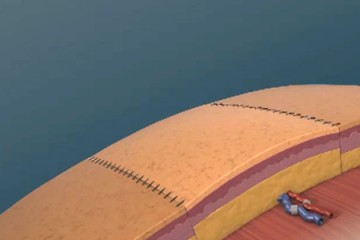