Hopkins Baja's race: Dirty job, happy to have done it

The Hopkins Baja team won first place in the maneuverability event at the Baja SAE World Challenge competition held in June at the Rochester Institute of Technology. It was the first first-place trophy in the history of the club's program. 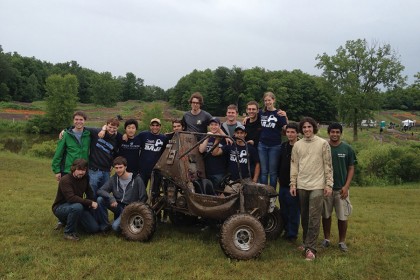 Image caption: The Hopkins Baja team with the mud-covered car they built on the Homewood campus. The racer took first place in the maneuverability event in the Baja SAE World Challenge competition.

Johns Hopkins' maneuverability run, on a twisty and muddy track, beat out that of host RIT's car by 1.12 seconds. The team's driver, Alex Robert, an exchange student from Switzerland, drove the car on dirt for the first time the weekend before the competition.

For the event's endurance race challenge, the Johns Hopkins team had to think on its feet. On the second lap, an obstacle snapped the vehicle's front left knuckle, a custom piece for which the team had no replacement. Instead of throwing in the towel, the JHU students managed to fit a factory Polaris ATV part onto the car and got it back on the track.

"It was extraordinary to see the car back out there knowing what had just happened," team leader Andrew Kelly says. "It's a real testament to the great teamwork demonstrated throughout the weekend."

Hopkins Baja finished in sixth place in the acceleration event and ended up 39th out of 100 cars overall in the competition. 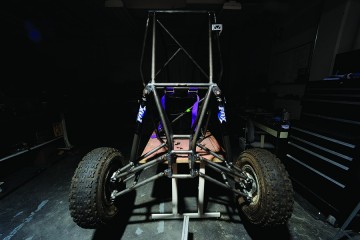 Published April 2013
Hopkins Baja team builds an off-road racer from scratch, without directions, a kit, or a final grade / Gazette