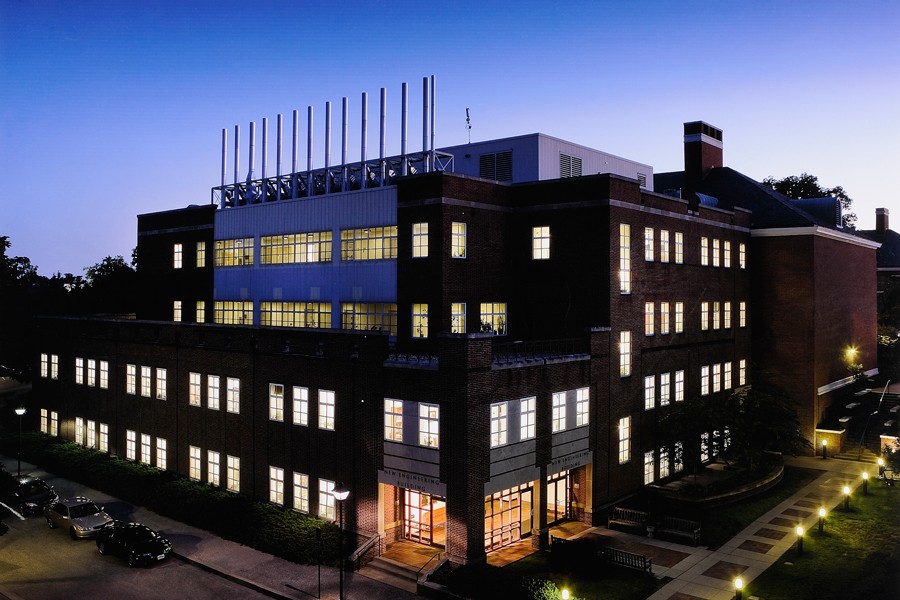 Image caption: In recognition of a $5.4 million gift and a lifetime of support from 1956 graduate L. Gordon Croft, the already built New Engineering Building on the Homewood campus will be renamed Croft Hall.

L. Gordon Croft, a 1956 Johns Hopkins graduate, has made a $5.4 million commitment to the university's Whiting School of Engineering. The gift will be used by Nicholas P. Jones, the school's Benjamin T. Rome Dean, to invest in a range of programs, including funding for junior faculty and an undergraduate scholarship for a student with financial need who is a member of the Phi Kappa Psi fraternity.

We are immensely grateful to Gordon Croft for this gift," Jones says. "Through his career, Gordon has proven to have a unique ability to see value and potential, and we are honored that he has decided to make such a generous commitment so we can invest in multidisciplinary initiatives like the Institute for NanoBioTechnology, which will address some of society's most pressing challenges. We look forward to celebrating the impact of this gift with Gordon and his family not only now but in the years ahead."

In recognition of this gift and a lifetime of support, the New Engineering Building on the Homewood campus will be renamed Croft Hall.

Jones described Croft as "a most dedicated alumnus," citing his extensive record of support for financial aid and research. Croft has established endowments for an undergraduate scholarship to support students from his native Port Tobacco in Charles County, Md., who are admitted to study engineering at Johns Hopkins. Croft also has funded four graduate fellowships and a junior professorship for research in energy. In 2006 he endowed the Billig-Croft Lecture in honor of his friend, the late Frederick Billig, a widely respected Johns Hopkins graduate who conducted research at the university's Applied Physics Laboratory.

Croft himself graduated from Johns Hopkins with a bachelor's degree in industrial engineering.

He went on to build the highly respected Croft Leominster Investment Management Co. in Baltimore, which he manages with his two sons. Croft and his wife, Jane, who reside in Baltimore, have three children—Kent, Carol, and Russell—and nine grandchildren.

Croft Hall is adjacent and connected to Shaffer Hall on the Wyman Quadrangle. It provides 38,000 square feet of office and research space. The building currently houses the Department of Computer Science and serves as headquarters for the Johns Hopkins Institute for NanoBioTechnology, its Center of Cancer Nanotechnology Excellence, and its Engineering in Oncology Center. The institute draws on the expertise of more than 200 clinicians, medical researchers, scientists, and engineers from across the university to create new knowledge and technologies at the interface of nanoscience and medicine. Since its creation in 2006, the institute has attracted more than $60 million in interdisciplinary research funding.

The Whiting School provides academic instruction in a wide range of disciplines in nine undergraduate departments, 10 graduate departments, Engineering for Professionals (part-time), and the Center for Leadership Education. In addition, the school operates 23 research centers and institutes. Currently, the Whiting School has 1,663 undergraduates, 958 full-time graduate students, and more than 2,000 part-time grad students.