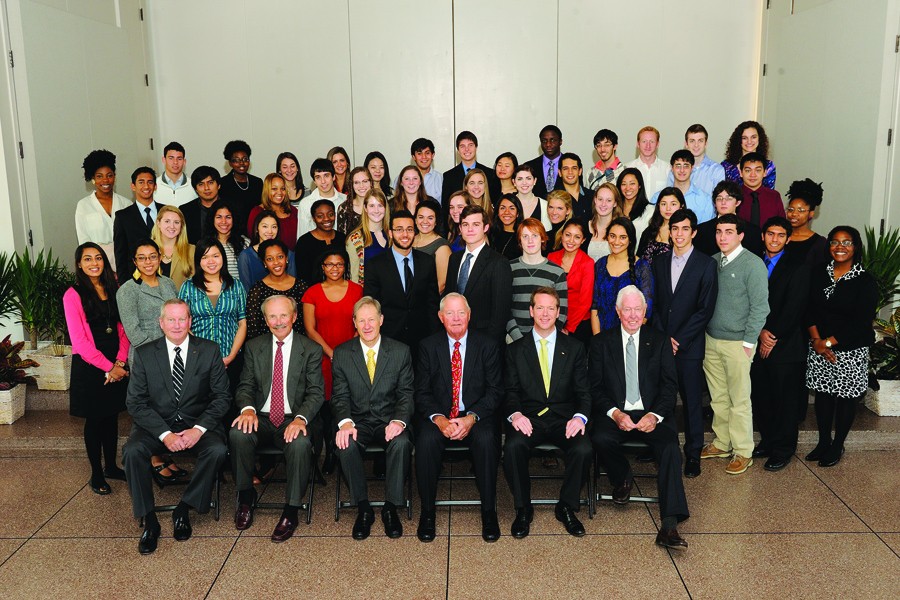 Image caption: Seated in front of the Hodson Scholars and Hodson-Gilliam Success Scholars are the six members of the Hodson Trust board. In the center of the first row behind them are Mohamed Hamouda, left, and Wyatt Larkin.

The Hodson Scholarship is awarded on the basis of academic merit and currently provides partial tuition support for 74 students.

The Hodson-Gilliam Success Scholarship (named in memory of James Gilliam, former member of the Hodson Trust board) replaces loan in the financial aid package and currently supports 61 outstanding students from underrepresented minority groups and others.

Since 1958, the Hodson Trust has awarded annual grants to Johns Hopkins University that have funded priorities across the campuses, including the construction of Homewood's Hodson Hall.

For 2012, the trust is providing more than $2 million for undergraduate scholarships, research in oncology, and the Hodson Curator of the University Archives, bringing the trust's cumulative contribution to more than $76 million.

The Hodson Trust was settled in 1920 by the family of Col. Clarence Hodson, who grew up in Maryland. Hodson believed that credit should be available to the average American, a revolutionary idea in 1914, when he founded the Beneficial Loan Society. Beneficial became part of Household International, now HSBC, in 1998.