WMAP results based on nine years of observations 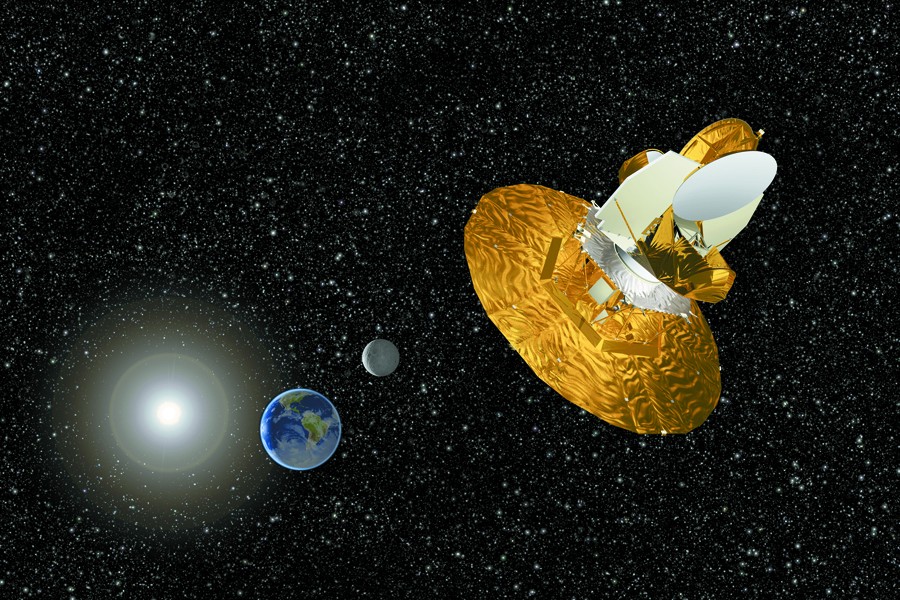 Image caption: WMAP was the first spacecraft to use the sun-Earth second Lagrange point, or L2, as its permanent observing station. This point is a million miles from Earth in the direction opposite the sun. In this artists image, WMAP is seen at the L2 point with the sun, Earth, and moon behind it as it scans the cosmos. The James Webb Space Telescope will be headed to L2 as well.

Since its launch in 2001, the Wilkinson Microwave Anisotropy Probe space mission has revolutionized our view of the universe, establishing a cosmological model that explains a widely diverse collection of astronomical observations. Led by Johns Hopkins astrophysicist Charles L. Bennett, the WMAP science team has determined, to a high degree of accuracy and precision, not only the age of the universe but also the density of atoms, the density of all other nonatomic matter, the epoch when the first stars started to shine, the "lumpiness" of the universe, and how that lumpiness depends on scale size.

In short, when used alone (with no other measurements), WMAP observations have made our knowledge of those six parameters about 68,000 times more precise, thereby converting cosmology from a field of often wild speculation to a precision science.

Now, two years after the probe "retired," Bennett and the WMAP science team have released its final results, based on a full nine years of observations.

"It is almost miraculous," says Bennett, the Alumni Centennial Professor of Physics and Astronomy and a Johns Hopkins Gilman Scholar in the university's Krieger School of Arts and Sciences. "The universe encoded its autobiography in the microwave patterns we observe across the whole sky. When we decoded it, the universe revealed its history and contents. It is stunning to see everything fall into place."

WMAP's "baby picture of the universe" maps the afterglow of the hot, young universe at a time when it was only 375,000 years old, a tiny fraction of its current age of 13.77 billion years. The patterns in this baby picture were used to limit what could have possibly happened earlier, and what happened in the billions of years since that early time. The (misnamed) "big bang" framework of cosmology, which posits that the young universe was hot and dense, and has been expanding and cooling ever since, is now solidly supported, according to WMAP.

WMAP observations also support an add-on to the big bang framework to account for the earliest moments of the universe. Called "inflation," the theory says that the universe underwent a dramatic early period of expansion, growing by more than a trillion trillion-fold in less than a trillionth of a trillionth of a second. Tiny fluctuations were generated during this expansion that eventually grew to form galaxies.

Remarkably, WMAP's precision measurement of the properties of the fluctuations has confirmed specific predictions of the simplest version of inflation: The fluctuations follow a bell curve with the same properties across the sky, and there are equal numbers of hot and cold spots on the map. WMAP also confirms the predictions that the amplitude of the variations in the density of the universe on big scales should be slightly larger than smaller scales, and that the universe should obey the rules of Euclidean geometry so the interior angles of a triangle add up to 180 degrees.

Recently, noted theoretical physicist and cosmologist Stephen Hawking commented in New Scientist that WMAP's evidence for inflation was the most exciting development in physics during his career.

Gary F. Hinshaw of the University of British Columbia, who is part of the WMAP science team, says that "WMAP observations form the cornerstone of the standard model of cosmology.

"Other data are consistent, and when combined we now know precise values for the history, composition, and geometry of the universe," he says.

WMAP has also provided the timing of the epoch when the first stars began to shine, when the universe was about 400 million years old. The upcoming James Webb Space Telescope is specifically designed to study that period that has added its signature to the WMAP observations. WMAP launched on June 30, 2001, and maneuvered to its observing station near the second Lagrange point of the Earth-sun system, a million miles from Earth in the direction opposite the sun. From there, WMAP scanned the heavens, mapping out tiny temperature fluctuations across the full sky. The first results were issued in February 2003, with major updates in 2005, 2007, 2009, 2011, and the final release in December 2012. The mission was selected by NASA in 1996, the result of an open competition held in 1995. It was confirmed for development in 1997 and was built and ready for launch only four years later, on schedule and on budget.

"The last word from WMAP marks the end of the beginning in our quest to understand the universe," says Johns Hopkins astrophysicist Adam G. Riess, whose discovery of dark energy led to his being named a co-recipient of the 2011 Nobel Prize in physics. "WMAP has brought precision to cosmology, and the universe will never be the same."