President Emeritus was an architect of today's Johns Hopkins 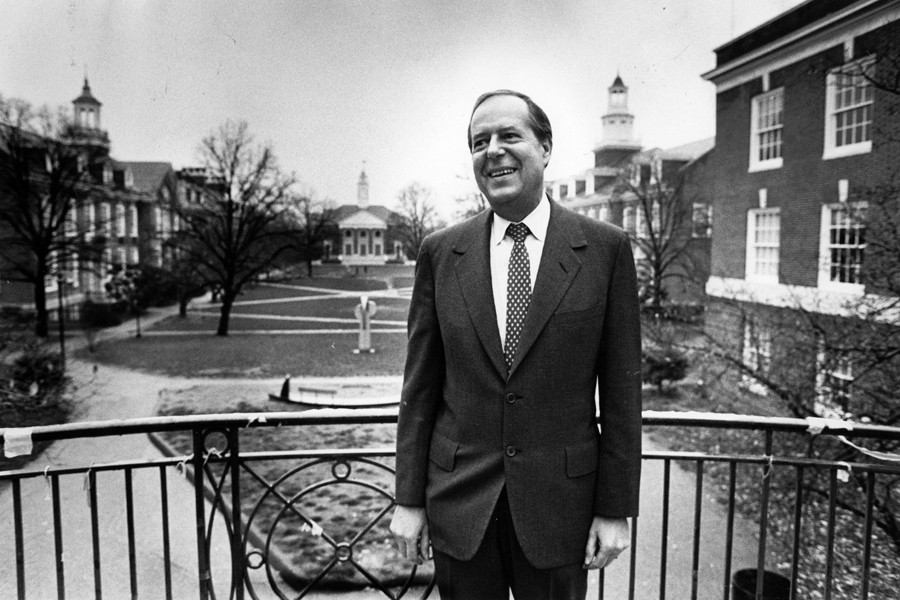 Image caption: Steven Muller on the Homewood campus in December 1988

A visionary leader, Muller led the university from 1972 to 1990 and served for about a decade as the head of the hospital.

"The university where we teach, learn, work, and engage in scholarly endeavors simply would not exist in its current form had it not been for Steve Muller," Daniels said.

Muller joined Johns Hopkins as provost in 1971 and served in that position for just 10 months before the board of trustees selected him in 1972 to lead the university as its 10th president. That same year, he was tapped to head the hospital, making him the first since Daniel Coit Gilman, the university's first president, to hold both offices. Muller relinquished the hospital post in 1983, continuing on as president of the university.

He created the affiliation with the Peabody Institute that led to the once financially troubled independent institution becoming a strong and vital division of the university. His commitment to arts and culture also resulted in the restoration and reopening of what are now Homewood Museum and Evergreen Museum & Library.

Muller was instrumental in bringing the Space Telescope Science Institute to the Johns Hopkins Homewood campus in Baltimore, ensuring that science operations for the Hubble Space Telescope would be controlled there and creating enormous collaborative opportunities for the university's Physics and Astronomy faculty. That faculty now includes two Nobel Prize winners, Adam Riess and Riccardo Giacconi, who won the physics prize in 2011 and 2002, respectively. The STScI building, which now bears Muller's name, stands across the street from the university's Bloomberg Center for Physics and Astronomy, also built during Muller's presidency.

Muller, with prescient insight into China's future as a global power, ensured that Johns Hopkins would be an in strumental part of the conversation between that nation and the United States, establishing the Johns Hopkins–Nanjing University Center for Chinese and American Studies in 1986.

On Muller's watch, the university also established the Krieger Mind/Brain Institute and academic centers for part-time students in Baltimore and Montgomery County, Md., and at the Applied Physics Laboratory.

His foresight also led to the re-establishment—as a stand-alone division of the university for the first time—of the School of Nursing, acknowledged just a few decades later as one of the nation's best. He also re-established the Whiting School of Engineering as a separate division after it had been merged with the School of Arts and Sciences.

Muller also was a leader in the expansion and modernization of what is now the Johns Hopkins Bayview Medical Center campus following Johns Hopkins' acquisition of the old City Hospitals from Baltimore City.

A skilled fundraiser, Muller financed much of the university's growth with dollars raised in two highly successful campaigns: the Hopkins Hundreds Campaign, which raised more than $109 million for the university and hospital between 1973 and 1976; and, later in his tenure, the Campaign for Johns Hopkins, which brought in more than $600 million, well exceeding its $450 million goal.

A man of both substance and style, Muller is credited with moving the university into a new era while preserving its tradition of leadership among research institutions.

"Steve Muller made enormous contributions to Johns Hopkins," says university Vice President and Secretary Emeritus Ross Jones, a longtime friend and aide. "He was able to interpret the university to broad audiences, linking its history and its goals for the future. His connection with his audiences motivated many people to step forward and support Johns Hopkins at levels not seen previously, which resulted in a much larger endowment, increased faculty and students, and new facilities on the institution's campuses."

A specialist in comparative government and international relations—whose many writings include a textbook on these subjects and numerous professional articles—Muller was a passionate advocate of the humanities. He will forever be remembered for musing that "nobody ever died of English" while arguing for the need to support the humanities as vigorously as medicine and the life sciences.

In 1983, Muller established the American Institute for Contemporary German Studies, fostering meaningful relationships between the United States and his native Germany, which he and his family had fled in 1939. In recognition of his contributions to German-American relations, Muller was awarded the Commander's Cross of the Order of Merit by the president of the Federal Republic of Germany in 1980. In 1988, he also was named Commendatore by the president of Italy.

His tenure also included overseeing the early years of co-education at the Homewood schools. The 93-year tradition of an all-male university had ended in fall 1970, when 90 female undergraduates (21 freshman commuters; the others, transfer students) enrolled. The first dorms for women were opened in 1971.

Muller came to Johns Hopkins that year from Cornell University, where he was vice president for public affairs and, before that, director of the Cornell University Center for International Studies. He also held a tenured appointment as associate professor of government.

Muller was born in Hamburg, Germany, in 1927. When he was 10 years old, his father, Werner Muller, a lawyer in Hamburg who had earned an Iron Cross in World War I, was incarcerated on Kristallnacht, a night when Nazis conducted coordinated attacks against Jews throughout Germany. Months later, Werner Muller was released from prison, presumably on the orders of Hermann G&ouml;ring, founder of the Gestapo, who had also served in World War I and felt that his comrades who had fought for Germany in that conflict should be freed.

The Muller family fled Germany in 1939, first to London and, then, in 1940, to the United States. On the advice of doctors, because Muller's father had asthma, the family settled in Los Angeles. Muller attended Hollywood High and earned money selling The Saturday Evening Post and other magazines. He was "discovered" by a scriptwriter outside Schwab's Drugstore and subsequently had roles in seven feature films alongside such actors as Ingrid Bergman, Roddy McDowall, and Irene Dunne.

But education overtook acting and he enrolled at the University of California, Los Angeles, graduating in 1948. In 1954, he earned a degree in politics from Oxford University, where he was a Rhodes Scholar, before earning his doctorate at Cornell.

During his time at Johns Hopkins and into his retirement, Muller sat on numerous boards and was a member of many scholarly and professional organizations and associations. After leaving the presidency, he maintained offices at Evergreen Museum & Library in Baltimore and at the School of Advanced International Studies in Washington, remaining involved in the Johns Hopkins community. He was awarded an honorary doctorate of humane letters by Johns Hopkins in 2000, praised in the accompanying citation as "one of the most important links between our youth as a start-up experiment of a university and our maturity as one of the great institutions of the world."

In retirement, Muller chaired the board of St. Mary's College of Maryland and played a key role in transforming the school into Maryland's public honors college. He was honored by St. Mary's in January 2004 with the Order of the Ark and the Dove.

Muller served on numerous corporate and nonprofit boards. He was a director of Alex. Brown, Beneficial Corp., CSX, Millipore, Safeway, Van Kampen Funds, and the Atlantic Council, and he served as chairman of the board of directors of the Federal Reserve Bank of Richmond.

He also was a member of the American Academy of Arts and Sciences, the International Biomedical Research Alliance, the American Association of Rhodes Scholars, the Council on Foreign Relations, and the International Institute for Strategic Studies. He served twice as a director of the German Marshall Fund of the United States and also was a member of the Presidential Commission on White House Fellowships and the Presidential Commission on World Hunger.

Muller is survived by his wife of nearly 13 years, Jill E. McGovern; two daughters, Julie M. Mitchell of San Francisco and Elizabeth M. Casparian of Princeton, N.J.; five grandchildren; and a brother, Norbert Muller of Edwards, Mo. His first wife, Margie Hellman Muller, to whom he was married for 48 years, died in 1999.

At 11 a.m. on Jan. 22, Johns Hopkins campuses around the world held a moment of silence "to pay tribute to a man of vision and determination who was in many ways responsible for the Johns Hopkins we know today," President Daniels said.

Personal memories and messages of sympathy to Muller's family can be left on the tribute website at web.jhu.edu/administration/president/tributes/muller. Plans for a memorial service at Johns Hopkins, tentatively planned for this month, will be posted on the website as soon as they're finalized.