More than five decades after closing its center at the University of Rangoon, SAIS—along with the broader Johns Hopkins community—is rebuilding ties to Myanmar (Burma's name since 1989), a country in the midst of restoring democracy as it emerges from a half century of isolation and military rule.

SAIS' ties to Myanmar date back to 1954, with the opening of the Rangoon-Hopkins Center. Based at Rangoon University, "RanHop" was SAIS' first overseas program and served as a base for a small number of students to conduct field research in Southeast Asia. Once the military government under Gen. Ne Win came to power, the center closed its doors in 1959.

Karl Jackson, director of Asian Studies and the Southeast Asia Studies Program, and Jae Ku, a 2003 SAIS PhD recipient and director of the school's U.S.-Korea Institute, are leading SAIS' efforts to assist Myanmar with economic and political reforms. The re-engagement began in January 2010 but gathered momentum in January 2012, when Johns Hopkins President Ronald J. Daniels headed a delegation of six university professors and administrators, including Jackson and Ku, to Myanmar to explore possible collaboration in the fields of health and education.

"Everyone with whom we spoke—from President Thein Sein to recently released political prisoners—believed Myanmar was entering a new and open era," Jackson says. "As in any transition, setbacks are to be expected, but the most significant changes in the last 50 years are under way and deserve support from the outside world."

In March and October, the Mac-Arthur Foundation funded the first Track 1.5 talks between Myanmar and the United States, which served as an informal channel for high-level participants to further relations between the two countries. These took place in Myanmar and Washington, D.C., under SAIS auspices and in collaboration with David Steinberg, a professor at Georgetown University. The two-day meeting in Washington was a sort of homecoming for one Myanmar delegate, Yuza Maw Htoon, a 2006 SAIS graduate, who founded and directs two Yangon-based sustainable-development nonprofits.

With support from the Ford Foundation, Jackson and colleagues Roger Leeds and Francis Fukuyama traveled to Myanmar in August to conduct two Leadership Academy for Development seminars. Leeds, a senior research professor of international finance and director of the Center for International Business and Public Policy at SAIS, and Fukuyama, a SAIS Foreign Policy Institute senior fellow based at Stanford University, launched the Leadership Academy for Development to engage public officials and civil society leaders in developing countries on the critical nexus between private sector growth and poverty alleviation.

The faculty members taught a session in Yangon for 60 civil society members and a second in Nay Pyi Taw, the country's new capital, for 50 midlevel public servants from the ministries of Education, National Planning, Finance, and Health.

"We encountered a sense of hope and an earnest desire to work hard toward successful reforms," Leeds says. "Participants in our seminars remarked that even a year ago they would not have been able to partake in open discussions of government successes and failures."

In September, SAIS joined Senators Jim Webb, a Democrat of Virginia; and James Inhofe, a Republican of Oklahoma, in inviting eight Myanmar parliamentarians to Washington for a week of training sessions and events.

"Myanmar's institutional knowledge of the legislative process is limited," Jackson says. "The goal of this program was to expose the delegation to numerous aspects of the U.S. government, to make clear how nongovernment entities play an important role in it, and discuss how this applies to Myanmar's own political development."

In addition to attending seminars at SAIS' Washington campus, participants were received by members of Congress, the U.S. Chamber of Commerce, USAID, think tanks, and the Maryland General Assembly in Annapolis.

In an interview in The Irrawaddy news magazine, Ti Khun Myat, head of the delegation and chairman of the Lower House's Bill Committee, said of the experience, "We will let every parliamentarian know how the world is changing and how we can reform and change our country." Under the Ford Foundation grant, SAIS will hold two additional training seminars in Washington later this academic year, one for financial leaders and another for educators. 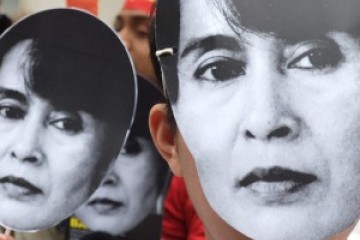 Published Feb 7, 2013
SAIS alum asks: How did the former 'Outpost of Tyranny' turn into a fledgling democracy practically overnight? / Forbes.com