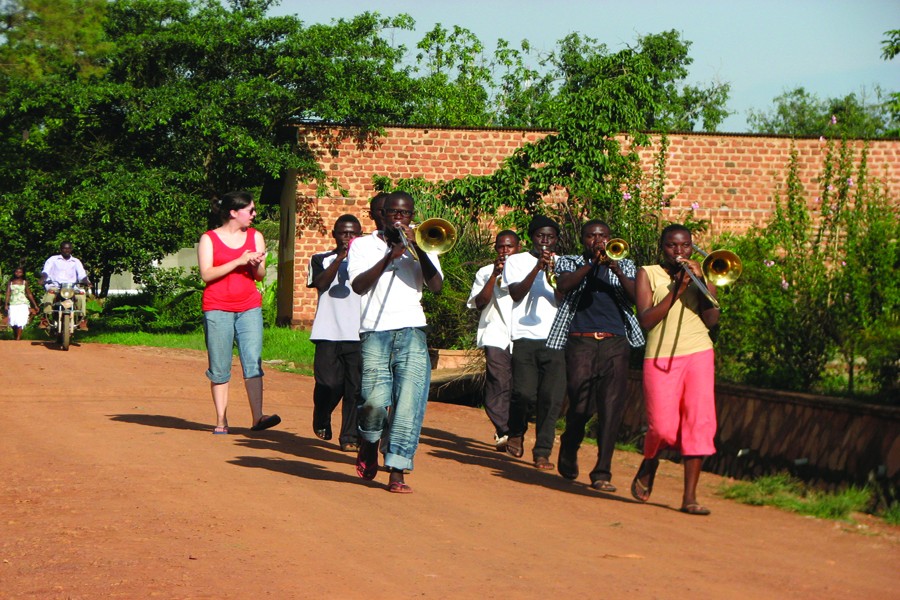 Image caption: Liz Fryer, left, is one of three Peabody students recruited to work this winter with the Toru Stars, a brass band in rural Uganda.

The young music students need to work on their ensemble skills. They're good musicians, but as a brass band they need to become better at listening—to themselves and their band mates. You can hear the difference between people playing together and a band.

Their teachers—French horn player Liz Fryer, trumpeter Emily Korth, and trombonist Frankie Yu, all Peabody undergraduates—lead them through a listening exercise. They divide the students into three groups to play repetitions of a scale. The first group begins playing the scale in unison. When it reaches the third note, the second starts playing. On that group's third note, the final players begin.

"So you have these chords going on, and you have to listen," Yu says later of the exercise. "And by the end of the second week, we had noticed a huge difference in their playing."

This scene isn't that unusual: music students sharing their expertise. The setting, however, is. Fryer, Korth, and Yu are members of the Eastern Edge Brass Quintet, a professional brass ensemble started by Peabody students in 2010. They were recruited by Amy Klosterman, founding director of the Uganda-Baltimore Alliance, known as TUBA, which has brought instruments and music instruction to the Toru Stars brass band in rural Uganda since 2008. During her summer 2011 trip to Uganda, Klosterman, a Peabody alum, was accompanied by Peabody faculty cellist Alison Wells and Wells' daughter, Olivia Sharkey. Wells is now TUBA's board chair, and she and Klosterman partnered to find a way to provide Peabody students with an opportunity to work with the Toru Stars.

From Dec. 16, 2012, through Jan. 8, 2013, the first contingent of Peabody students accompanied Klosterman to Uganda to work with about 25 Stars musicians, ages 12 to mid-20s. They worked on music theory, breathing exercises, and technique in outdoor classrooms in the villages of Kikajjo and Masanafu, outside Kampala.

The goal was to improve the overall sound of the Stars, a working brass band. "Everything we were trying to cram into these three weeks was to achieve a higher level of playing for when they go out and do these functions and be more sought after," Yu says.

Jeffrey Sharkey, director of the Peabody Institute, calls the TUBA trip "a life-changing experience for the students."

"They go to a culture where arts are not taken for granted, where arts can literally be a life-changer, and there's a hunger for what they have to offer," he says. "They see firsthand something I'm always talking about: the transformative power of music."

When they first met the Ugandan musicians, the Eastern Edge trio played a few brass band recordings, ones they listen to "to get pumped up," Fryer says. "And I remember a very small thought that they would get discouraged somehow, that these groups are so great, how can we ever get there? I feel [that] a lot. But they completely turned it around: How can we do this? How can you help me get there? It made us work harder because they wanted so much."

Klosterman heard the results of the Peabody students' hard work. "They made such a difference, even with just three weeks," she says. "[The Toru Stars are] playing better both individually and as a group, and they have a much more solid footing with their music theory. And I think what also is important is that the band came away with some valuable lessons about how to work diplomatically together. That's a challenge for any musical ensemble, and Liz, Frankie, and Emily were able to share their own experiences in that area, and it helped them tremendously."

Fryer, Korth, and Yu heard the difference, too. A few days before they returned, they heard the Toru Stars play a gig at an orphanage in Entebbe. Fryer says that the band is used to playing as loud as it can, but they advised the players to adjust for their audience. "One of the things we had talked about was that these were little kids; you need to be a little bit softer," she says. "And they didn't play loudly, and you could see them, every once in a while, turning to each other and saying, 'Quiet down.' Just the fact that they were thinking about it—I remember getting a little teary-eyed about how much they improved."