Brad Leithauser explores the intersection of poetry and prose 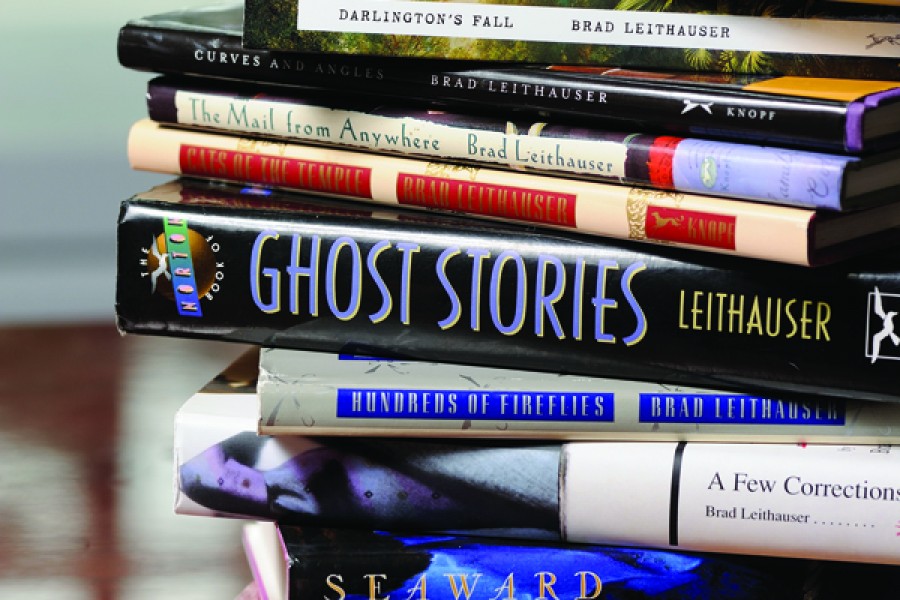 Image caption: Leithausers works include five books of poetry, six novels, one novel in verse, two books of light verse, and one book of essays. Doing different projects comes close to guaranteeing the notion that on any given day, theres something you can bear to work on, he says. And something in fact, on a good day, that you eagerly want to pursue.

When Brad Leithauser, now a professor in the Writing Seminars, came across an article about Iceland in 1984—years before the country's emergence in the late 1990s as a hip tourist spot—he knew he had to go. It was a tongue-in-cheek travel piece pointing out everything that made the country sound like the most undesirable place on earth—odd, inhospitable terrain, bad food, even worse weather. "I cut the article out of the newspaper, circled everything that made it sound like hell on earth, and mailed it to my best friend, who was living in Japan," Leithauser recalls. "And at the bottom I wrote, 'Do you want to go?' and he wrote back, 'Can't miss.'"

Leithauser says he fell so in love with the place—the landscape, the culture, the people, Nordic literature—that he essentially became a one-man public relations team, writing about Iceland "for any magazine that would let me write about it." He even moved there with his family and spent a year teaching as a Fulbright lecturer. In 2005, he was inducted into the Order of the Falcon, the highest recognition of the Icelandic state, for his contributions in writing about Nordic literature.

In addition to having been knighted in Iceland, he holds a JD from Harvard Law, studied entomology for a novel about a turn-of-the-century naturalist (in his author's note, he wrote, "If the people are fabricated, I'd like to think the insects are genuine"), and has accompanied researchers on several dinosaur digs (he hopes one day to write a novel about a paleontologist), among other pursuits. Along with the places that have inspired him—including Iceland, Japan, and his native Northern Michigan—Leithauser's wide variety of interests are represented in a collection of new and selected poems, The Oldest Word for Dawn, out this month from Knopf.

There was no systematic way of evaluating the poems he chose to include in the new collection, he says, though he tended toward poems with more narrative content. One such poem, "1944: Purple Heart," tells the story of a young woman boarding a crowded streetcar with her sweetheart, a wounded World War II soldier:

offers up a seat, which, thank you very much,

our soldier accepts--on my behalf. I nearly died.

Sit in it? I wanted to crawl under it and not come up, I was so mortified.

I'm eighteen, and healthy--how can I sit

and leave the soldier swaying on his crutch?

It's inspired by a favorite family anecdote—the young woman in the story is Leithauser's mother; the wounded soldier, his father. "I always like when I fold something I've long been fond of into a creative project," Leithauser says. He revisited the anecdote years later in prose, re-imagined for the opening pages of his 2009 novel, The Art Student's War.

Leithauser is particularly interested in the intersection of poetry and prose, as demonstrated not only in his books of poetry and novels but in his essays and criticism for publications such as The New York Times and The New Yorker's books blog. His 2002 novel, Darlington's Fall, the book he says he is happiest to have written, is a novel in verse. "If you're ever talking to a literary agent and you want the conversation to end very quickly, say, 'I'm working on a novel in verse,' " Leithauser says.

"But I actually loved doing it," he continues. "I loved the feeling that I was trying to pack into a poem all the daily details of a novel, and pack into a novel some of the lyricism and musical density of poetry."

The ease with which he transitions from the worlds of poetry and prose make him well suited to reaching out to those who may be a little poetry-shy. Iceland's erstwhile one-man PR team is out to change hearts and minds—and his enthusiasm is convincing. "As a writer, as a critic too, I write a lot about poetry, and I'm always trying, almost evangelically, to reach people who don't normally read poetry. I really do want to reach across," he says. "I'd like to think I'm a reasonably good ambassador across the doors of both poetry and prose, from one to the other."