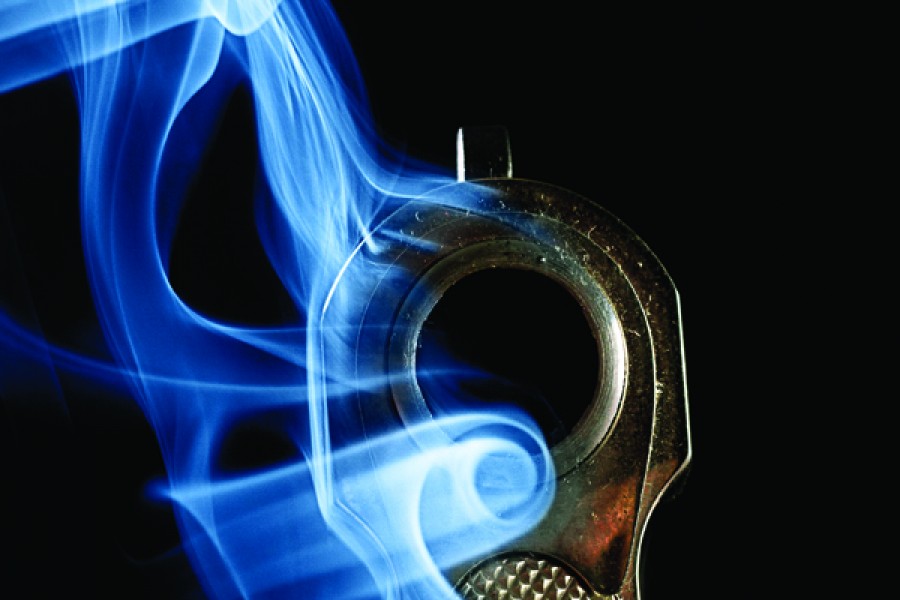 On Dec. 14, 20 first-grade children and six adults lost their lives at the hands of a troubled individual outfitted with a military-style assault rifle. Without pause, guns and gun laws entered the public conversation.

In the wake of the Sandy Hook Elementary School massacre in Newtown, Conn., Johns Hopkins President Ronald J. Daniels contacted Daniel Webster at the Bloomberg School of Public Health's Center for Gun Policy and Research. Johns Hopkins, the president felt, had something to say.

Out of tragedy, a seminal moment in time had arrived.

With the full support of President Daniels and Bloomberg School Dean Michael Klag, faculty at the Center for Gun Policy and Research immediately set out to organize a gun policy summit that would gather in Baltimore more than 20 of the leading global experts to present the latest research and thinking on gun violence in the United States, and to develop consensus recommendations to help inform policy.

To get out in front of the conversation, the organizers gave themselves a three-week deadline. And realizing the need for more than just talk, they elected to put together a book—to be published within two weeks of the summit by the Johns Hopkins University Press—that would compile all the findings and views presented at the conference. With the assistance of other colleagues at the Bloomberg School, a public opinion poll was crafted over the end-of-year holidays to ascertain Americans' views on 33 specific proposed gun policies aimed at reducing gun violence.

By many measures, the summit and associated efforts were a resounding success.

The event's two keynote speakers, New York City Mayor Michael Bloomberg and Maryland Gov. Martin O'Malley, both used the occasion to announce significant gun reform proposals. The summit received comprehensive media coverage in local, national, and international markets. The hashtag #jhugunpolicy trended internationally on Twitter for days. According to staff at the JHU Press, pre-orders of the book Reducing Gun Violence in America: Informing Policy with Evidence and Analysis have been "unusually high" for such a publication. A copy will be sent to every member of Congress.

A day after the summit, President Barack Obama announced sweeping gun control measures that mirrored many of the recommendations put forth by the JHU gun summit participants [see below].

For those at the Center for Gun Policy and Research, there was little time for back-patting and handshakes, however. Pro-gun lobbyists responded quickly and promised a fight. Some GOP members balked at President Obama's proposals, claiming them an attack on the constitutional right to bear arms. "Nothing the president is proposing would have stopped the massacre at Sandy Hook," said a statement by Sen. Marco Rubio, R-Fla. "President Obama is targeting the Second Amendment rights of law-abiding citizens instead of seriously addressing the real underlying causes of such violence."

The audience had barely filed out of the Bloomberg School's Sommer Hall, the site of the summit, than Teret was on the phone with reporters and policymakers.

"I am busier than I've ever been in my professional life," Teret said days after the summit. "Not a day passes that people involved with gun policy are not getting in touch with me. It's both invigorating and exhausting. Since the shooting in Connecticut, we've all been working harder than I ever remember. This is our time."

Webster, Teret, and colleagues know what they're up against: an uphill battle to re-envision the nation's policies on guns. They've been here before.

However, public opinion on gun control appears to be shifting in recent weeks. The findings of the Bloomberg School's opinion poll on specific gun-control policies (published Jan. 28 in the New England Journal of Medicine)—such as universal background checks and a ban on magazines over 10 rounds—identified clear support for the majority of the proposals, with 20 policies strongly supported regardless of respondents' political affiliation and whether they own a gun.

Teret says that he and his colleagues are more optimistic than ever that comprehensive gun reform legislation can get passed. And they are willing to do whatever is asked to make it a reality.

The Johns Hopkins Center for Gun Policy and Research, founded in 1995 by Teret, is dedicated to reducing gun-related injuries and deaths through the application of strong research methods and public health principles. Its faculty have pioneered innovative strategies for reducing gun violence, and have achieved a national reputation for high-quality, policy-relevant research.

The center's faculty examine the public health effects of guns in society and serve as an objective resource for policymakers, the media, advocacy groups, and the general public.

A week before the summit, Webster and Teret met with Attorney General Eric Holder, who was acting as a member of the federal task force on gun violence, led by Vice President Joe Biden. The two were asked to give their expert opinions on personalized and childproof guns, weapons that could, for example, require the handprint of the owner to operate.

Since the summit, Center for Gun Policy and Research faculty have met in person or talked over the phone with other White House officials, Consumer Product Safety Commission staff, senators, congressmen, and governors.

"The general idea is that they have a policy that they need to fine-tune. They want to know if a certain policy is going to work based upon what we know," says Teret.

For example, one question often asked is, What should be considered when addressing gun ownership policy related to those with mental health and drug addiction issues? Teret says it's a fine line of weighing all the factors and trying to make everyone safer but not intruding on the privacy rights of people with mental health issues.

While the gun summit was successful, the event also placed JHU faculty directly into the debate—and the sometimes-ugly fray played out online. Some critics took to Twitter to debunk the research put forth by the summit participants, questioning the validity of the findings and downplaying the impact of stricter gun controls on citizens' safety.

Teret says he tries not to take it personally.

"It comes with the territory," he says. "People disagree. I've had death threats before. Some will just never be convinced there should be any new national policy about gun control."

Still, Teret says he's heartened by recent polls that show there are enough people who want something done to reduce the threat of gun violence.

"We can make some progress here. What matters will be the will of the people and politicians," he says.

Vernick says that in the coming weeks and months, JHU gun policy experts might be asked to testify before members of Congress to provide research and relevant information.

"We want to take the latest findings and put [them] in the hands of policymakers," he says. "In the case of violence prevention, we want to present the best available science."

Like his colleague Teret, Vernick admits that some of the items suggested by President Obama and others could be a tough sell, specifically pointing out the ban on military-style assault weapons.

"I think anytime you try to ban an entire category of firearms, that can be difficult. But we've found that a majority of gun owners are in favor of reasonable regulation on the future sale of assault weapons," he says. "I see reason for optimism. We hope to find common ground between gun owners and non–gun owners."

The gun summit, Webster says, was not the end game but a great start to real change.

He says that on the morning of the summit's opening day, he felt an eerie calm and confidence, realizing that everything was in place as it should be.

"I was just so excited. This is an opportunity that our researchers dream of. That you get to invite your closest colleagues, who you think are at the top of the game in your field, to come and talk about a critically important problem that the nation is facing right now and cares about," he says. "So many people made a great effort into making this happen for a reason, not just for an academic exercise but to actually use research to inform policy that hopefully will affect lives and save lives."

Now, he says, it's time to spread the facts.