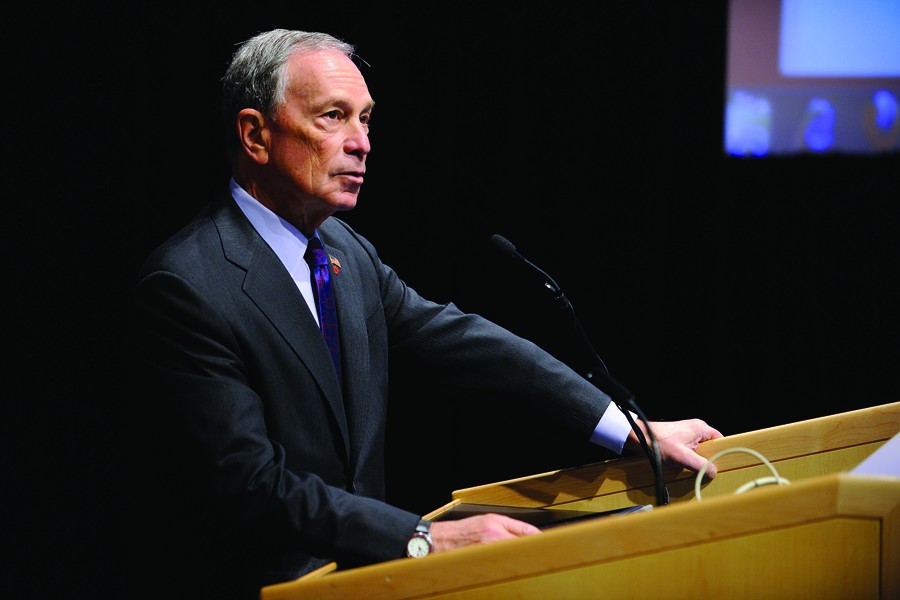 Philanthropist and New York City Mayor Michael R. Bloomberg has committed $350 million to the Johns Hopkins University, anchoring a major initiative aimed at bringing sweeping innovation to the educational approach at Johns Hopkins that will, in turn, serve as a model for U.S. higher education. The total commitment—the largest ever to the university—lifts Bloomberg's lifetime giving to Johns Hopkins beyond $1 billion.

The majority of the new gift, $250 million (out of $350 million), will be part of a larger effort to raise $1 billion to facilitate cross-disciplinary work across the university to galvanize people, resources, research, and educational opportunities around a set of complex global challenges. Initially, the funds will be used to support the appointment of faculty in the areas of water resource sustainability, individualized health care delivery, global health, the science of learning, and urban revitalization. The remaining $100 million will be dedicated to need-based financial aid for undergraduate students, ensuring that the most-talented and most-driven students are admitted to the university's classrooms, regardless of economic circumstance. Over the next 10 years, 2,600 Bloomberg Scholarships will be awarded.

This transformational gift enhances Johns Hopkins' flexible and multidisciplinary approach to solving fundamental societal problems. It will bring together scientists and scholars from numerous disciplines—ranging from politics and policy to health care delivery to basic curiosity-driven research—to support more meaningful collaboration. The goal, simply put, is to make it as easy for faculty, staff, and students to work across disciplines as within them.

"Michael Bloomberg is a visionary philanthropist, a force for social good on the order of Andrew Carnegie, John D. Rockefeller, Leland Stanford, and our own founder, Johns Hopkins," says Ronald J. Daniels, president of Johns Hopkins.

"This latest initiative allows us to greatly accelerate our investment in talented people and bring them together in a highly creative and dynamic atmosphere," Daniels says. "It illustrates Mike's passion for fixing big problems quickly and efficiently. It will ensure not only that Johns Hopkins helps to solve humanity's problems but also that it leads the world's universities in showing how it should be done."

"Johns Hopkins University has been an important part of my life since I first set foot on campus almost five decades ago," Bloomberg says. "Each dollar I have given has been well-spent improving the institution, and just as importantly, making its education available to students who might otherwise not be able to afford it. Giving is only meaningful if the money will make a difference in people's lives, and I know of no other institution that can make a bigger difference in lives around the world through its groundbreaking research—especially in the field of public health."

This gift will endow 50 Bloomberg Distinguished Professors whose expertise crosses traditional academic disciplines; they will anchor collaborative, cross-disciplinary research. These distinguished faculty members—each a forward-thinking leader with crosscutting research interests—will be recruited from around the world and will serve as human bridges among disciplines and schools spanning medicine and the humanities, public health and education, social science and engineering. The Bloomberg Distinguished Professors will carry their interdisciplinary and research-focused approach into their teaching, ensuring that the university's students are equipped to graduate from their classrooms into the real world to solve real problems.

Johns Hopkins was America's first research university, establishing a model emulated throughout the United States and around the world. It has also been home to groundbreaking examples of interdisciplinary partnerships in areas such as biomedical engineering, public health, space studies, and international studies. Drawing on this legacy and through this latest gift from Bloomberg, Daniels says, Johns Hopkins seeks to reconceive the traditional model and make collaboration across disciplines the convention rather than the exception.

"When the Baltimore merchant Johns Hopkins left $7 million nearly 140 years ago to create our university and hospital," Daniels says, "it incited nothing less than a revolution in American higher education. It led to the modern research university and academic medical center, brand-new institutions that recognized the power in combining knowledge creation with its teaching and its use for the good of humanity.

"Now, with Michael Bloomberg's commitment to this transformational initiative as the centerpiece of our efforts, Johns Hopkins seeks again to redefine higher education in America. We want nothing less than to accelerate the pace of change in universities and academic medicine, to create the new model for institutions intended to make the world a better place."

Applications for undergraduate admissions at the university's Homewood campus have more than doubled since 2001, and selectivity has increased from a 34 percent admittance rate to 18 percent. In the same period, the number of underrepresented minority members in the freshman class has increased from fewer than 7 percent to nearly 20 percent. The university's Bloomberg School of Public Health and School of Nursing are each top-ranked in the U.S. News & World Report "best graduate schools" rankings, and the School of Medicine is second.

Bloomberg is believed to be the first person ever to reach the $1 billion level of giving to a single U.S. university and academic medical center. With this new commitment, Bloomberg—chairman of the university's board of trustees from 1996 to 2002 and previously chair of the Johns Hopkins Initiative fundraising campaign—has now given Johns Hopkins $1.118 billion in the 49 years since he graduated. His first Johns Hopkins gift was $5 in 1965, a year after he received his bachelor's degree in engineering from the university. His support has benefited students and faculty in every school of the university, patients at the Johns Hopkins Hospital, and anyone whose life has been touched by Johns Hopkins.

Bloomberg made his first $1 million commitment to the university in 1984, 20 years after his graduation. That gift created a professorship in the humanities named in honor of his mother, Charlotte. He also honored his mother with a $120 million gift toward construction of the new Charlotte R. Bloomberg Children's Center, a 12-story, 560,000-square-foot tower at the Johns Hopkins Hospital with 205 private rooms, a 45-bed neonatal intensive care unit, a 40-bed pediatric intensive care unit, and 10 state-of-the-art surgical suites. It opened in 2012.

The mayor's generosity has had an extraordinary impact on Johns Hopkins in every way—in terms of facilities and infrastructure, research and academic achievement, student body quality and diversity. He has overseen, and in many cases funded, a quantum improvement in labs and classrooms, patient care facilities, arts and cultural centers, and campus amenities across Johns Hopkins campuses, insisting that each project emphasize the design of the environment, include public art, and encourage collaboration among students and faculty.

"There is little doubt that the modern history of Johns Hopkins has been inextricably and profoundly linked to the remarkable vision and generosity of Mike Bloomberg. We are so much better for his faith and confidence," Daniels says.

In all, the mayor has given $240 million toward capital and infrastructure projects, including the Bloomberg Center for Physics and Astronomy in 1988, implementation of the Homewood campus master plan from 1998 through 2002, massive renovations and improvements at the Peabody Institute in 2000, and a complete gutting and interior rebuilding of the landmark Gilman Hall at Homewood from 2005 to 2007.

In recent years, Bloomberg has funded 20 percent of all need-based financial aid grants for undergraduates in the university's schools of Arts and Sciences and Engineering. With the latest gift, his student aid gifts now total $219 million, of which $164 million has been for undergraduates.

An ardent believer in the power of public health discoveries and practice to impact the lives of millions of people around the globe, Bloomberg has directed $289 million to what since 2001 has been known as the Bloomberg School of Public Health. He has given $125 million since 2001 to establish and support the Malaria Research Institute within the Bloomberg School of Public Health, a multidisciplinary center that seeks to eradicate that mosquito-borne disease, which in 2010 afflicted an estimated 216 million people and killed 655,000. The institute conducts basic and applied research on mosquito biology, the malaria parasite, disease processes, and potential vaccines.

The mayor's support for Johns Hopkins research has reached $336 million, including $69 million since 2000 to establish the School of Medicine's Institute for Cell Engineering, which focuses on the application of stem cells to improve human health.