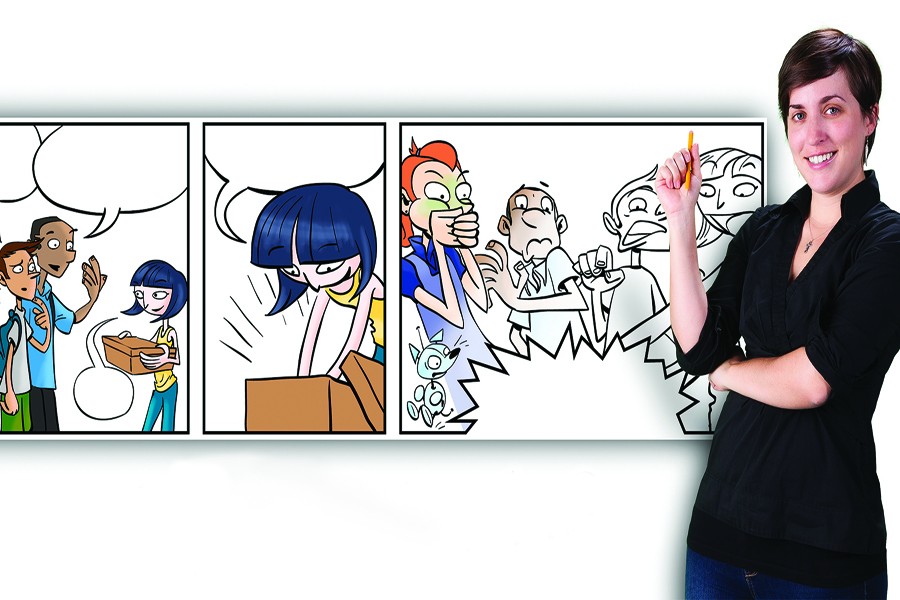 Image caption: Artist Annie Marcotte, along with her Technical Communications Group colleagues, crafted interesting characters with a passion for learning.

Don't be alarmed, but a gang of quirky teens with a passion for science, technology, engineering, and math—and a penchant for conducting creative, sometimes daring, experiments—has invaded APL.

The teens are characters in an APL comic strip called "Fifth Period" and have starring roles on the Laboratory's new STEM website, which launched in October. Designed and developed by Annie Marcotte, Anne King, and Don Vislay of the Technical Communications Group at the request of STEM program manager Dwight Carr, the comic is designed to make learning fun.

"A key reason the comic strip was developed was to encourage students to delve deeper into STEM-related topics and keep them coming back," Carr says. The website is geared toward students, parents, and teachers, and features information, tools, lessons, and activities. Each comic strip touches on a STEM topic, and a related lesson or experiment appears on the same Web page.

"When the STEM Program Office began looking for a comic strip designer, we quickly threw [our] name into the hat," says Vislay, supervisor of the Technical Communications Group's Publications, Presentations, and Exhibits section. "I knew Annie had the skill and the desire to take on a project like this, as well as a real interest in science. She is very good at pulling in all of the information around her, storing it like a sponge, and using it to make something great."

Marcotte has been drawing for fun since she can remember. Her hobby developed into a career when she attended Maryland Institute College of Art to study graphic design. "Graphic design was the majority of what I studied in school, but all students had to take a full year of fundamental art training our first year, and it was there that I really honed my skills," Marcotte says.

Using a Wacom tablet—a computerized interactive device with a stylus that emulates the way the artist would draw using a pen or pencil—Marcotte began to sketch the initial comic characters. She and King worked together to come up with character names that represented the letters in the acronym STEM—Sophie, Tom&aacute;s, Emma, and Marcus—and then collaborated to create a back story for each character, considering everything from their family background to hobbies.

Carr and Colleen D'Agrosa, also of the STEM office, helped King, Vislay, and Marcotte develop characters that all sorts of students could relate to. Sophie has a thirst for knowledge and a passion for space science; Tom&aacute;s is an "unconventional learner" and video-game lover; Emma is the classic know-it-all with the desire to build complicated (and sometimes ridiculous) contraptions; and Marcus, who often prefers the soccer field and his band to the classroom, is very sharp when it comes to numbers and equations.

"The point is to make this comic strip engaging and relatable," King says. "We wanted to get across the idea that you can be a soccer player, you can have other interests outside of school and still be involved in STEM. You can struggle sometimes or learn differently than others and still have a passion for STEM."

A key character is the gang's passionate and creative science teacher, Mr. Kepler—named after renowned German mathematician and astronomer Johannes Kepler. As a nod to the legacy of the Groovy Science shows created and performed by APL's now retired Marc Clayton, the team developed Kepler's enthusiastic character with a unique, sometimes eccentric, approach to STEM topics.

Consultants in the creative process include family members.

Vislay's teenage daughters chimed in on language, mannerisms, and expression. "The stories were intriguing enough that they captured their interest," Vislay says. "Our goal is to have kids come back again and again to see their favorite characters and explore what's new."

Marcotte's father, Frank Marcotte, works in APL's Air and Missile Defense Department and has acted as her behind-the-scenes STEM subject-matter expert. "When I have a question about whether or not some science or engineering element makes sense, I ask him," she says. "He's been a great resource for me."