Johns Hopkins basketball player makes his mark on the court, and on YouTube

Niko Kotoulas is getting noticed on the court—and on YouTube 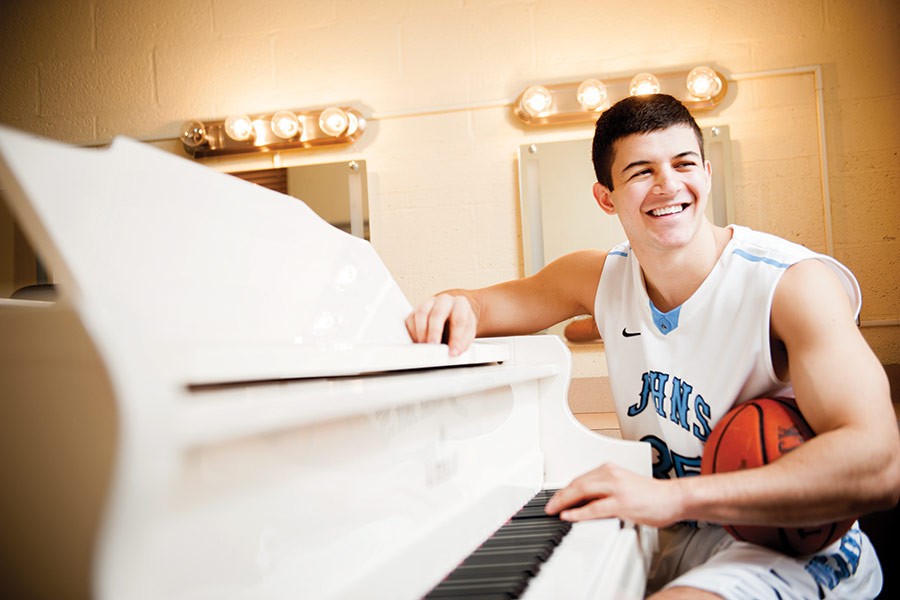 When not on the basketball court or studying, Niko Kotoulas frequently pops down to Homewood's Mattin Center to spend some quality time with his other passion, the piano.

In a small room with not-so-ideal acoustics—Kotoulas says the space can sound "tinny"—the sophomore guard unravels songs that have been stuck in his head. He deciphers the notes and chord progressions while coming up with unique arrangements of the original. After he pins down a song, the economics major often sets up a camera in one corner and then performs from memory.

A short while later, the rest of the world can watch.

A budding star on the court for the Johns Hopkins Blue Jays, Kotoulas has emerged as something of a YouTube sensation with his piano playing. He posts self-produced music videos to his account whenever the mood strikes and time allows. This past summer, he recorded a cover of Justin Timberlake's "Take Back the Night." The YouTube clip got tweeted out and all but went viral, quickly notching more than 200,000 views in a span of days.

In the video, Kotoulas—all 6 feet 6 of him dressed in shorts, a checkered shirt, and shades—strides up to a piano in his high school auditorium. Without any introduction or fanfare, he plays a slow intro that bleeds into the track's melody, stripping down Timberlake's '70s bass-and-horn-laden groove to its emotional core, with a few embellishments along the way. He ends with a one-handed flourish and a smile before exiting the camera frame without a word. The casual, no-nonsense approach to his videos—there are dozens—has become his trademark. For some he wears his basketball jersey, but mostly just shorts and a plain shirt. No talking.

His haunting version of Lana Del Ray's "Summertime Sadness" has attracted more than 140,000 views. He's also covered Swedish House Mafia, the Script, Imagine Dragons, and others. He claims he has more videos in mind, when he gets around to it.

A native of Denville, N.J., Kotoulas starting playing piano at age 4. His parents bought him a keyboard, and he soon took to playing along with songs he heard on the radio.

"That's when my parents figured, We have to give him lessons," says Kotoulas, who despite his intimidating height and muscular build comes off as smaller and more approachable.

He claims not to be classically trained, but his longtime piano teacher, Carolyn Chermak, disagrees.

"He reads beautifully, and he can perform Mozart, Chopin, Beethoven, all the greats," says Chermak, who still keeps in touch with her star pupil. "But along the way he learned to improvise and ear train. He can hear a piece of music and just play it. He's very gifted."

Kotoulas continued to take lessons and play at recitals throughout his teens, when he also got heavily involved with sports, predominantly basketball. At 16, he contemplated giving up on hoops and focusing on a professional music career.

"But I thought basketball was my best bet going forward and getting into the school I wanted," he says.

He didn't hide his musical talents, however. He performed at high school functions, nursing homes, and American Legion and Rotary Club events, and in front of Army dignitaries. He also sang in the school's chorus and played with a band.

He says he enjoys performing and never recalls getting stage fright.

"I smile at the audience when I step on stage, and they often just laugh. Then I sit down and play," he says. "I might be more thinking of my mom being in the audience than about the music. And sometimes I close my eyes for dramatic effect. People like that."

On the court, however, his eyes are wide open.

A star player in high school, Kotoulas helped take a team that hadn't had a winning record in decades to a conference title and a state semifinal appearance.

He was recruited by teams from Division III to Division I, choosing Johns Hopkins for its combination of academics and sports excellence. He also was attracted to the school's Marshal L. Salant Student Investment Team and Baltimore's significant Greek population.

"Both my parents are from Greece, and the Greek culture is very important to me," he says. "I also liked that I wasn't far from home."

Men's head basketball coach Bill Nelson says he was drawn to both Kotoulas' play and his personality.

"I first saw him at an Academic Elite basketball camp. He played well, but what struck me was that he is one of the friendliest young men I've ever met. We're not allowed to interact with the students much beyond a handshake at these times, but I could tell there was something unique about him."

Nelson says that Kotoulas' style of play is somewhat unorthodox and not heavy on finesse. He describes him as a power player able to see the big picture when he takes the ball to the basket.

Nelson says the first time he heard Kotoulas play piano was last year in Cleveland at the home of a senior player, who had invited the team over when they were in town for a tournament at Case Western Reserve University.

"It was a big, beautiful house. I remember being in the family room, and we all heard this music and stopped talking," Nelson says. "Niko had found a piano in the parlor and just starting playing this wonderful music."

Nelson says he's since seen the YouTube clips, and during the holidays last year, Kotoulas recorded a collection of Christmas songs that he put on CDs for the coaching staff.

As for his basketball ability, Kotoulas is something of a tweener, a hybrid shooting guard and small forward. He models his game somewhat after that of LeBron James, his favorite player.

"LeBron is very strong and aggressive inside and outside the paint. He's a good driver who has worked hard to improve his shooting," Kotoulas says. "I also like to attack the basket but can work on the post."

His freshman year, Kotoulas played respectable minutes early on because some upperclassmen were out with injuries. When the starters returned, he played intermittently before he got sick with strep throat. He later injured his toe during an away game and had surgery to repair the torn ligament.

With his season over, he used the time off to his advantage. He absorbed the playbook and took mental notes during games, appreciating the differences between the high school and college game.

Even with a cast and crutches, Kotoulas hit the gym to lift weights and keep in shape. He spent the rest of his spring and summer rehabbing, building back his strength, speed, and stamina.

He heard the Justin Timberlake song the day after the single was released. He says he figured out the tune in a matter of minutes. "A lot of songs follow similar rules. You get used to it and how the chord progressions will go," he says.

After the YouTube video blew up, Kotoulas says he was contacted by several publishers and agents looking to gauge his interest in signing a recording deal.

"But they were saying I had to drop out of school, and it wasn't clear where this was all headed," he says. "I just like playing. If something really big comes out of my music, great, but for now I'm focused on school and basketball, and then a career."

After school, Kotoulas plans to get into investment banking. He sees himself in New York working in sales and trading, or capital markets.

And he will continue to write music, with the plan to have some songs professionally recorded at some point. He says he has three songs copyrighted and another six to seven songs, from mellow rock to upbeat dance, in his head waiting to be recorded down at the Mattin Center.

But for now, basketball is king. Kotoulas admits he has to continue to prove himself on the court.

"I think I've shown the coaches what I can do, but I have to keep demonstrating how I can help out," he says. "I can't worry about playing time right now. I'll do what I can, if that means coming off the bench maybe as sixth man, fine. I just want to bring energy to the team."

Chermak says wherever Kotoulas' future leads him, she is sure her former piano student will be a success.

"He could be a professional musician if he wants to be, absolutely," she says. "But I told him do something to fall back on. Music can be a tough life. It's wise he's studying economics."

Maybe someday he will be counting royalties. 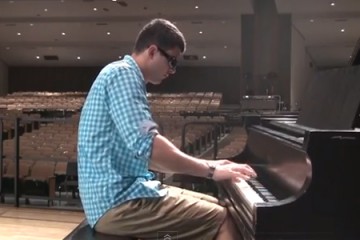 'Take back the night' - Justin Timberlake