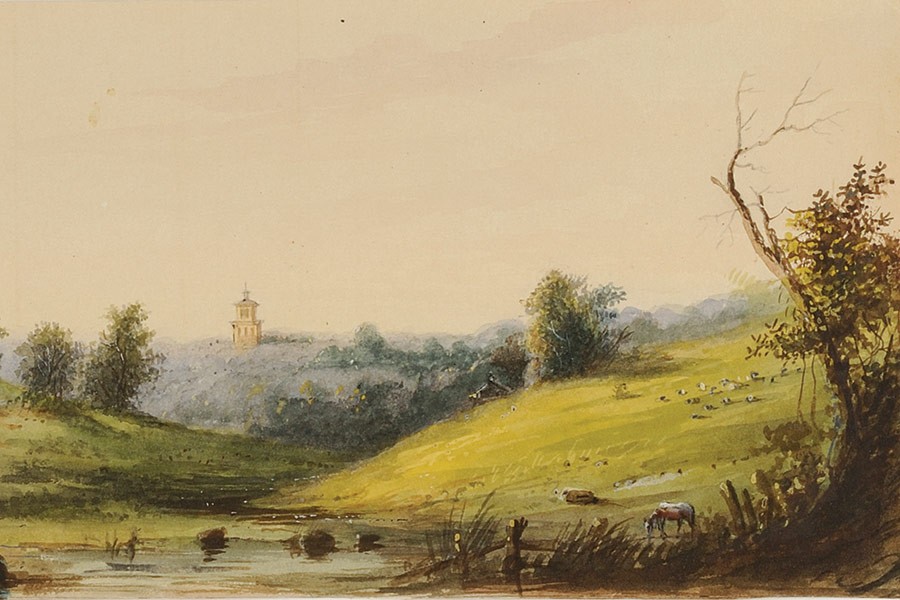 In 1837, entrepreneur and philanthropist Johns Hopkins bought a Federal-style mansion located on 300 acres in northeast Baltimore. Henry Thompson, a businessman and War of 1812 cavalry captain, had built the estate in 1803 and named it Clifton after his ancestral home in England. It became Hopkins' summer home, where he liked to entertain family and friends, until his death in 1873. It's where he welcomed the Prince of Wales, who became King Edward VII. It's where he held a clandestine meeting that included Salmon Chase, secretary of the Treasury under President Abraham Lincoln; his friend John Work Garrett, the B&O Railroad president; and other B&O officials, who offered to use the rail for Union Army troop movements. And it's where he hoped the university that would bear his name would be located.

The Homewood Museum exhibition A Tale of Two Houses: Homewood, Clifton, and Historic Preservation, which opens Dec. 10, takes a look at how the university wound up on 140 acres on Charles Street instead of off Harford Road, roughly three miles to the east. The work of the seven undergraduates in Two Houses—the product of the fall Curating Homewood class of Catherine Rogers Arthur, Homewood Museum director and curator—follows the parallel lives of Clifton and Homewood, built in 1801 by Declaration of Independence signee Charles Carroll for his son, showing how the city's growth during the 19th century influenced the decision of the university's founding trustees to locate the university in what is now Charles Village.

Each student spent the first half of the semester researching an aspect of the exhibition and writing a wall text panel to complement the objects, photographs, paintings, and maps that tell the story of Two Houses.

Emily Markert researched the late-19th-century time period, when Daniel Coit Gilman, the university's first president, and the trustees decided not to build a campus at Clifton. By 1876, she says in an early November class, Gilman and the trustees "had this idea of the university being men not buildings, so even though they had planned to move the university to Clifton, they bought several buildings downtown to serve as a temporary campus." She stands in Homewood's east central hallway next to a printout of her wall text, practicing how she might greet visitors during the exhibition's Dec. 9 opening reception. She explains that when the university decided in 1882 to build science labs downtown, some trustees debated the long-term impact of building modern research facilities at an ostensibly "temporary" location. "And 1894 is when B&O stock collapsed and [the university] lost a lot of money," she continues. "So the vision of moving the campus up [to Clifton], renovating the mansion as well as adding new buildings, seemed ever more far off than before."

"I really like this exhibit, I have to say," Arthur comments after Markert finishes talking.

Before Markert, Rachel Judah introduced the two houses and the exhibition's themes, and Sydney Coates provided overviews of the original owners. Eve Rosekind discussed historic preservation and what Baltimore looked like in the early 19th century. Nissa Cheng talked about the history of Homewood. Kirsten Gausch covered the history of Clifton. Frances Loeb talked about Hopkins' will (a few pages will be exhibited in Two Houses) that founded the university and hospital. All of which set up Markert's exploring how Baltimore changed over the century and what influenced the decisions to build at Homewood.

"As it moves along and you learn more, it becomes even more engaging and interesting," Arthur continues, complimenting them.

Arthur has taught a version of this course, cross-listed in the Department of History and the Museums and Society Program, every fall since 2006, using the Homewood Museum and its collections as a window into thinking about life in the 19th century. And her students have produced compelling considerations of ordinary life (among them, Feathers, Fins, and Fur: The Pet in Early Maryland in 2007 and Federal Foodies: From Farm to Table in Early Baltimore in 2011). What's so fun about these exhibitions is seeing how certain aspects of everyday life have and haven't changed. Two Houses shows that while the university didn't end up where Hopkins envisioned it, it has stayed true to his commitment to education, family, and philanthropy. After Markert's talk, Loeb speaks about the way the 2010 Gilman renovation recycled building materials in the same way Hopkins' renovation of Clifton recycled Thompson's materials, and about the university's contemporary philanthropic endeavors, which leads her to talking about the Baltimore Scholars Program, when one of her classmates speaks up.

"Frances, you know what just occurred to me?" she says. "You could talk about the people who went to Clifton [now home to the nonprofit CivicWorks] for the President's Day of Service, [how] for our Hopkins service we went to help at his home."