We woke and, shy and proud, read our new poems aloud. 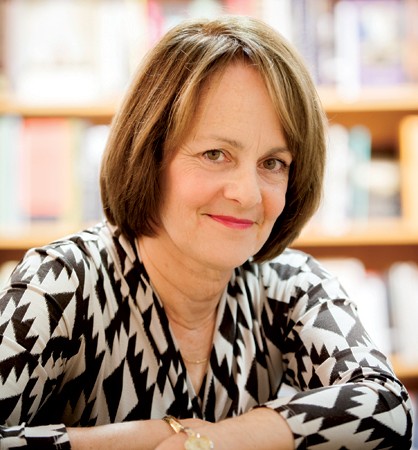 From "Bed of Letters" by Mary Jo Salter

Nothing is more important to a poet than voice: the one that sails out from the soul, through a pen, onto the page and into the ears—and heart—of another.

Full circle, a nonstop voyage from soul to soul.

"Truly fine poetry must be read aloud," said the great Argentine writer Jorge Luis Borges (1899–1986.) "A poem demands pronunciation … it remembers that it was first song."

The songs of poet Mary Jo Salter—clear and elegant, grounded in history—have been broadcast across the nation more than a dozen times in the intimate baritone of Garrison Keillor on NPR's The Writer's Almanac.

On July 1, 1998, Keillor—a champion of letters, one who "has done so much for poetry and us poets," says Salter—read aloud her poem "Lament," which goes, in part:

**Waking in her crib, the boat

they pushed her off in long ago,

although she stood to shake the rail

and wail at them,

"Lament" is from the 1994 Salter collection Sunday Skaters.

Earlier this year, the much-lauded Krieger-Eisen­hower Professor in JHU's Writing Seminars released her seventh book—Nothing by Design (Knopf), a collection of 36 poems.

Salter read from the new work at the Ivy Bookshop in Baltimore in November and was interviewed about the new collection on the online PBS NewsHour, which called it "a mixture of darkness and whimsy."

In the interview, Salter described herself as a "particularly formal poet," an approach tinted with English literary history and practiced at Harvard (BA, 1976), where she studied with Pulitzer Prize winner Elizabeth Bishop, one of the most important poets of the last century.

"I do think there can be something redemptive about sound in poetry," said Salter to NewsHour senior broadcast producer Mike Melia. "If we hear, not necessarily a regular repetition of rhythm or rhyme, but if we hear certain sounds that chime for us, they provide a subliminal consolation even if the subject can be quite dark."

The chimes peal louder in a side project—song writing, Tin Pan Alley meets Yeats—that Salter has worked on off and on over the years with her friend Fred Hersch, the genre-defying jazz pianist and composer nominated five times for a Grammy.

"I've tried my hand for a number of years on song lyrics," said Salter in an email interview with the Gazette during her recent sabbatical. "I find writing lyrics—where you have to be even more simple and direct than in a poem—to be a great challenge."

In 2007, Salter earned the thrill of seeing some of the collaborations played at Lincoln Center with Hersch at the piano in a song cycle titled Rooms of Light.

In discussing the performance, New York Times critic Stephen Holden said of Hersch's art, "Invention and lyrical fancy are tethered to an analytical mind that bows" to structure and formal balance.

"Chaos," wrote Holden, "is not allowed."

The same can be said of Salter, Grand Rapids, Mich.–born and Baltimore-reared, who recently returned with Hersch to the project.

"We hope to have a fuller version of Rooms of Light ready later this year," said Salter, who co-edited the 1996 edition of the Norton Anthology of Poetry.

Formal, yes. Her new book opens with an illustration from "The Grave," a poem by the 18th-century Scotsman Robert Blair, and contains a page of "urban haiku" and one of "French haiku."

But Salter—whose love of music took shape in a poem titled "John Lennon" in the wake of the beloved Beatle's violent death—is also funny.

In "Instrumental Riddles," she writes of the drum:

**Nothing to shake a stick at,

hollow inside, I'm anything but shallow.

The deeper I am, the louder

silence is struck a blow.**