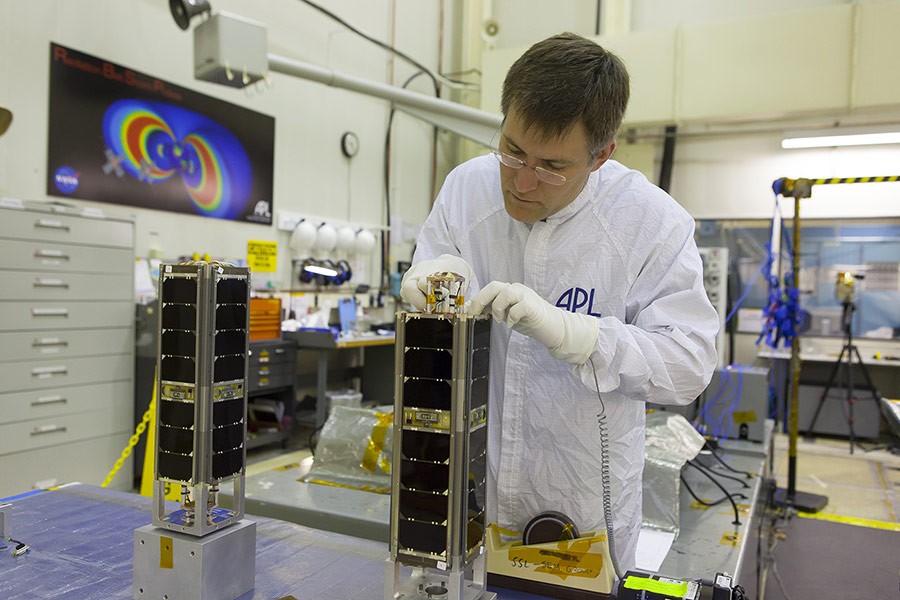 The cubesats were among 29 satellites lifted to orbit aboard a Minotaur I rocket from Wallops Flight Facility, Va., at 8:15 p.m. Nov. 19, as part of the U.S. Air Force ORS-3 mission. APL mission operators confirmed radio contact with the two satellites just before 10 p.m.

The shoebox-sized satellites, part of APL's Multimission Bus Demonstration, represent a new capability for the military, intelligence, and science communities: a small satellite that can get to space inexpensively and be tough enough for long-term use.

"The Multimission Bus Demonstration could revolutionize the field of small satellites and their potential uses," says Joe Suter, APL's mission area executive for National Security Space. "There are applications for [Department of Defense] agencies that want quick access to space, with durable satellites you can launch for a fraction of what it costs to launch larger spacecraft. MBD can be a very significant contribution to those missions."

Because they cost relatively little to build, launch, and operate, small satellites (commonly known as cubesats or microsats) are especially popular among university researchers looking to study the space just above Earth. But the spacecraft being used today are effectively science projects, not dependable or durable enough for military or intelligence community use.

The APL cubesat tackles this challenge, drawing from five decades of APL experience in building rugged spacecraft for harsh environments near and far from Earth, and from the Lab's deep, unique understanding of spacecraft, aerospace engineering, and applied engineering techniques. The satellites have all the subsystems of a standard orbiter—command and data handling, communications, navigation, power, and payload—scaled to fit into an approximately 13-by-4-by-4-inch package that weighs less than 11 pounds.

The satellites also have other touches of APL ingenuity and resourcefulness. For example, engineers had to invent solar-panel release mechanisms that didn't include pyrotechnics, since microsats—as secondary or "piggyback" payloads on other launches—aren't permitted to carry explosives.

Once the satellite is deployed, the solar panels have three jobs. Besides supplying power, they act as reflectors for the satellite's antennas, and the magnetic field produced from the internal torque coils is used to align the spacecraft. "We are leveraging decades of APL space systems experience to make these spacecraft more reliable than typical cubesats," says APL's Philip Huang, the MBD technical lead.

A critical feature is that the satellite can be customized to fit mission needs, and instrument builders can add any payload that fits within the spacecraft's size, power, and interface specifications.