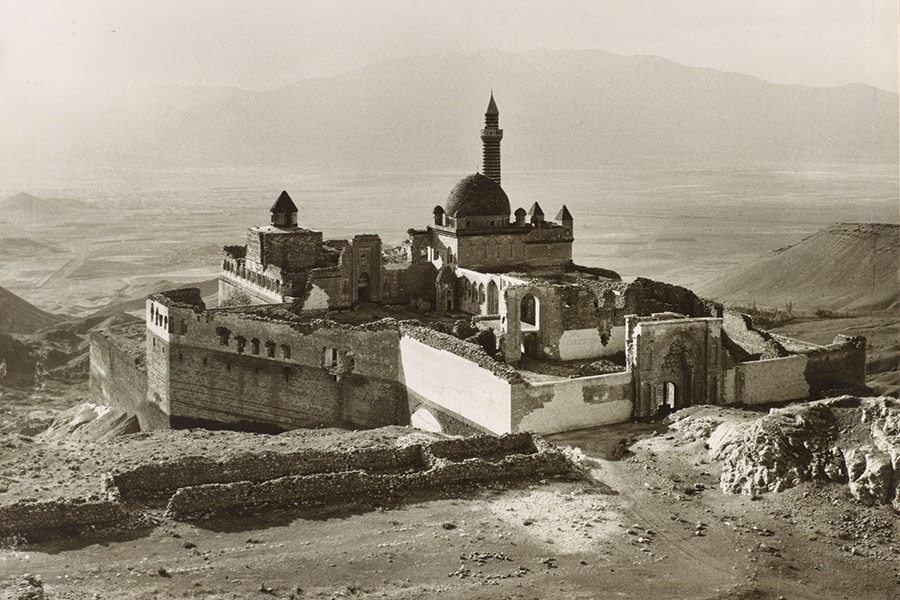 Image caption: At the Freer/Sackler galleries, rising sophomore Grace Golden is working on an exhibition of photographs by Ara Güler. This piece by the Turkish photographer shows the Ishak Pasha Fortress, which contains the ruins of a palace built toward the end of the 17th century.

Drew Lash is spending her summer with Henri de Toulouse-Lautrec. A Class of 2014 double major in international studies and art history with a minor in the Program in Museums and Society, she is one of two Johns Hopkins undergraduates interning at the Phillips Collection in Washington, D.C., and part of her work is researching the 19th-century French postimpressionist.

It's an opportunity to get professional experience in how a museum operates on a day-to-day basis. "The curators are really good at making sure that they're teaching us, not just having us do busy work," Lash says, adding that she feels part of the museum's curatorial process. "It's a little more hands-on than some other internships that I've had."

Meeting a minimalist living legend was kind of nice, too. "I actually got to meet Ellsworth Kelly, which was probably the highlight of the summer," she says with a laugh. She's been researching some of his prints as well, and she met him when he came by the museum.

This summer, students in the Program in Museums and Society are also interning at Christie's and the Gagosian Gallery in New York, the Smithsonian's Freer Gallery of Art and Arthur M. Sackler Gallery in Washington, and the Jewish Museum of Maryland and the Walters Art Museum in Baltimore.

Grace Golden, a Class of 2016 anthropology and Middle Eastern studies major minoring in the program, is interning at the Freer/Sackler galleries, a continuation of the spring 2013 class Photographs on the Edge, about Turkish photographer Ara Güler, that will turn into an exhibition opening at the galleries in December. "In the class we came up with a preliminary exhibit proposal," Golden says. "My internship is an extension of that project, and so I'm revising what the class has done and researching everything that needs to be done to bring [the exhibition] toward completion."

The internships provide a great learning experience for the students, but the museums benefit as well. "Museums often struggle with this young adult audience," says Elizabeth Rodini, director of the Program in Museums and Society since she founded it in 2006. "And our students are those [young adult] voices, so they can almost become a test group, and [museums] appreciate the fresh insights that young people bring to their collections."

Since its launch, the program has provided students with the opportunity to collaborate with a number of community institutions, from putting together 2008's Mapping the Cosmos: Images From the Hubble Space Telescope at the Walters Art Museum to working with Rena Hoisington, the Baltimore Museum of Art's associate curator of prints, drawings, and photographs, to curate the 2011 exhibition Print by Print: Series From Dürer to Lichtenstein, a collaboration funded by a grant the program received from the Andrew W. Mellon Foundation in 2011.

In April, Museums and Society received its second Mellon grant, a $500,000 award that it wants to use to broaden its community collaborations. "One thing we hope to do in the second round of Mellon granting is involve new partners in new areas that we haven't worked in as extensively, including the sciences—both biological sciences and materials sciences," Rodini says. "Museums, if you define them broadly, are places where knowledge is synthesized and presented to a public, and the sciences can benefit from that sort of outreach as much as the arts and humanities can."

These partnerships provide students with opportunities to do serious research that leads to public projects. Yonah Rebeck, a Class of 2015 history major, is interning under Jewish Museum of Maryland curator Karen Falk, doing the preliminary research for an exhibition scheduled to open in winter 2014 about Mendes I. Cohen, a Baltimorean who fought in the War of 1812 and then traveled through Europe and the Middle East. "What really distinguishes [Cohen] is he is just a relatively average American citizen; obviously he could afford to travel, but heís sort of the first American citizen traveling around representing America," Rebeck says. "And he was really proud of it. One of the most emblematic things he did was he made his own American flag and traveled down the Nile with it."

Joseph Shaikewitz, also an intern at the Phillips Collection, is putting together a show. He's selecting pieces from the portrait collection of Joseph Lichtenberg, a psychoanalyst and Johns Hopkins alum. "I went to his house and looked at his works and saw how those could fit into an exhibition that weíre going to put up here in the fall," he says. "So that's doing everything from choosing the works to the layout, and now I'm working on the text."

It's the second exhibition Shaikewitz has put together as an undergradﬂhe co-curated Stranger Self as an intern at Baltimore's Gallery CA—and he's spending next year studying abroad at the &Eacute;cole du Louvre in Paris, where he's looking forward to showing off local galleries to Rodini's 2014 Intersession course in that city. Curating is what he wants to pursue, and the Museums and Society Program is giving him the chance to learn firsthand what that career is like. "It's the best part of my Hopkins experience," he says of the program. "It's so interdisciplinary and hands-on at the undergrad level. It's unbelievable that we get the opportunities that we have. We're definitely not doing typical intern work. We're having real, legitimate opportunities."

The internships of Lash and Shaikewitz are funded, respectively, by the Paul and Natalie Abrams Internship and the Robert and Nancy Hall Grant for Museum Internships. Golden's and Rebeck's are funded by the Andrew W. Mellon Foundation.