Growing up in a small town in Oklahoma, Holland Ford would often gaze into the night sky and admire the stars for their glittering light. That town with few streetlights of its own and no library to speak of was able to illuminate more than the night for young Holland: It lit his imagination. 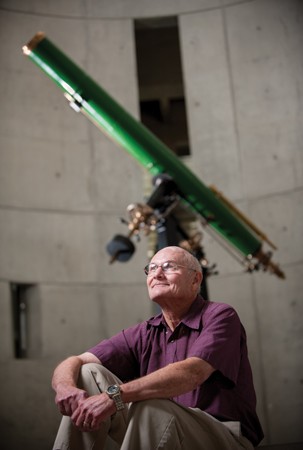 He pulled cotton as a child and saved enough money to buy his first telescope as a preteen, and now, decades later, he is being recognized for his work on another telescope, one of historic importance.

Ford has received NASA's Distinguished Public Service Medal for his outstanding contributions to the Hubble Space Telescope. The medal is the space agency's highest form of recognition, awarded to someone who has made a profound impact on the success of a NASA mission.

"Hubble is the result of so many people's efforts," says Ford, a research professor in Johns Hopkins' Krieger School of Arts and Sciences and a former astronomer at the Space Telescope Science Institute. "It's almost unfair to single out a particular person for his role. Thousands of people helped make Hubble a success."

Ford's involvement in the Hubble mission began years before the telescope launched in 1990; he was a co-investigator on the Faint Object Spectrograph, one of Hubble's first-generation instruments.

When scientists discovered the telescope's flawed primary mirror shortly after its deployment in 1990 in Earth orbit, Ford assumed a lead role in organizing a panel to develop a solution for improving the telescope's performance.

The flaw in Hubble's mirror was for months a major news story and the punch line of jokes for late-night comedians.

"It was embarrassing to NASA and to astronomers," Holland says. "How could this have happened? everyone asked. Well, we knew how it happened."

The mirror's flaw was determined to be an optics and engineering problem. The panel recommended the development of the Corrective Optics Space Telescope Axial Replacement to sharpen Hubble's blurred vision, and Ford went on to be the COSTAR program scientist during its construction.

NASA officials, he says, wanted the mirror's repair to be fast-tracked before another problem came along and made the Hubble a lesser priority. Four years earlier, NASA had experienced a devastating blow when the Space Shuttle Challenger exploded during liftoff, and the two incidents were eroding the public's faith in the agency and the value of its programs.

Installed in 1993 during the first servicing mission to the telescope, COSTAR returned Hubble's vision to its pre-launch expectations, ensuring that the telescope would meet its primary science goals. It wasn't just the telescope's mirror that was repaired; the reputations of NASA and Hubble were redeemed as well.

"The space program would have survived," Ford says, "but NASA would have lost the confidence of Congress if we hadn't been able to repair Hubble."

Ford later was part of a team that went on to develop the Advanced Camera for Surveys, which significantly increased Hubble's survey capability. The ACS made one of the longest and deepest visible-light images of the universe, called the Hubble Ultra Deep Field. The camera also played an important role in understanding dark energy, which is causing the universeís expansion to accelerate, and it captured the first visible-light view of an extrasolar planet.

The ACS science team published more than 100 papers with more than 7,000 citations on topics ranging from planet-forming debris disks around nearby stars to galaxies forming during the first billion years of the universe.

In addition to developing Hubble instruments, Ford and his Faint Object Spectrograph colleagues made important discoveries with the telescope. Ford's Hubble observations helped provide the first evidence for the existence of supermassive black holes in the cores of most galaxies. Using the FOS, Ford and the team identified the presence of a 3-billion-solar-mass black hole in the active galaxy M87.

"We all thought Hubble would revolutionize our understanding and view of the universe, but we had no idea to what extent that would be," Ford says. "We really underimagined what we would discover. It has rewritten the textbooks in field after field of astronomy. Hubble will be in the history books as a major accomplishment for science. What a privilege to have been part of that and to help make it possible."

And what happened to that telescope that was a precursor to his work on Hubble, the one he bought as a 12-year-old kid?