Researchers at Johns Hopkins have coaxed stem cells into forming networks of new blood vessels in the laboratory, and then have successfully transplanted them into mice. 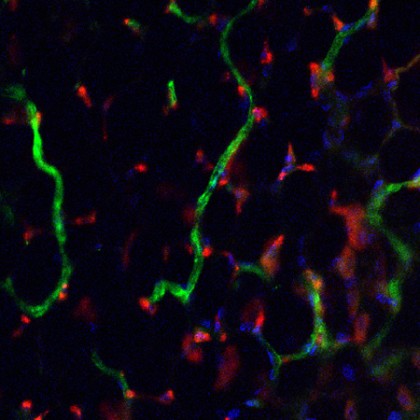 The stem cells are made by reprogramming ordinary cells, so the new technique could potentially be used to make blood vessels that are genetically matched to individual patients and are unlikely to be rejected by their immune systems, the investigators say. The results appear online in the Proceedings of the National Academy of Sciences.

"In demonstrating the ability to rebuild a microvascular bed in a clinically relevant manner, we have made an important step toward the construction of blood vessels for therapeutic use," says Sharon Gerecht, an associate professor in the Department of Chemical and Biomolecular Engineering, Physical Sciences-Oncology Center, and Institute for NanoBioTechnology. "Our findings could yield more-effective treatments for patients afflicted with burns, diabetic complications, and other conditions in which vasculature function is compromised."

Gerecht's research group and others had previously grown blood vessels in the laboratory using stem cells, but barriers remained to efficiently producing the vessels and using them to treat patients.

For the current study, the group focused on streamlining the new growth process. Where other experiments used chemical cues to get stem cells to form cells of a single type, or to mature into a smorgasbord of cell types that the researchers would then sort through, graduate student Sravanti Kusuma devised a way to get the stem cells to form the two cell types needed to build new blood vesselsﬂand only those types.

"It makes the process quicker and more robust if you donít have to sort through a lot of cells you don't need to find the ones you do, or grow two batches of cells," she says.

A second difference between this and previous experiments was that instead of using adult stem cells derived from cord blood or bone marrow to construct the network of vessels, Gerechtís group teamed with Linzhao Cheng, a professor in the university's Institute for Cell Engineering, to use induced pluripotent stem cells as their starting point. Since these types of cell are made by reverse-engineering mature cellsﬂfrom the skin or blood, for exampleﬂusing them means that the resulting blood vessels could be tailor-made for specific patients, Kusuma says.

"This is an elegant use of human induced pluripotent stem cells that can form multiple cell types within one kind of tissue or organ and have the same genetic background," Cheng says. "This study showed that in addition to being able to form blood cells and neural cells as previously shown, blood-derived human induced pluripotent stem cells can also form multiple types of vascular network cells."

To grow the vessels, the research team put the stem cells into a scaffolding made of a squishy material called hydrogel. The hydrogel was loaded with chemical cues that nudged the cells to organize into a network of recognizable blood vessels made up of cells that create the network and the type that support and give vessels their structure. This was the first time that blood vessels had been constructed from human pluripotent stem cells in synthetic material.

To learn whether the vessel-infused hydrogel would work inside a living animal, the group implanted it into mice. After two weeks, the lab-grown vessels had integrated with the miceís own vessels, and the hydrogel had begun to biodegrade and disappear as it had been designed to do.

"That these vessels survive and function inside a living animal is a crucial step in getting them to medical application," Kusuma says.

One of the next steps, she says, will be to look more closely at the 3-D structures that the lab-grown vessels form. Another will be to see whether the vessels can deliver blood to damaged tissues and help them recover.

Other authors on the report were Yu-I Shen, Donny Hanjaya-Putra, and Prashant Mali, all of Johns Hopkins.