50 JHU students lend a hand to local nonprofits, get a lot more in return 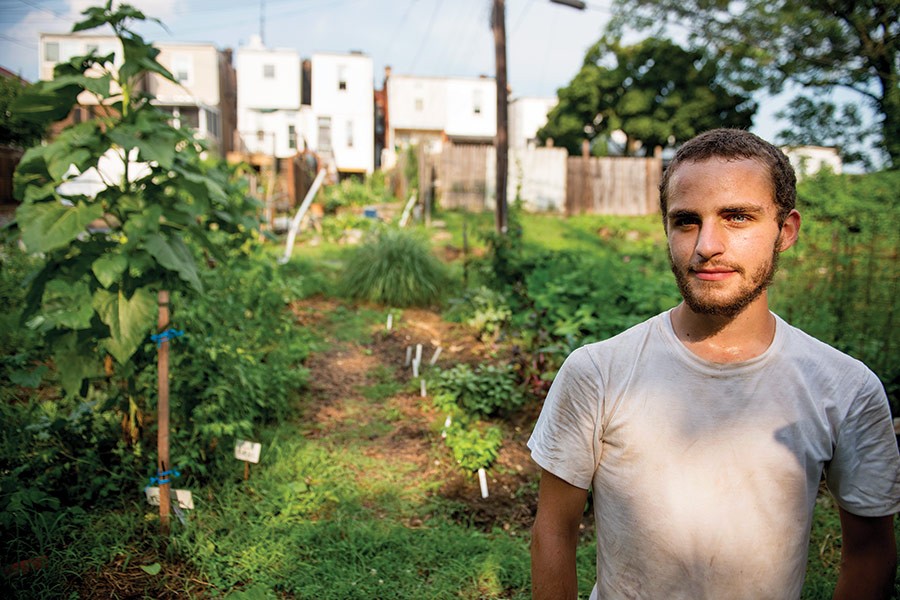 Image caption: Jon Smeton at the Baltimore Free Farm, which provides free food to the needy.

At 901 Arts, a storefront community arts center tucked in the Waverly neighborhood east of the university's Homewood campus, rising senior biology and East Asian studies major Vissagan Gopalakrishan is about to do something he's never done before: teach kids to sing. 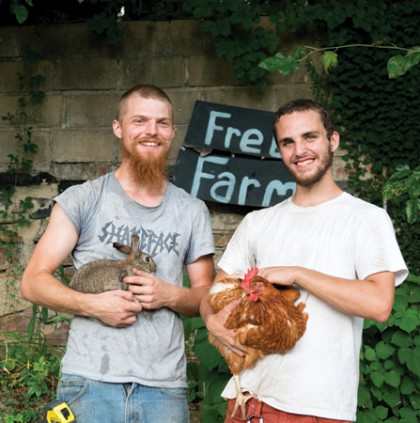 "What's up, guys," he says to the 10 eager-eyed youths, ages 7 to 14, gathered in a ring of folding chairs around him. "Welcome to singing class." Soon enough he has them clustered around a battered, but surprisingly in tune, upright piano performing vocal warm-up exercises. A couple of the girls giggle as they're told to make hissing sounds. "We're snakes!" they say.

Meanwhile, in the Gay Street neighborhood northwest of the Johns Hopkins Hospital, rising junior history major Muska Kamran is in a place where she never imagined herself spending a summer: a boxing gym. The Mack Lewis Boxing Gym is a storied East Baltimore institution that has been teaching young men (and, lately, a few young women) the pugilist arts for decades. In a small office heaped with red boxing gloves and lined with yellowing fight posters, Kamran sits before a computer developing a database for use with a literacy program she's helping set up at the gym. Young boxers will soon come here for help with both their right hooks and their reading.

"I do plan on getting in the ring and throwing a few punches," she says, as the shouts and glove smacks of a training match drift in from the ring just outside her door. "The kids that will come for the literacy program are interested in boxing, and I want to take part in what their passion is."

It's summer in the city, and that means that 50 Johns Hopkins students find themselves in far-flung corners of Baltimore, rolling up their sleeves and working for community-focused charitable groups and social service agencies, from homeless shelters to urban farms to the Mayor's Office. They are participants in the Community Impact Internships Program, a three-year-old initiative funded by an anonymous donor that sends undergraduates out beyond campus to spend two months helping to make Baltimore a better place. Since the program's inception in 2011, the participants will have logged some 30,000 hours of community service by summer's end.

"Students have told me it's a life-changing experience," says Abby Neyenhouse, assistant director for community and nonprofit internships, who oversees the internship program for the Johns Hopkins Center for Social Concern.

The nonprofits and agencies benefit from the students' talents and labor at no cost to them.

Rising senior neuroscience major Ryan Bickley is interning at Shepherd's Clinic, a health care provider for the uninsured in the city's Homestead neighborhood. "He has been doing a fantastic job," says the clinic's director, physician Melissa DeLong. "He is enthusiastic and effective, and we very much enjoy having him part of the clinic team this summer."

But as Neyenhouse reflects on the program, another winner, she says, is the university itself. "Having these very passionate interns out in communities working so hard, I think, does more in changing people's hearts and minds about our students and our university than any other initiative we could possibly do," she says.

New this year, eight students who participated in the program last year are interning again while also serving as "peer mentors" for the others.

"My main role is to ensure everyone is having a good time with internships and make sure nothing is going wrong," says intern/peer mentor Jon Smeton while cutting some kale at the Baltimore Free Farm, a community garden in Hampden—complete with chickens—that provides free food to the needy. Last year he interned for the Farm Alliance of Baltimore City, a network of urban farms.

"It's an amazing opportunity," he says of the program. "I knew nothing about urban farming before this, and now my diet has definitely been more open to healthy food." And his internships have not only changed his eating habits but have affected his academics, too, as the biophysics major recently added a minor in global environmental change and sustainability as a result of his experiences with self-styled city gardening.

"I think there is a lot of value in getting students exposed to Baltimore and the amazing stuff that exists here beyond mainstream places like the Inner Harbor," he adds. "We don't really understand what it's like to be a member of the Baltimore community, but we live here for four years—there just seems to be something wrong with that."

Summertime singing teacher Gopalakrishan agrees. "I really do believe that Hopkins is a bubble in many senses," he says. "During the school year I stay primarily on campus, and I think so do a lot of students. To be able to really immerse myself in this neighborhood over the summer has been an absolute blessing."

When not leading weekly singing classes, the hobbyist musician helps the small arts organization in a variety of ways, from working to redesign its website to showering the neighborhood with its promotional fliers.

The Johns Hopkins program, by design, tends to place interns at smaller, more grassroots organizations, where the students will have diverse duties and greater responsibilities. "It could look very different if we'd just taken a who's who list of the biggest nonprofits in Baltimore and given each three or four interns," Neyenhouse says.

"The program takes a lot of Hopkins students out of their comfort zone to really realize all the cool things Baltimore does have to offer," says rising senior neuroscience major Lily Thompson, who is interning for Live Baltimore, a downtown nonprofit promoting home ownership in the city. She may be the most well-traveled of all the interns this summer, as her job is to create marketing materials for 10 diverse Baltimore neighborhoods, including Violetville in the southwest, Cheswolde in the northwest, and Highlandtown in the east. She's been visiting each to meet community leaders and see the housing stock and amenities.

"I think there is a perception of Baltimore as just being a lot of vacant rowhomes," she says. "What I've found surprising is that there is a ton of variety in Baltimore houses and neighborhoods. It has really motivated me to convince other people how awesome the city is."