When a breast tumor is detected, many women opt to have a lumpectomy, which is surgery designed to remove the diseased tissue while preserving the breast. But during this procedure, doctors cannot learn right away whether all the cancerous tissue has been removed, with no microscopic signs that cancer cells were left behind. Because of this delay, one in five of these women—up to 66,000 patients annually in the U.S. alon—must return for a second surgery to remove any remaining cancer. These follow-up operations boost health care costs and can lead to delays in receiving other treatments such as radiation and chemotherapy. 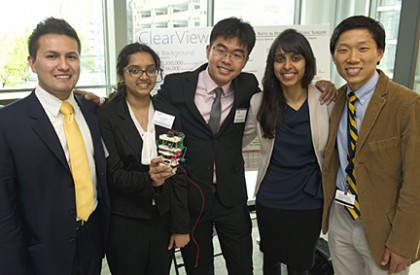 To reduce the need for these second surgeries, four Johns Hopkins graduate students designed a device to allow pathologists to quickly inspect excised breast tissue within 20 minutes, while the patient is still in the operating room. If this inspection indicates that the tumor was not fully taken out, additional tissue can be removed during the same operation. And eliminating the need for more surgery could curb some of the additional anxiety these patients face.

The device is still in its prototype stage, but the students say their goal is to give breast cancer patients the same rapid review that commonly occurs when tumors are removed from elsewhere in the body.

The students learned about the second-surgery dilemma while observing medical procedures last summer as part of a yearlong biomedical engineering masterís degree program in which students learn to design new medical tools and products that address urgent health care needs.

Hector Neira, one of the student inventors, says that the group spoke to breast cancer surgeons, who told them that they are "desperate for something that will allow them to remove the tumor in its entirety the first time, so that the patient doesn't have to come back for a second surgery."

So far, the team's system has been tested on animal tissue and human breast samples from a tissue bank, but it has not yet been used on patients. Over the past year, however, the design and market analysis of the device earned the students more than $40,000 in college business plan prize money. In the recent Design Day event for Johns Hopkins biomedical engineering students, the team received the top People's Choice award.

Although the financial support and recognition are helpful, "that's not our ultimate goal," says Anjana Sinha, another of the student inventors. "We're not doing it for the money. We want to improve health care practices and raise the standard of care for these breast cancer patients. Why can't they get the same type of quick results that people with other types of cancer receive?"

When most tumors, such as those in the liver, are removed, the pathology staff can quickly flash-freeze the tissue and slice off paper-thin samples for microscopic examination. If the pathologist sees that cancer cells extend to the outer edge or margin of a sample, the surgeon is advised to remove more tissue from the patient. But breast tissue poses a problem: It possesses a high fat content and does not freeze well, causing the samples to smear, form gaps, and become unsuitable for a quick review. Instead, breast tissue must be preserved and analyzed in a more time-consuming process that requires the patient to return to the operating room if the first surgery appears to have left cancer cells behind.

To solve this problem, the graduate students brainstormed for an engineering solution. Their most promising and practical idea was a device that applies an adhesive film to the breast tissue before it is sliced. The film holds the delicate tissue together, preventing damage to the samples during the slicing process. The result, the students say, is a sample that can be clearly reviewed by a pathologist within 20 minutes of its removal, potentially eliminating the need for a second operation on another day.

The low-cost system includes a reusable applicator and a proprietary disposable film. The students say that the need for their product is significant, citing the estimated 330,000 lumpectomies that are performed annually in the United States alone.

"I think the students have been incredibly creative in their development of this concept, and they are addressing a very real need in the field of breast cancer surgery," says Melissa Camp, a Johns Hopkins assistant professor of surgery, who worked with the team.

The pathology device was developed under the supervision of the university's Center for Bioengineering Innovation and Design. The center teams students with faculty researchers, physicians, and others who help them understand health care needs and guide them as they propose solutions, then build and test prototypes. CBID operates within the Department of Biomedical Engineering, which is shared by the university's schools of Medicine and Engineering.

Along with Neira and Sinha, the student inventors of the breast cancer device were Qing Xiang Yee and Vaishakhi Mayya. All four students received their master's degrees in May, but Sinha and Mayya will remain at Johns Hopkins during the coming year to continue working on the project with David Shin, another recent graduate of the CBID master's program. The students also will continue collaborating with advisers from the School of Medicine, including Ashley Cimino-Mathews, an assistant professor of surgical pathology, and James Shin, a surgical pathology research specialist. Jason Benkoski, a senior materials scientist from the university's Applied Physics Laboratory, will serve as a technical adviser to the team. The Wallace H. Coulter Foundation is providing funding for these students to continue working on the project this year. 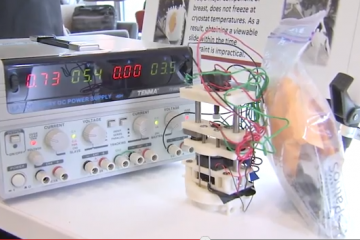 How the device works