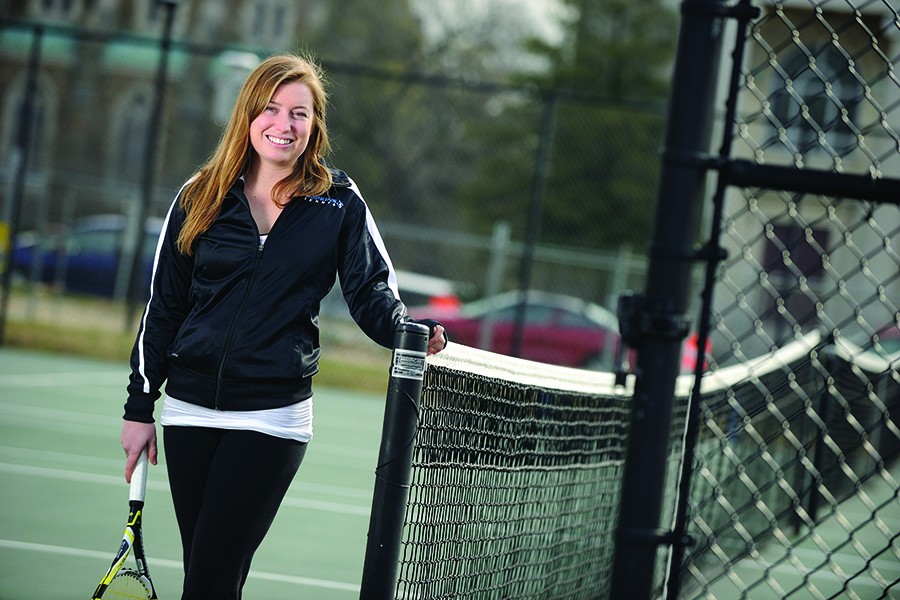 Many tennis players swear by the power game. There's nothing like lacing a winner to the far corner of the court and leaving the opponent flat-footed.

Hailey Hogan would rather make them sweat.

Hogan is addicted to the drop shot. The tennis standout, who admits to loving quick points, says that bringing her opponent into the net with dinks and dunks is too good to pass up.

"Everyone probably hates on me because of it," says Hogan, who flashes a wicked smile to divulge she's not too worried about any animosity coming her way. "I drop shot like every other hit now. I probably should stop, but it has become my go-to move. I enjoy messing with people and running them around as compared to overpowering them on the court."

Note to Hogan: Keep messing with people. It's working.

The junior from Newport Beach, Calif., holds several program records and is quickly moving up the charts in many categories, including overall wins, where she currently ranks 10th. She ranks first in single-season wins by a freshman (37), highest national singles ranking (12th), and highest national ranking in doubles (fourth) along with former partner Nandita Krishnan, who went down with an ACL tear during a match in the fall.

With the loss of Krishnan, one of the program's most successful players, Hogan and others have had to step up their games. And they have.

Earlier in the season, the Johns Hopkins women's team won the ITA Division III National Team Indoor Championship. The fifth-seeded Blue Jays rallied from a 4-2 deficit to defeat rival Carnegie Mellon 5-4 in the finals. On the heels of winning the indoor title, the team vaulted to the top of the ITA national poll for the first time in program history.

Hogan wants to keep the squad perched on top.

Although she has tasted success in both, Hogan prefers doubles play over singles. "I like short points. I don't like being out there [on the court] forever. And I like the team aspect of doubles," she says. "It's more fun."

For Hogan, tennis has always been fun.

She started playing at age 5. She dabbled in other sports but stuck with tennis. Early on, Hogan had difficulty against "pushers," defensive-minded players who would hit everything back without deliberately hitting a winner. âžž "I could never beat players like that, so much that I wanted to quit. But I stuck with it, and now I enjoy playing that style of player."

At age 12, Hogan earned a spot in the finals at the back draw of the Super Nationals held that year in Arizona. She called it the turning point in her career, as it gave her the confidence that she could compete at a high level.

She attended Corona del Mar High School and helped lead the school's tennis team to the California Interscholastic Federation championship. During her senior year, she made it to the finals of the CIF state doubles tournament.

When it came time to look for colleges, Hogan sought East Coast schools with a pre-med track. She wanted to escape California, she says, even if that meant less beach time. A visit to Johns Hopkins cemented her decision.

"I just loved it here. And I really clicked with [director of tennis] Chuck [Willenborg]," says Hogan, a behavioral biology major.

Hogan excelled her freshman year in both singles and doubles play. She quickly built a winning chemistry with Krishnan, a native of India. The two shared a passion for tennis, and both had fathers who played professional sports.

Hogan's father, Mike, was drafted by the Houston Astros in 1982 and spent most of his career pitching in the minors for the Astros and the San Francisco Giants. Her pal Krishnan comes from Indian tennis royalty, as both her grandfather (Ramanathan) and father (Ramesh) played professional tennis at a very high level.

Hogan says that her dad instilled in her a love of sports and a work ethic.

Women's head coach Dave Woodring says that Hogan came to JHU a polished and accomplished player. Her game has only matured since then. She's become an all-court player, Woodring says, with an adept feel and touch.

On the court, Hogan exudes cool and calm.

"Maybe it's the California in her, but she exemplifies laid-back," Woodring says. "She never gets rattled. She's solid, dependable, and in control. And she can do things on the court that are really amazing."

Says Hogan, "I'm very calm on the court. I don't think I show emotion. I might overthink things but don't show it to my opponent."

Woodring also has noticed her love of the drop shot.

"I think she is addicted to it. But she's great at the lobs and touch shots. She can change the pace of a game whenever she wants. There is so much variation in her game that it gets frustrating for other players."

Woodring says that Hogan has adapted well to her new doubles partner, sophomore Elaine Baik, and sees a bright future for the duo.

"[Nandita and she] were a great team. But Elaine and she will develop," he says. "Hailey is the best. She's always positive. As a coach, if you had six Hailey Hogans, you'd want for nothing else."

Hogan might appear confident, but she's aware of her game's shortcomings. She claims her fitness is bad and her stamina "is horrible."

It didn't help that she spent the fall semester in Copenhagen and barely picked up a racket. She worked in a medical program and spent time at a local hospital, where she witnessed a few live births. The experience made her consider OB/GYN as a prospective field, though she's also open to trauma. "I like the excitement and the pressure," says Hogan, a Grey's Anatomy fan.

The indoor championship title, she says, provided lots of both. "We had never won anything ever as a team. We were all excited."

The next goal, Hogan says, is to go far in the NCAAs, perhaps all the way to the finals. She hopes to dink and dunk her way there.