Although JHU has competed as an independent with no conference or league affiliation for the entire 130-year history of its men's lacrosse program, the changing landscape of the sport has prompted the university to consider its options, Daniels said.

"Some traditional foes have recently announced changes in their own affiliations, changes that might limit their flexibility to continue scheduling games with us," Daniels wrote. "At the same time, growth of the sport at the Division I level has resulted in the formation of more leagues with automatic qualification for the NCAA tournament, potentially limiting post-season opportunities for at-large qualifiers."

Daniels said that Johns Hopkins has not received any formal invitations to join a conference but has been approached by more than one seeking to gauge JHU's interest in becoming an associate member.

He announced that he was forming a special committee to look into conference affiliation options. The committee will work closely with JHU athletics director Tom Calder and men's lacrosse coach Dave Pietramala, and will submit its findings and recommendations to Daniels by May 15.

"We have made no commitments," he wrote. "We have made no decisions. We have concluded only that it is time to consider this question in the Johns Hopkins way: with care, deliberation, and transparency."

Johns Hopkins first fielded a men's lacrosse team in 1883, seven years after the founding of the university. The Blue Jays have won 44 national titles, including nine since men's lacrosse became a sanctioned NCAA sport, and have participated in 41 consecutive NCAA tournaments, a streak that began in 1972.

There are currently 63 Division I men's lacrosse programs, four of which compete as independents: Johns Hopkins, High Point, Marquette, and Mercer. The remaining 59 teams belong to one of nine conferences.

Among the committee's tasks will be to seek the views of members of the university community, both on campus and among alumni and friends. A website for sharing thoughts has been created at http://web.jhu.edu/administration/president/lacrosse_committee. 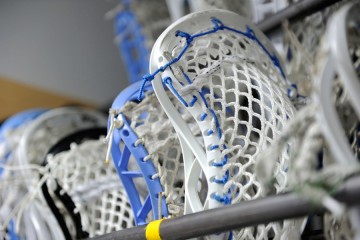 Monument to a winning tradition