Fueled by grants of up to $2,500, 55 students undertook a sweeping range of original research projects the Provost's Undergraduate Research Awards program, now in its 20th year

"Research" is a curious English word because you could read it as employing the Latin prefix "re-" to indicate repetition, or a return to an action. But research, of course, is all about new searches—going forward into uncharted scientific, academic, or cultural waters. A prime example of this quest for new knowledge and know-how is the Provost's Undergraduate Research Awards program, now in its 20th year. 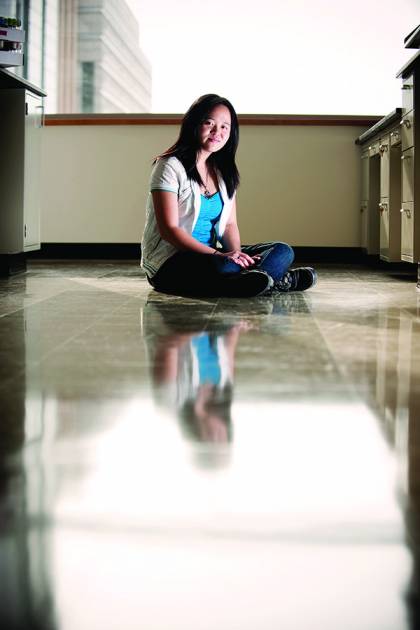 Image caption: An oddball fruit fly led Julia Zhang to a discovery that advances our understanding of the molecules regulating sleep.

Fueled by grants of up to $2,500 and mentored by faculty, 55 students undertook a sweeping range of original research projects last summer and fall, from down-the-microscope explorations of life at the molecular level to up-the-telescope looks at the cosmos. Topics came straight from today's headlines, such as the constitutionality of drone strikes on American citizens, and also led to the yellowed pages of medieval manuscripts.

Through donations from the Hodson Trust, the PURA program has to date supported more than 900 undergraduates from the schools of Arts and Sciences, Engineering, and Nursing, and the Peabody Conservatory, performing research projects to expand their intellectual worlds and, ultimately, ours as well.

Here's a look at some of the student work that will be presented at an April 30 event honoring this year's recipients. The activities, to be held in the Glass Pavilion at Homewood, begin at 3 p.m. with an informal poster session allowing students to display and talk about their projects. An awards ceremony hosted by Scott Zeger, vice provost for research, will begin at 4:30 p.m. and will include a performance by PURA recipient Niccolo Seligmann. The entire Johns Hopkins community is invited.

At first blush, looking at paintings to learn how to play an instrument seems as nonsensical as listening to a symphony as a means to learn how to paint. But three years ago, when Peabody sophomore Niccolo Seligmann became enraptured with the vielle (vyel), a medieval version of the violin that he heard at an early music festival, imagery is largely all he had to go on when taking up the ancient instrument. There's no 13th-century "Vielle for Dummies" book.

"Illustrated manuscripts are invaluable sources of information to figure out vielle technique," says Seligmann, whose faculty sponsor was Mark Cudek, director of the Early Music Program at the Peabody Conservatory. "Iconography is about all we have."

Some hoary renderings show the vielle played under the chin like a violin; other images have it bowed between the legs. As a player of a viola da gamba—a seven-string Renaissance relative of the cello that he studies at Peabody—Seligmann chose the latter approach to the instrument.

His PURA project was designed to take his vielle knowledge and musicianship to the next level and included eight lessons with Virginia-based vielle teacher Tina Chancey and more research into the instrument's murky past, and culminated in a vielle recital last fall.

Why is the violin the king of bowed instruments today? Seligmann's answer is simple: "It's louder," he says. Indeed, the vielle, with its flat back and gut strings, is quieter than the modern violin. It also commonly has five strings to the violin's four, and rudimentary frets in the form of gut strings tied around the neck at appropriate intervals. Seligmann, however, bristles at the notion some people have that the instrument is crude or that the music of its age was simple.

"Medieval music is largely overlooked as primitive, but it was just as complex and refined as today's," he says. "They had a vivid musical culture and musical identity but were just working in a very different system than we use now."

That there's little early documentation related to the vielle and, indeed, very little written music from its heyday, is frustrating for Seligmann, but then it is also freeing. Much of the music that viellists played 700-odd years ago was probably improvised, making the vielle sort of an early jazz instrument.

"Part of the appeal for me is that we really don't know how it was played or what it sounded like," Seligmann says. "That means we can sort of do what we want."

Seligmann, who is now Peabody's sole trained vielle player, is certainly open-minded when wielding his old instrument. "I [once] brought it to an open mike at a bar and played some Persian tunes, an Americana dance, and a Black Sabbath set with a whole lot of drunk people with out-of-tune guitars," he says.

"They all look alike" is a rude and racist way that members of one race might describe members of another.

As ugly as this comment is, there appears to be at least a small kernel of truth to it, as senior Allen Chang found out in a PURA project that sailed headlong into questioning the role that culture and ethnic background play in facial recognition. The psychological and brain sciences major developed an experiment that observed the existence of what's called the "cross-race effect," wherein people are better at recognizing and discerning differences in the faces of their own race or ethnic group and worse at performing such facial recognition with other groups.

"I was drawn to this topic because it is very anecdotal," says Chang, whose faculty sponsor was Michael Yassa, an assistant professor in the Krieger School's Department of Psychological and Brain Sciences. "We all have had this experience. Why not try to replicate it in a lab setting and understand why this is happening and, from that, see what we can do with this effect?"

Chang created a database of computer-generated faces in four ethnic groups: African, European, South Asian, and East Asian. Using special morphing software, he could then make adjustments to their facial structure in increments of 30, 40, 50, and 60 percent. (Only facial structure, such as cheekbone height and eye shape, changed on the bald heads, not more-overt things, such as eye color or skin tone.) He then had study participants from each of the four ethnic groups view a series of the faces—originals, morphed versions, and duplicates of both—and asked them after each was shown whether it was a new face or one they'd seen before. Of particular interest was how well participants would discern that the morphed faces were new, despite the varying degrees of similarity that they had to their original versions.

"The long-term goal is to see if we can teach people to overcome some of this bias," says Chang, who envisions some important real-world applications for improved facial recognition. &acute;We could do training for TSA officers to more efficiently recognize people on most-wanted lists, or even for covert ops to better recognize the terrorist or the criminals that they are supposed to find or tail."

While Shakespeare called sleep "Nature's soft nurse" and the "balm of hurt minds," scientists take a pragmatic, not poetic, look at our daily downtime. The lab run by Mark Wu, an assistant professor of neurology, medicine, and neuroscience in the School of Medicine, is interested in the molecular and genetic underpinnings of sleep. And it was here that Julia Zhang, a cellular and molecular biology major who will receive her degree from the Krieger School of Arts and Sciences in May, undertook a PURA project that made important advances in our understanding of the molecules regulating sleep. Such knowledge is particularly important when you consider that sleep disorders cost the country an estimated $100 billion a year.

Zhang has been working in the lab since her sophomore year and was involved with much of the groundwork leading up to her PURA project, which all began with an oddball fruit fly; specifically, a Drosophila melanogaster that was a bit of an insomniac.

"Our lab previously discovered this mutant fly which would sleep a lot less compared to other wild-type flies or normal flies," Zhang says. (Yes, flies sleep—and the lab even has an automated system that can monitor the sleep patterns of thousands of flies.)

The $100 billion question then became, What kept this fly buzzing when others were catching z's? After a genetic analysis of the insomniac fly, it was discovered that it lacked a specific—and never before examined—protein, which the lab named Wide Awake.

Next up was uncovering Wide Awake's role in promoting sleep. One place to look was the regulation of gamma-aminobutyric acid, or GABA, which helps to induce sleep—in flies and in humans—by quieting neural activity. Indeed, most sleep aids on the market today work to promote GABA signaling. &acute;The better we understand GABA signaling and how it works, the more likely we are able to find new targets for treating sleep disorders," Zhang says.

The theory going into the PURA project was that Wide Awake worked on a GABA receptor in flies called Rdl. And after months of painstaking lab work and analysis involving co-immunoprecipitation, in vitro binding, and immunostaining experiments, Zhang and her lab colleagues concluded that this was indeed the case. She and her colleagues found that Wide Awake interacts with and upregulates Rdl.

"The Wide Awake molecule had never been characterized and was completely novel," Wu says. "What Julia has done is very important because she helped find the mechanism of what this molecule does. In addition, this molecule is conserved in mammals including humans, and we are now studying how it functions in mice."

So, some years in the future when you are tossing and turning in the wee hours and reach for a pill to ease you into "Nature's soft nurse," you might have Zhang and her insomniac flies to thank.