The real mean streets of The Wire

Back in 2002, when the HBO series The Wire began filming in Baltimore, Peter Beilenson had no interest in watching it. "I knew the show only by the furor it caused in city hall, where its depiction of Baltimore's drug problem was viewed as a political negative," he writes in his new book, Tapping Into The Wire: The Real Urban Crisis, published this month by the Johns Hopkins University Press. 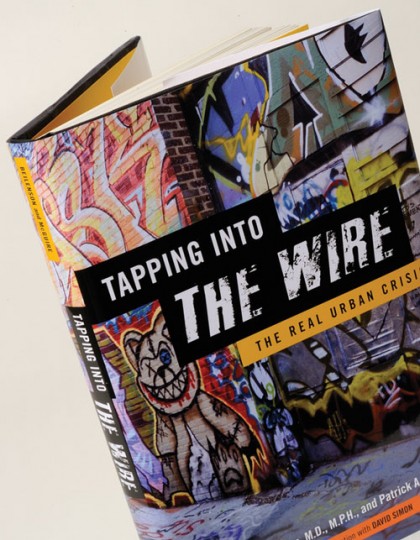 Image caption: The idea for Peter Beilenson's book grew out of his undergrad public health studies course on Baltimore and The Wire.

Beilenson, who served as Baltimore City's health commissioner from 1992 to 2005 and who is now health officer for Howard County, says that when he finally watched The Wire in 2008—a year after the show ended—he was struck by how perfectly it illustrated the public health and social problems he faced during his 13 years as health commissioner. "It became clear that [the show] was a hook to get the main message out," he says. "It was public health writ large. It's not just disease, not just typhoid prevention and immunizations. There's a lot more to public health than was typically thought of in the past."

He partnered with journalist Patrick McGuire, a former Baltimore Sun reporter, and together they wrote a book that uses the realistic characters and scenarios from The Wire to discuss the larger public health issues faced by cities.

Beilenson says that the idea for the book actually grew out of his undergraduate public health studies course, Baltimore and The Wire: A Focus on Major Urban Issues. The course, which he has taught on the Homewood campus for the past two years, has featured an all-star lineup of guest speakers, including creator of The Wire David Simon, cast members Lawrence Gilliard Jr. and Michael Kenneth Williams (who played D'Angelo Barksdale and Omar Little, respectively), former Baltimore Mayor Kurt Schmoke, former Baltimore City police commissioner Ed Norris, and CEO of Baltimore City schools Andr&eacute;s Alonso. The popular course has inspired students to become more involved in local issues. One of his former students, for example, was instrumental in creating at Johns Hopkins the interdisciplinary Community Engineering course, through which undergraduates research an urban issue and implement a proposed solution in the local community.

Beilenson's definition of public health is one that incorporates social and environmental elements as well as traditional clinical health. "[In Baltimore] we were focusing on things that were literally killing people: infant mortality, youth homicide, drug use, AIDS, and overdoses." He says these things have a huge impact on young people in urban communities, and they are public health issues because they are causing people to die, become ill, or be injured at much greater rates and at much younger ages than expected. And they affect people who live outside these communities as well. Beilenson points to the cost of drugs, the cost of incarceration, and the fact that local businesses can't find reliable employees because the drug problem is so widespread. "All of that affects suburban taxpayers because it's costing them money," he says.

Beilenson points out that the message of the book, which he says is intended for a lay audience, is universal. Although the events of The Wire played out on the streets of Baltimore, "this is not just Baltimore," he says. "Newark, Richmond, Pittsburgh, Philadelphia. Parts of New York, LA where I'm from, Chicago. Almost every major city has places like this."

Beilenson stresses that there's no single cause of a lot of the problems that affect our inner cities, and also no single solution. But he hopes that by providing information about the struggles he faced as Baltimore's health commissioner—what worked, what didn't, and why—he might galvanize people to act in their own cities.