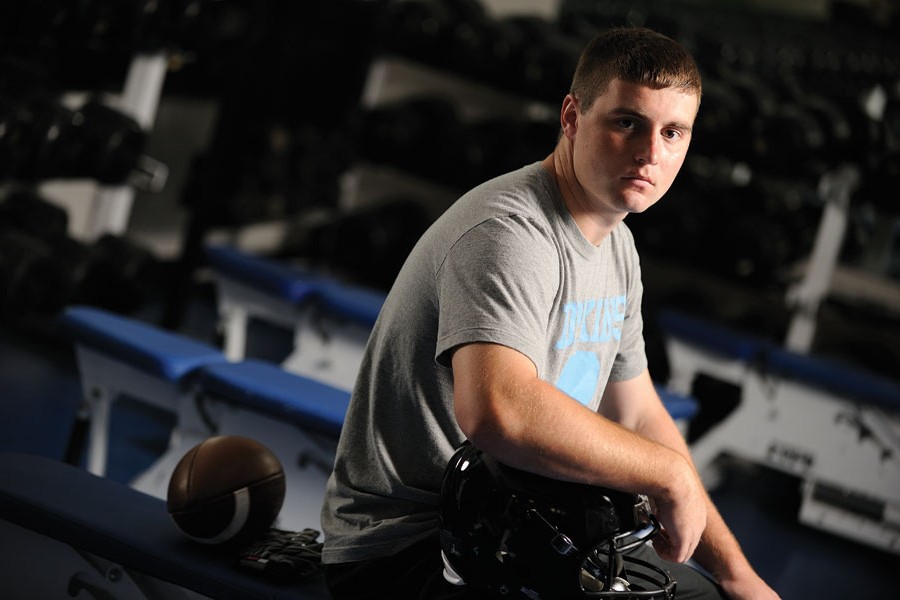 Dan and his older brother, James, competed and fought like most siblings, but in sports they faced off like Poland vs. Russia. James and his friends would challenge and terrorize Dan in driveway basketball games, sometimes unsportingly taking him on three on one. He lost, a lot. But each defeat strengthened Dan's resolve.

"We were best friends, still are, but I always wanted to beat him," says Wodicka, a biomedical engineering major with a near-spotless GPA. "I remember that first time I finally beat James at basketball. I ran into the house to yell to my mom I finally beat him."

Wodicka has since grown accustomed to athletic success, particularly on the football field.

In his freshman year, Wodicka made an instant impact with the Blue Jays, pulling in 35 receptions for 530 yards, including an 80-yard touchdown reception in a 44-10 win over Dickinson. Wodicka was just getting started. Last year, the West Lafayette, Ind., native caught a team-record 87 passes for 1,245 yards and seven touchdowns. He was a big part of an offense that averaged 40 points and 492 yards per game. The Blue Jays posted a 10-1 record, won the Centennial Conference Championship, and advanced to the NCAA playoffs for only the third time in school history.

"Last year was a lot of fun," says Wodicka, a confident but unassuming sort. "Everyone was playing really well. The whole offense clicked."

Clicked might be an understatement. The team never scored less than 27 points and seemingly marched up and down the field at will. In week seven, senior quarterback Hewitt Tomlin threw for 501 yards and seven touchdowns—both school records—as the visiting Blue Jays rolled up a program-record 731 yards in an 83-21 win over host Gettysburg. In the contest, Wodicka tied the JHU single-game record for receptions, 15, and had a career-high 217 receiving yards. On the year, he averaged a hefty 113 receiving yards per game.

Wodicka attributes his personal success last season to the leadership and mentoring of senior teammate Sam Wernick, and to the off-season work he did to transform his body, like Christian Bale preparing for his role as Batman.

"The college game, and freshman year, was a bit of culture shock for me," he says. "I was thrown around the field a good bit. I felt weak and knew I needed to do something about it."

Last summer, Wodicka hit the weight room hard and put on 10 extra pounds of muscle—but made sure not to compromise his main weapon, speed.

Dan Swanstrom, the team's offensive coordinator and quarterback coach, says that Wodicka has a habit of making opposing cornerbacks look like they're running in mud.

Wodicka attributes part of his athleticism to playing three sports in high school. Like every other Indianan, he grew up with a basketball in his hand and learned to shoot. He played point guard for his high school's basketball team, and he was the baseball team's starting centerfielder.

Football, however, has always been Wodicka's passion. He idolized Drew Brees, the star quarterback for Purdue University (located just miles from Wodicka's home), who went on to Super Bowl glory with the New Orleans Saints.

"He's still my hero and a big reason I decided to play football," he says. "I just love his personality, and he always seems to do the right thing."

Wodicka played wide receiver his first three years of high school but shifted to quarterback his senior season to replace the team's graduating starter. He made the transition look easy. Wodicka led his team to an undefeated season and the state championship, which earned him the title of Mr. Indiana Football, an honor previously won by future NFL players Rex Grossman, now with the Washington Redskins, and Darren Evans, drafted last year by the Indianapolis Colts.

"I embraced the opportunity to play quarterback," he says. "But I love playing wide receiver."

Swanstrom says that he was blown away when he saw Wodicka's highlight video from high school.

From the moment he sat down to watch the video, Swanstrom says, he could see that Wodicka's speed and hands were unique and difference makers.

"It was like I was watching a scripted movie where people are supposed to jump and dive out of the way, and Dan's supposed to just zigzag and get into the end zone," says Swanstrom, who counts himself as Wodicka's biggest fan. "I just thought no way is this kid coming to Johns Hopkins. He had such good grades and, footballwise, I knew he was going to get a lot of interest from different schools." What Swanstrom didn't know at the time was that Wodicka had already narrowed his search to two schools, Johns Hopkins and Case Western University. Brother James attended Case Western, and Johns Hopkins was his father's alma mater. George Wodicka graduated from the School of Engineering in 1982 alongside Blue Jays head football coach Jim Margraff.

Wodicka says that the combination of Johns Hopkins' strong biomedical engineering program and the connection of his father to Coach Margraff made the decision to attend JHU an easy one.

Wodicka says he derives his love of both sports and engineering from his father, a baseball player at JHU and the founding director of Purdue's Weldon School of Biomedical Engineering.

The past two summers, Wodicka has pursued concussion-related research at the Weldon School, where faculty fitted football helmets with accelerometers to measure the force and quantity of hits and then gave the players a computerized neurocognitive exam to test memory and concentration. Wodicka worked five days a week in the lab, mostly examining MRI brain images as part of an effort to better diagnose concussions.

He also spent this summer working on his game; in particular, his route technique and getting off the line of scrimmage. "You need to find every edge you can," he says.

The 2012 Blue Jays will miss the prolific passing of Tomlin, and 25 other seniors lost to graduation. Wodicka admits that it's going to be tough repeating the success of 2011, especially the team's offensive production. "We had a lot of confidence in ourselves, and once we got rolling, we felt like we couldn't be stopped," he says.

Wodicka, who was selected as a Preseason Second Team All-American in Lindy's 2012 College Football Preview, says he expects a big season from himself and senior Scott Cremens, who had 59 receptions and a team-high nine touchdowns.

Swanstrom says that Wodicka and Cremens will certainly help set the tone this year, but other teams know that, too.

"Opposing coaches and players will be very aware of Dan, especially without Sam Wernick around," he says. "But I'm confident Dan will be able to be productive."

When asked if he expects other teams to double team and key against Wodicka, Swanstrom pauses and smiles. "I would think people will know where he is on the field at all times."

No matter. Wodicka knows a thing or two about unfair odds.