Sarma honored for work in developing treatments for brain disorders such as Parkinson's disease, epilepsy

Sridevi V. Sarma, a Johns Hopkins faculty member who is using her knowledge of electrical engineering and computer science to develop new treatments for brain disorders such as Parkinson's disease and epilepsy, is among 96 researchers selected this year to receive the Presidential Early Career Award for Scientists and Engineers. 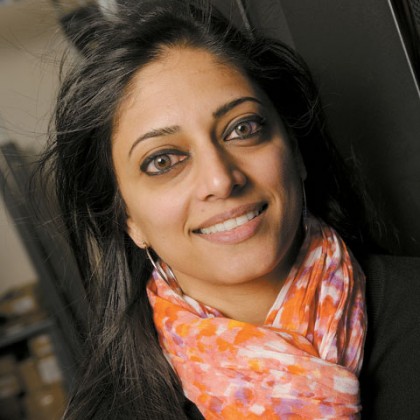 The award, announced by President Barack Obama, is the United States government's highest honor for scientists and engineers in the early stages of their independent research careers.

The awards were presented July 31 at a ceremony held at the Smithsonian National Museum of Natural History in Washington, D.C. John P. Holdren, director of the White House Office of Science and Technology Policy, represented the White House at the ceremony.

The award program was established by President Bill Clinton in 1996. Awardees are selected for their pursuit of innovative research at the frontiers of science and technology, and their commitment to community service, as demonstrated through scientific leadership, public education, or community outreach.

Sarma, an assistant professor of biomedical engineering, was nominated for the award by the National Science Foundation. A citation accompanying the honor states that it is being given "for a transformative approach to design and control of electrical deep brain stimulation for the treatment of Parkinson's disease, and for innovative educational and outreach activities including mentoring of women in science and engineering."

Describing her problem-solving strategy, Sarma says, "Researchers such as myself, trained in control theory, look at complex systems to understand the individual parts and their interconnectedness. I apply this to the study of the brain. I want to use control theory tools to better understand the brain's neural circuitry in the hopes of finding new treatments for disorders and disease. I am thrilled that the National Science Foundation has recognized my work, especially because it is geared more toward clinical impact."

Although she focuses on medical applications and collaborates with physicians in the School of Medicine, Sarma's faculty appointment is in the Whiting School of Engineering. Nicholas P. Jones, the Benjamin T. Rome Dean of the Whiting School, says that the Presidential Early Career Award "is wonderful recognition for the innovative and inspiring work Sri is doing at Johns Hopkins' Institute for Computational Medicine, and of the potential her research holds to improve treatment of neurological disorders."

Toward this goal, Sarma has been working with School of Medicine epilepsy experts to improve anti-seizure technology that sends small amounts of current into the brain to control seizures in patients who do not respond well to medications.

Sarma's interest in brain disorders developed relatively late in her education. An electrical engineering graduate of Cornell University, she earned a doctorate at MIT in electrical engineering and computer science with a minor in neuroscience. For a neuroscience class, she conducted a case study of her aunt, who had developed Parkinson's disease at age 29 and had trouble managing it with medication. Watching her aunt's condition was an emotionally draining experience, Sarma says, and she wondered if anything in her own training could help. "I really wanted to understand the neurobiological circuitry of this disease," she says.

That led Sarma to learn more about deep brain stimulation—the use of electric pulses to treat brain disorders such as Parkinson's and epilepsy. She completed a postdoctoral fellowship in MIT's Brain and Cognitive Sciences Department and became a neuroscience research associate affiliated with Massachusetts General Hospital and Harvard Medical School.

In 2009, she joined the faculty of Johns Hopkins' Department of Biomedical Engineering, which is shared by the schools of Medicine and Engineering. She also is a core faculty member in the university's Institute for Computational Medicine. In 2011, she received a Faculty Early Career Development Award from the National Science Foundation.