Comedian Seth Meyers will lead off the annual Milton S. Eisenhower Symposium at 8 p.m. on Tuesday, Sept. 4, in Shriver Hall Auditorium on the Homewood campus. Doors open at 7:30 p.m., and a reception in the Clipper Room follows the event. 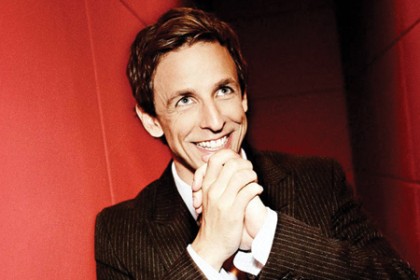 Meyers' talk is the first of six events making up this year's symposium, titled The Power of the Individual: How One Voice Can Change the World.

Also scheduled for 2012 are former Army 1st Lt. Dan Choi, who served in Iraq and challenged the now-defunct Don't Ask, Don't Tell policy, Tuesday, Sept. 18; founder and CEO of Teach for America Wendy Kopp, Tuesday, Oct. 2; former Utah Gov. Jon Huntsman, who also served as U.S. ambassador to China and was a Republican presidential candidate, Wednesday, Oct. 17; lawyer, author, and CNN analyst Jeffrey Toobin, Tuesday, Oct. 30; and Wikipedia co-founder Jimmy Wales, Wednesday, Nov. 14. Additional speakers may be announced soon. All lectures are at 8 p.m. in Shriver Hall Auditorium. Each talk lasts approximately 45 minutes and is followed by a question-and-answer period and a reception with the speaker.

Established in 1967 to honor the university's eighth president, the annual MSE Symposium is an undergraduate-run lecture series, free and open to the public, that brings to campus renowned speakers with a variety of perspectives on issues of national importance.

The students are selling $60 season passes that will secure seating near the stage. Reserved seats can also be purchased for one event at $20. For details, go to jhu.edu/mse.