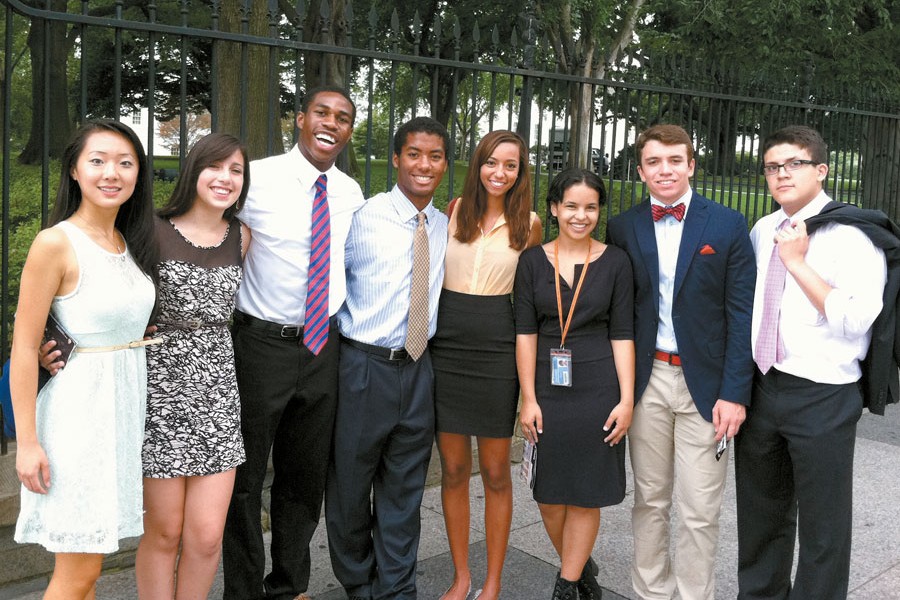 Most days this summer, you'd find 17-year-old Rachel Viqueira running experiments with mice at the Johns Hopkins Neurogenetics and Behavior Center, helping investigators better understand the intricacies of how the brain works and gaining the kind of lab experience that most young scientists can only dream of. But one day in July, the Maplewood, N.J., high school senior got the day off so that she and her seven fellow interns from the Johns Hopkins Center for Talented Youth Center Scholars Program could tour the White House at President Obama's invitation.

The private tour took these high school students to the East Wing, where they visited a variety of spaces, including the Green Room, the library, and the Red Room. The students, who ranged in age from 15 to 18 and came from across the United States, also met with top White House aide Michael Strautmanis and shared their insights about the positive impact that working in a laboratory environment has had on their interest in pursuing careers in science.

The Center Scholars Program, developed by CTY and Andrew Feinberg's Center for Excellence in Genome Science at Johns Hopkins, was launched in 2005 to encourage bright high school students from historically underrepresented minority groups to explore careers in scientific research, particularly in the field of genomics.

"I'm really glad we had the opportunity to go," says Viqueira, whose group was accompanied on the tour by Elaine Hansen, CTY's executive director, and program mentor and Johns Hopkins epigeneticist Feinberg. "The most memorable part for me was speaking with Michael Strautmanis, who made me realize that the work we do has importance to others. As CTY Center Scholars we can really help change perceptions toward minorities and high school students in science labs."

Students in the three-year program spend their first summer in a three-week residential CTY course on genetics, followed by a second summer studying genomics with CTY. During their third summer, they complete a six-week research internship in Baltimore with faculty at the Johns Hopkins School of Medicine. They receive full financial support to cover their CTY courses, travel and living expenses, and a stipend during their internship.

The visit came about after Feinberg and colleagues visited the White House to discuss science with the president. During the meeting, Feinberg mentioned his work with CTY Center Scholars as an example of how engaging students early on can foster their interest in pursuing scientific and research careers. When Feinberg offered to introduce the president to some of the scholars, he accepted. Unfortunately, Obama's travel schedule made it impossible for him to meet the students on their visit.

To date, 68 students have completed the CTY Center Scholars Program, which is funded by the National Human Genome Research Institute. Many of these students have gone on to study science in college and pursue careers in the field. "The literature shows that for science you need to have early exposure for it to have a significant impact on your career choice," Feinberg says. "The CTY Center Scholars Program has been a huge success."

Hansen adds, "Research has already demonstrated that the first cohorts of Center Scholars showed significantly higher interest in science than students in a control group; we know, for example, that 73 percent of the Center Scholars currently enrolled in college are majoring in a STEM [science, technology, engineering, and mathematics] discipline, and four of them already have published scientific articles. Spending a day hearing our current interns enthusiastically discussing their lab projects and interacting as a passionate community of young scientists brought those statistics to life. Early intervention with gifted minority students clearly works."