Cheers is a monthly listing of honors and awards received by faculty, staff, and students plus recent appointments and promotions. Contributions must be submitted in writing and be accompanied by a phone number.

Kahlil Ghanem, an associate professor of infectious diseases, received the W. Barry Wood Jr. Award for excellence in teaching at the Class of 2012 convocation. This is the second time Ghanem has received the award, which is bestowed by the students in the preclinical years on teachers they deem to have been most inspirational and/or effective.

Paul Hoehner, a senior clinical associate in Anesthesiology, has been named by the Jonathan Edwards Center at Yale to be part of an international team of scholars to edit some 750 unpublished sermons by Edwards (1703-58), a Puritan theologian and philosopher who was the third president of what is now Princeton University. In addition to his anesthesiology work at Johns Hopkins, Hoehner is a seminary graduate and doctoral candidate in the University of Virginia's Department of Religious Studies. He is preparing a dissertation on Edwards' theological philosophy.

Roy Ziegelstein, a professor of cardiology, executive vice director of the Department of Medicine, and associate director of the Internal Medicine residency program, received the George J. Stuart Award as outstanding clinical teacher. This is the fifth time that Ziegelstein has received the award, which is given by seniors at the school's annual convocation.

An endowed chair in honor of Susan P. Baker and Stephen P. Teret, professors in Health Policy and Management, has been established to support the work of the UC Davis Violence Prevention Research Program, established by Garen J. Wintemute. Wintemute, a 1983 graduate of Johns Hopkins and a professor of emergency medicine at UC Davis, is one of the nation's foremost scholars addressing firearm violence as a public health problem. The endowment is named after Wintemute's mentors, who have dedicated their careers to transforming research on injury prevention into meaningful public policy. Baker founded the Johns Hopkins Center for Injury Research and Policy in 1987, and Teret, the current director of the Center for Law and the Public's Health, served as its director from 1988 to 1994.

Shannon Frattaroli, an assistant professor in Health Policy and Management, has been sworn in as a member of the Baltimore City Board of Fire Commissioners. Mayor Stephanie Rawlings-Blake officiated at the ceremony, held in City Hall.

Keshia Pollack, an assistant professor in Health Policy and Management, was awarded the Mid-Career Outstanding Service Award by the Injury Control Emergency Health Services Group. The award will be presented Oct. 30 at the APHA meeting in San Francisco.

Beth Resnick, an associate scientist in Health Policy and Management, has been selected to serve on the editorial committee of Public Health Reports, the official journal of the U.S. Public Health Service and the Office of the Surgeon General.

Lester Salamon, a professor of policy studies in Health Policy and Management, and a professor of political science in the School of Arts and Sciences, won the Aaron Wildavsky Enduring Contribution Award from the American Political Science Association for his book Partners in Public Service: Government-Nonprofit Relations in the Modern Welfare State, published by the Johns Hopkins University Press. The award recognizes an influential work published 10 to 20 years ago that has made an enduring contribution to the field of public policy. 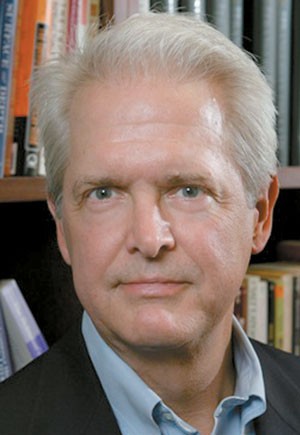 Image caption:Eric Sunquist, the Andrew W. Mellon Professor of the Humanities in the Krieger School, has won the 2012 Jay B. Hubbell Award for his exceptional lifetime achievements within the study of American literature. Sundquist, a 1978 graduate of the English Department's PhD program and a faculty member since 2010, is a widely-cited authority on African-American literature, Jewish-American literature, and the literature of the Holocaust. An endowed professor at Johns Hopkins and a former dean at Northwestern University, Sundquist has spent much of the last three decades illustrating the impact of minority cultures on the evolution of American literature. "Eric is a deserving winner of such a prestigious award," says Krieger School Dean Katherine Newman. "He has authored or edited more than a dozen books on the important and interesting roles of race, religion, and ethnicity in American literature, and contributed nearly countless essays, lectures, and lessons on the matter. He is a master of his field of study and a champion of multiculturalism, and we are very proud to count him among both our alumni and faculty." IAN MATHIAS

Krieger School of Arts and Sciences

Naveeda Khan, an assistant professor in the Department of Anthropology, has been awarded a New Directions Fellowship from The Andrew W. Mellon Foundation for her interdisciplinary project called In the Braid: Riparian Life and Climate Change. The project incorporates environmental science, humanistic studies, and anthropological fieldwork to offer new perspectives on how ancient river communities in Bangladesh are adapting their religious and societal world views to the harsh realities of a changing landscape.

Richard Chaisso, a professor of medicine, epidemiology, and international health, and director of the Johns Hopkins Center for Tuberculosis Research, has received the Centers for Disease Control and Prevention's Charles C. Shepard Award for an article that he and his research team produced for the New England Journal of Medicine. The study dealt with the innovative use of simpler and shorter antibiotic treatments to prevent latent tuberculosis from becoming active in individuals with or without HIV. The Shepard Award recognizes excellence in science.

Harry "Hal" Dietz, the Victor A. McKusick Professor of Genetics and Medicine in the McKusick-Nathans Institute for Genetic Medicine and an investigator with the Howard Hughes Medical Institute, will receive the inaugural Taubman Prize for Excellence from the A. Alfred Taubman Medical Research Institute at the University of Michigan. The prize recognizes the clinician-scientist who has done the most to transform laboratory discoveries into clinical applications for patients suffering from disease. Dietz will receive a $100,000 grant to further his research in the understanding of aortic aneurysm and related tissue disorders.

Marc J. Fishman, an assistant professor in the Department of Psychiatry and Behavioral Sciences, has been awarded the first SAMHSA Science and Service Award for Excellence in Opioid Treatment by the American Society of Addiction Medicine. The award was created to recognize programs or providers who demonstrate improved patient outcomes as a result of adopting an innovative practice.

Morton Goldberg, a professor of ophthalmology and a former director of the Wilmer Eye Institute, has become the first recipient of the Builders of Sight Clinical Research Award from the Foundation Fighting Blindness, a Columbia, Md.-based charity that is the leading nongovernmental funder of retinal research.

Geetha Jayaram, an associate professor in the Department of Psychiatry and Behavioral Sciences, has, for the second year, been awarded the Global Alumni Service to Humanity Award, which is given to Rotary Foundation alumni whose service activities and professional achievements exemplify the Rotary ideal of service above self. The award recognizes Jayaram's work on mental health projects in southern India.

Elizabeth Matsui, an associate professor of pediatrics and epidemiology, has been named top young investigator in the field of allergy and immunology by an international body of scientists on behalf of Phadia Allergy Research Forum. The honor, which comes with a $50,000 award, is sponsored by blood-test manufacturer Thermo Fisher Scientific and goes to young scientists who have advanced the field of allergy through creative and independent research. Matsui was honored for her work on pediatric asthma and her research on the role of mouse allergens as a driver of asthma flare-ups, particularly among urban patients. She received the award June 17 during the European Academy of Allergy and Immunology Conference, held in Geneva.

Edward McFarland, vice director of the Department of Orthopaedic Surgery and chief of the Division of Adult Orthopaedics, has been elected president of the Association of Bone and Joint Surgeons.

Suzanne Amato Nesbit, a research associate in the Oncology Center, has been elected to the American College of Clinical Pharmacy Board of Regents. Within the JHH Department of Pharmacy, Nesbit serves as a clinical pharmacy specialist in pain management and palliative care, as well as the program director for the PGY2 Pain Management and Palliative Care Residency.

Patricia Abbott, an associate professor in Health Systems and Outcomes; Bryan Hansen, a doctoral candidate; and Sharon Kozachik, an assistant professor in Acute and Chronic Care, were selected to participate in The American Nurse Project, a photojournalistic essay that celebrates the roles of nurses in U.S. health care. Filmmaker Carolyn Jones videotaped and interviewed 105 nurses across the United States at hospitals, universities, hospice care centers, and other medical facilities. Fourteen nurses from The Johns Hopkins Hospital are also part of the project, which includes an accompanying book. Clips of the interviews are online at americannurseproject.com.