Catching up with the Hopkins Harriers 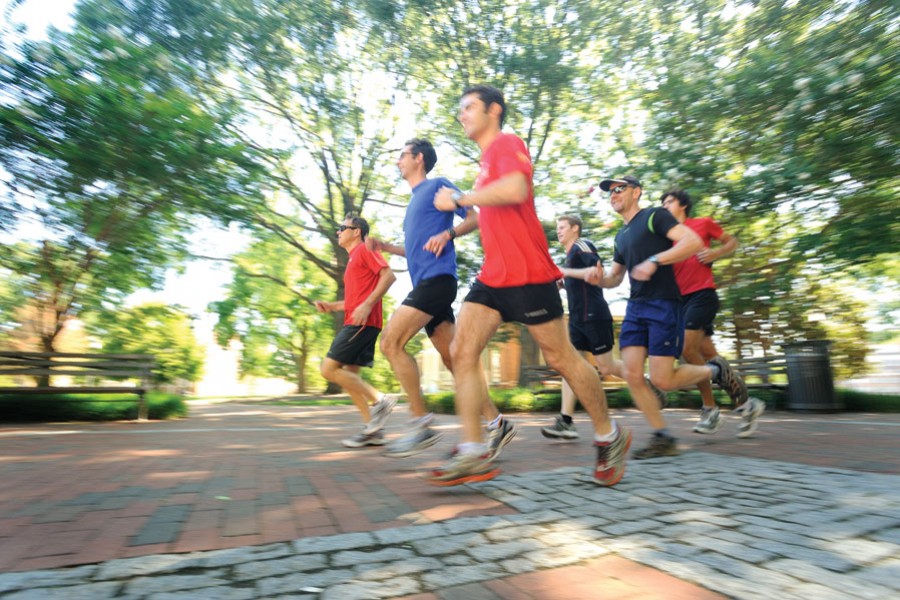 My maiden run with the Hopkins Harriers came on one of the hottest days of the summer. We met at 10:30 a.m. on the breezeway between the Keyser and Wyman quads on the Homewood campus. The syrup-thick 102-degree heat didn't deter Peter Searson and Marc Ostermeier from a modest, by their standards, seven-mile sprint through campus and the northwest environs.

"It's going to be a hot one," says Searson, a tall and lean scientist with a wide friendly smile and south England accent. "Anyone else going to join us?" A fourth person was expected, but perhaps thought twice. With a few more stretches, we were off. Quickly.

Like the bird and military jet they're named after, Harriers can fly.

Group founders Searson, a professor in Materials Science and Engineering, and Jerry Meyer, a professor of chemistry, had overlapping research interests and started to run together informally in 1993. Some years later the pair met fellow runners Marc Parlange, later chair of DoGEE and now working in Switzerland, and Thomas Haine, a professor of physical oceanography, whose reputation as a speedy marathoner preceded him. He clocked in an impressive 2:50 finish time in the 2000 Northern Central Trail Marathon. Not bad for someone who took up running at age 29.

"I used to think I was one of those people who can't run," says Haine, now chair of Earth and Planetary Sciences. "I'd played a lot of team sports at school and university but found it harder and harder to stay fit that way. I thought running would be efficient, convenient, and cheap."

The group originally called itself the JHU Men's Profs but over time added female members, staff, and graduate students, and needed to find an all-purpose and unisex moniker. The Hopkins Harriers were born. Parlange later coined the group's slogan, "Running comes first," a framed version of which he presented to Searson when he left Johns Hopkins.

The group runs year-round—rain, snow, or shine—on weekday mornings, departing from the breezeway or using the track at the Johns Hopkins at Eastern campus. Someone takes the initiative ("10:30 run anyone?") on a Listserv, and whoever is free joins in.

At any given time, the group has two dozen or so members, who hear about it through word of mouth or stumble across ce.jhu.edu/hopkinsharriers. The faculty, most twice the age of the students, often set the pace.

The core group currently includes Searson, Meyer, Ostermeier, Haine, Darryn Waugh of Earth and Planetary Sciences, and Ben Schafer, chair of Civil Engineering and the creator of the team's name.

These folks take running seriously, perhaps none more so than Haine, who has done the 62-mile Mason-Dixon Longest Day Challenge and the Massanutten Mountain Trails 100 miler.

They run to de-stress, stay in shape, train for upcoming races, and for the camaraderie. On the trail, they talk about research, marathon training, recent races, or pop culture, or just vent. On a recent run, topics ranged from the best U2 record, to the movie version of Abraham Lincoln: Vampire Hunter, to the upcoming English Premier League football season.

"When Pete and Tom start talking football [soccer], those guys get riled up and start running six-minute miles," Meyer says. "And the rest of us have our eyes peeled back and watch them shoot away. But it's kind of fun though."

They all agree that running is a great way to start or break up a day. Haine says, "Running keeps me sharp, focused, and puts everything in perspective. I always feel better after a run. I am truly privileged to have a job that is flexible enough to let me run at work with my friends each day. The social part of running with the Harriers is my favorite aspect."

By the way, we survived that 102-degree run. And the next day, the Hopkins Harriers were off and running again.