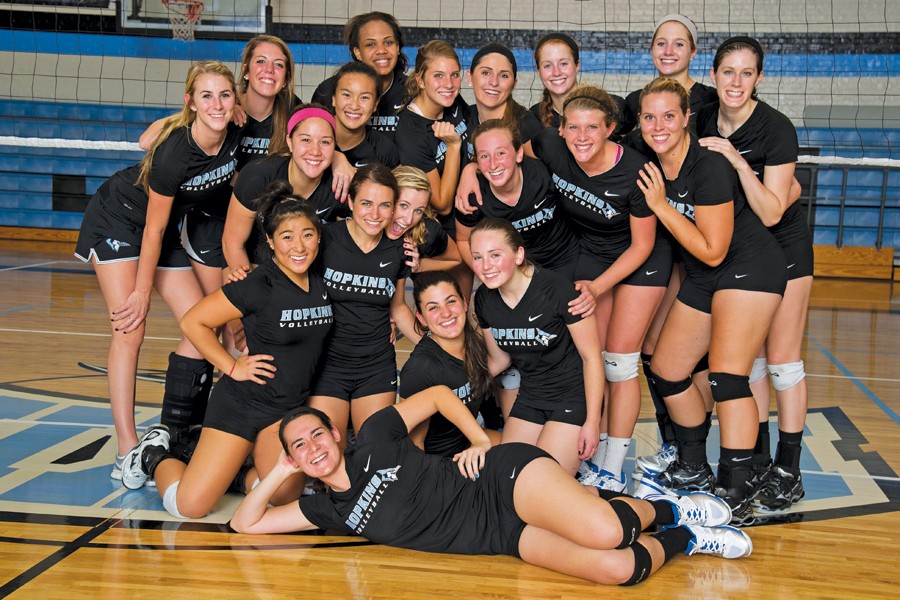 Image caption: The 2012 team has an extremely talented 20-person roster—but only six can start. Practices can be more intense than games.

At any given moment, six leather-clad volleyballs are getting whacked, smacked, or pounded into the Goldfarb Gymnasium floor. Players dig for drop shots, fearless lunges followed by a wince-inducing thump and a flesh-meet-hardwood screech.

Grunts and a fair share of point-won "Yeas!" echo out into the facility.

If a visitor just walked in and didn't notice that everyone was wearing the same black-and-blue jersey, he would think a tournament was going on.

In some ways, it is.

The 2012 JHU volleyball team has a massive, underclassmen-laden, and extremely talented 20-person roster. But as anyone who watched indoor volleyball at the Olympics this summer knows, only six can start.

To help decide which six, third-year head coach Matt Troy employs the cauldron, a system created by famed University of North Carolina basketball coach Dean Smith in which a player is graded in practices and matches. Points are awarded for a player's performance in drills and for the number of times that her team wins in scrimmages.

With precious playing time on the line, practices can get spirited and intense. The players wear bruises like badges of honor and don't hold back.

"They know that every ball matters," says Troy, a former baseball player and self-taught volleyball coach who adopted the sport six years ago to share some exercise time with his wife. "A lot of the power is in their hands. It's not a matter of my opinion on who should start but who has earned it in practice. It's more about who is bringing it every day, who is getting better, and who can compete. They bring that mindset into the actual games."

The approach is paying dividends.

Troy has quickly transformed the Blue Jays into a Centennial Conference powerhouse, and the team has steadily climbed up the national rankings. As of press time, the Blue Jays sat at No. 28 in the nation, the program's highest-ever ranking.

Last year, Johns Hopkins captured the Centennial Conference crown and went undefeated in conference play. The Blue Jays won their final 13 matches of the regular season, dropping only five sets out of 44. The team finished the 2011 season with a program-best 25-5 record and earned its first appearance in the NCAA Tournament.

To start the 2012 campaign, the team faced a grueling, depth-testing schedule of three consecutive tournaments. The Blue Jays won all three to go 12-0, the best start in the program's 28-year history.

This winning culture didn't materialize overnight, however, and Troy admits to some growing pains.

Troy inherited a team in 2010 that had gone 16-10 the previous year and lost the majority of starters to graduation. As the team's third coach in four years, Troy says he wanted to tread lightly with his new squad.

"My main goal was to mesh my system with the old ways they used for team building and communication. We had six seniors, and I certainly didn't want to overwhelm them with a lot of new things," says Troy, who previously served as head coach at Howard Community College and is now in his sixth year with the youth 12-17 Carroll Vipers Volleyball Club. He also teaches physical education and health at Crestwood Middle School in Frederick, Md.

After a slow 1-3 start, the team finished the 2010 season with nine straight wins en route to a 19-12 record that earned them third place in the Centennial Conference.

To build on the momentum from year one, Troy scoured the nation for his first recruitment class. He brought in players from Texas, California, Ohio, Pennsylvania, New York, New Jersey, and, from New Hampshire, twins. The one recruit from Maryland, Meagan Donohoe, led the team in kills and hitting percentage and earned a place on the All-American team.

Overall, Troy added height last year, bringing in five 5-foot-10 players and two 6-footers. This year he added another 6-footer, Jasmine Warrington, a right-side player from California, who has quickly made an impact, earning MVP honors in two tournaments and Centennial Conference Player of the Week.

"I wanted to get taller, no question," he says. "When I arrived, I knew we were going to have to recruit hitters since we were graduating four of the six who were on the roster. We went out and brought in as much talent as we could in one swoop."

In addition to instituting the cauldron, Troy started to videotape practices to analyze tendencies and see things he simply may not spot in real time. This year he brought in a strength and conditioning coach.

The use of the cauldron means that all players get ranked, and a large white board wheeled into practice shows the current point totals. Some girls will call or text Troy after practice to see where they stand.

"We use the [point system] as a teaching tool, but it also allows us to have factual data to show them if they ask why they are not starting when they feel they should," he says. "We use it to say this is where you are statistically, this is where you need to be, and these are things you need to do to improve."

The system took some getting used to, says Amelia Thomas, a senior captain from Baltimore.

"Last year was a big change, just in numbers and new players," says Thomas, the team's vocal leader and libero, or defensive specialist. "We were used to being a small, tightknit team, like a family. So having so many new faces on the court proved to be difficult but obviously beneficial in the end."

Thomas says that with Troy in charge she sensed the overall purpose and drive behind the team change. Each win brought a new level of confidence, and everyone worked hard to improve each week.

She says that self-motivation and desire continued into this season.

"There are a lot of people within each position fighting for playing time. There are six of us for one spot, mine," she says. "But it's making us better players. The extra motivation of wanting to play, wanting to start, and wanting to get better adds a fierce atmosphere to each practice."

Donohoe, who sprained her ankle in a pre-season practice and missed the first month, agrees.

"Our practices can be more competitive than our games," she says. "They can get intense. We want to win."

The competition also has brought the team together, she says. The players have instituted team dinners and hang out off the court. Some room with a teammate.

Troy says that the goal is to return to the NCAA Tournament this year and crack the Top 25. From there, he says, the sky is the limit.

"My job is to recruit the best talent every year," he says. "And the more we continue to improve, the more prospective student athletes will be interested in us as well. We are building for the here and now, and for the future."

Asked where the team needs to improve, Troy says that the players need to continue to build cohesiveness and get used to each other's tendencies on the court. "Do the little things right," he says, "and the big things will happen."