"The title is obviously a little bit tongue-in-cheek," says Wayne Biddle of his newest book, A Field Guide to Radiation (Penguin Books, 2012). Although it's not the sort of field guide you can take into the woods to identify things, he says, the format is a useful way to organize complex information and to include other facts—like history and culture—beyond strictly scientific content. Take, for example, the entry for polonium-210. A radioactive element discovered by Marie and Pierre Curie in 1898 and named after Marie's native Poland, polonium-210 is used today to power some satellites and space probes. It was also the poison used in the 2006 murder of former KGB officer Alexander Litvinenko. Oh, and by the way, it's found in cigarette smoke, too. 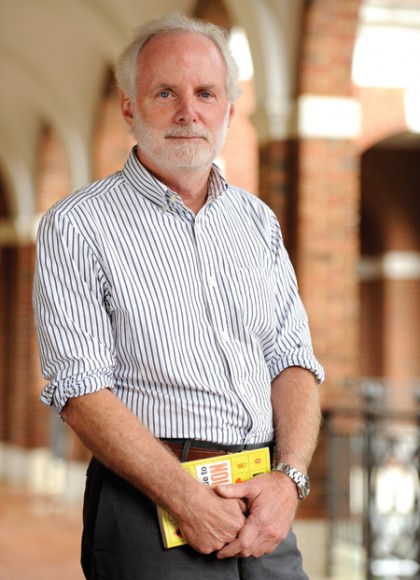 Image caption: Wayne Biddle has made a career of making complex information approachable for a lay audience

Biddle, a visiting associate professor who has taught in the Writing Seminars since 1998, says that the idea for the book came about after the Fukushima disaster in March 2011. One thing that struck him about the disaster, he says, was the miscommunication between government and industry officials and the public—similarities he drew to the Three Mile Island reactor disaster in Pennsylvania in 1979. After hearing the U.S. government's recommendation that any American citizens within 50 miles of the Fukushima reactors evacuate, he did some research and found that more than 77,000 Marylanders live within 10 miles of a nuclear power plant. As if that weren't close enough to home, he points out that the Peach Bottom Atomic Power Station in Pennsylvania is located just 45 miles north of Baltimore.

But even for those who don't live near a nuclear power plant, radiation is all around us. Decades of military usage of radioactive materials have resulted in vast stockpiles of weapons-grade radiotoxic material around the world. In addition, radiation is commonly used in medicine for imaging and treatment. And there are myriad other sources of radiation, some dangerous, some not—cosmic rays that we're exposed to on long flights, radon in soil or in our water supply, even potassium-40 in foods like bananas and Brazil nuts.

"This is a subject that we're living with whether there's a disaster or not," Biddle says. "I know it's a complex topic for a nonexpert, and I wanted to do something about that."

A Pulitzer Prize-winning journalist (he received the award for his reporting on the Star Wars antimissile program) and author of five previous books, Biddle has made a career of making complex information approachable for a lay audience. "Even experts acknowledge that the vocabulary, the jargon that's used to talk about radiation and the operation of nuclear reactors, is way beyond the grasp of nonexperts," he says. "And yet, nonexperts have to read the news that often regurgitates that jargon with very little explanation. It's a real tarpit. But it's not hard to bone up on the subject and be prepared when the next news story happens."

True to the field guide format, A Field Guide to Radiation is organized as a series of brief essays, arranged in A-to-Z order, from absorbed dose to zirconium. Biddle explains commonly used (and often misunderstood) terms, weaving in history, culture, and occasional humor. And, though it lays out the risks associated with radiation, the book is not intended to pass judgment but to inform. "A field guide to radiation is not pro- or anti-radiation any more or less than a field guide to reptiles is pro- or anti-snake," Biddle explains in the book's introduction. "The reader can take the book in hand, apply its contents against what is found in nature or the news, and gain some reliable orientation."