The two satellites, each weighing just less than 1,500 pounds, together make up the first dual-spacecraft mission specifically created to investigate the hazardous regions of near-Earth space, known as the radiation belts. These two belts, named for their discoverer, University of Iowa professor (and former APL staff member) James Van Allen, encircle the planet and are filled with highly charged particles. The belts are affected by solar storms and coronal mass ejections and sometimes swell dramatically. When this occurs, they can pose dangers to communications, GPS satellites, and human spaceflight. 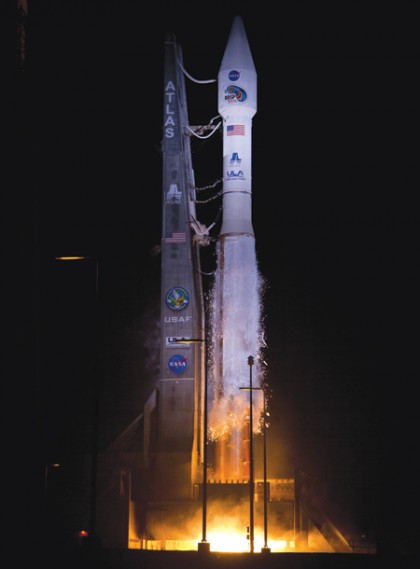 "We are proud to have designed, tested, and delivered to NASA a pair of remarkable spacecraft," says John Sommerer, head of APL's Space Department. "They have been well-equipped to undertake a challenging research mission within the harshest near-Earth space environment. The data collected by RBSP will inform scientifically profound and socially beneficial study for years to come."

The hardy satellites will spend the next two years looping through every part of both Van Allen belts. By having two spacecraft in different regions of the belts at the same time, scientists finally will be able to gather data that describe the belts' changes over space and time. "We have never before sent such comprehensive and high-quality instruments to study high radiation regions of space," says Barry Mauk, RBSP project scientist at APL. "RBSP was crafted to help us learn more about, and ultimately predict, the response of the radiation belts to solar inputs."

Designers fortified RBSP with special protective plating and rugged electronics to operate and survive within this punishing region of space that other spacecraft avoid. In addition, a space weather broadcast will transmit selected data from those instruments around the clock, giving researchers a check on current conditions near Earth. Richard Fitzgerald, RBSP project manager at APL, says, "The excitement of seeing the spacecraft in orbit and beginning to perform science measurements is like no other thrill. The entire RBSP team, from across every organization, worked together to produce an amazing pair of spacecraft."

RBSP was lifted into orbit aboard an Atlas V 401 rocket from Launch Complex 41 as the rocket's plume lit the dark skies over the Florida coast. The first spacecraft separated from the rocket's Centaur booster 1 hour, 18 minutes, 52 seconds after launch; the second separated 12 minutes,

During the 60 days after launch, operators will power up all flight systems and science instruments and deploy long antenna booms some 50 meters long. Data about the particles that swirl through the belts, and the fields and waves that transport them, are already being gathered and analyzed by five instrument suites designed and operated by teams at the New Jersey Institute of Technology; the universities of Iowa, Minnesota, and New Hampshire; and the National Reconnaissance Office.