Tam Nguyen always considered herself relatively healthy and fit. She took time for exercise and ate right, or tried to. But a heavy workload can scuttle the best-laid wellness plans. 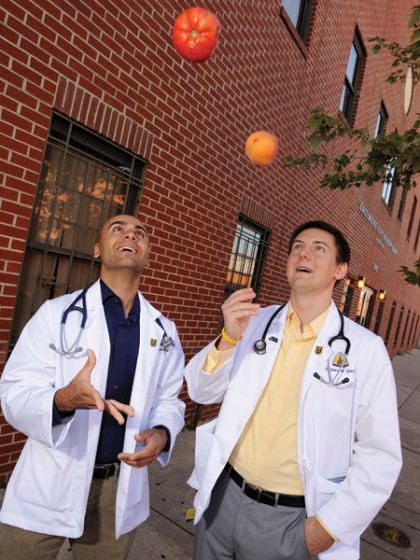 Image caption: Shiv Gaglani and David Gatz believe that the best way for caregivers to partner with their patients is to live healthy lifestyles themselves.

"It can be easy after a long day of work, say a 12-hour shift, to head to that drive-through for a burger, fries, and a Coke," says Nguyen, a faculty research associate at the School of Nursing. "Sometimes the temptation gets to be too much." Finding time for a 30-minute workout also presents a challenge.

"As a caregiver, living a healthy and well-balanced life can be a struggle," Nguyen says. "We often put the health of others above our own."

As manager of the School of Nursing's Center of Excellence for Cardiovascular Health for Vulnerable Populations, Nguyen feels a certain responsibility to practice what she preaches. So when she learned of The Patient Promise, a pledge to live a healthy lifestyle authored by students primarily at the School of Medicine, she didn't hesitate to sign and make the pledge of well-being.

The Patient Promise is a commitment, put down in writing, between health care professionals and patients that aims to instill a partnership into their relationship and, in the process, change the culture of health care. Practitioners and students of medicine, nursing, and related fields make a pledge to lead by example by practicing the same healthy lifestyle behaviors they ask of their patients.

In signing, the individual "promises" to work toward such ideals as engaging in regular physical activity, eating a balanced and nutritious diet, and refraining from harmful substances. The health care provider also pledges to encourage patients, family, friends, and others in their community to adopt healthy behaviors.

The Patient Promise website, thepatientpromise.org, launched in June 2012 and within the first month had nearly 300 signees, primarily at the schools of Medicine and Nursing. To date, more than 530 have signed, with more added each day. Co-founder Shiv Gaglani, a second-year medical student, says that he was inspired by a course on obesity and nutrition that he took his first semester at the School of Medicine. The course underscored the role of lifestyle choices on the epidemics of obesity, hypertension, and diabetes in the United States.

"Physicians and clinicians aren't immune to these kinds of things," he says. "In fact, those in health care can lead very stressful lives and might have limited time for self-care."

Gaglani learned that firsthand. Before medical school, he exercised regularly and competed in road races and triathlons. The stress and workload of medical school, however, caused him to put on 10 pounds—he calls it med school's version of the freshman 15. He started making poor food choices and found less time to run and hit the gym.

He saw he wasn't alone.

Determined to change this culture, Gaglani and co-founder David Gatz looked into existing literature on the health of health care providers.

"We found a good deal of evidence that clinicians who promote their own healthy personal behaviors are more likely to encourage patients to do the same, and have their clinical practice improve."

This viewpoint is reflected in the opening lines of The Patient Promise: "My actions and inactions reflect my priorities, influence my credibility, and affect the well-being of my patient."

"We wanted to make this pledge a personal thing," Gaglani says. "To hold oneself accountable. Those who sign the pledge are promising to work toward the tenets we laid out. They might already be living a healthy lifestyle, but they sign anyway to show support."

The Patient Promise also includes a tenet to guard against prejudice toward patients who engage in unhealthy behavior, recognizing the often-complex origins of these habits.

"Sometimes overweight patients and those who smoke feel stigmatized by their physicians, and they are less likely to seek advice and help," Gaglani says. "There are many sensitivities clinicians need to be aware of."

The Patient Promise had an immediate impact and spread quickly by word of mouth.

Two medical students, early signers of the pledge, each lost 30 pounds. Some co-signers got together to form a "healthy meeting" initiative, where they get reimbursed for bringing healthy food to staff meetings instead of the traditional pizza and soda. Some signers joined Zumba classes or quit smoking.

Nguyen says that signing the petition has encouraged her to cook at home more, choose healthier options, and find ways to exercise, even if it's just walking. She says that her new outlook has benefited her work.

"When you're doing things to promote your own health, I think it's reflected in your presence. It gives that extra layer of confidence, and the enthusiasm to share it with other people. And I've read that doctors who are overweight are less likely to talk to their patients about their own weight issues. Plus, when you're in good shape, you have more credibility talking about these topics with patients."

Doctors, nurses, and students at more than 40 institutions have signed The Patient Promise. The effort has also partnered with the American College of Preventive Medicine, American Nurses Association, the University of California, San Francisco, and others.

Recently, the pledge was signed by Michael C. Hoaglin, clinical director of The Dr. Oz Show, and Joan Duwve, chief medical officer of the Indiana State Department of Health, who left a note on the initiative's website. "We absolutely must find a way to engage health care providers in the many critical public health battles we are fighting, and losing! Thank you for this simple, but important, tool we can use to work together toward a healthier Indiana—and nation."

"The cure for obesity is known. We don't need to wait to discover any new gene or drug to make a serious dent in this public health issue. Government and guidelines will do little to change the minds of most Americans without our boots on the ground: our nation's health care professionals," he says. "Patients need every nudge they can get from those they trust, because I see and experience firsthand how easy it is to fall prey to the standard American diet and a stressful lifestyle."

Gaglani says they are far from done. He wants 1,000 signers, and to create a community around this initiative. The founders launched Facebook and Twitter pages and plan to create an animated video that offers a quick explanation of The Patient Promise.

As for Gaglani, he says he's lost the 10 pounds he put on and now finds time for exercise and meditation. He also makes sure he eats his fruit and vegetables. An apple a day is good advice for doctors, too.