Pursuing a passion for baking 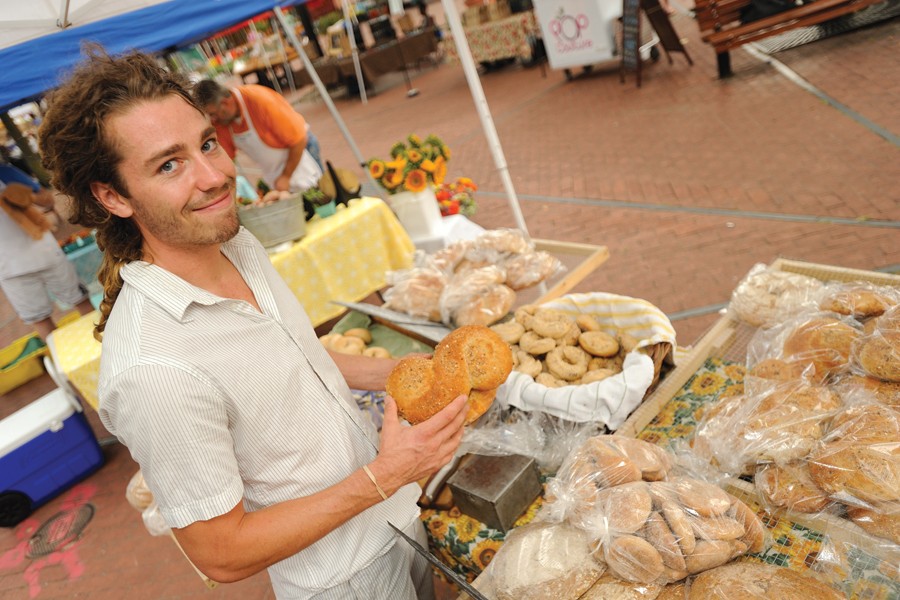 In the rustic basket piled high are "everything" bagels coated with poppy, sesame, onion, and garlic. The S-shaped loaves stacked nearby are eight-grain Pane Siciliano. At the front of the table are flat rounds of wheat bread filled with almonds and dried figs. And across the table are loaves of bread stuffed with roasted onions and purple potatoes, sage, and Parmesan cheese.

"Our customers really love the potato bread," says Osborne. "When it's fermenting, it almost smells like Thanksgiving stuffing."

It is early Saturday morning, Farmers Market Day in Fell's Point, and the 23-year-old baker/owner of The Wholy Crumb has been up most of the night baking crusty loaves of organic artisanal bread in a wood-fired oven to sell at market. Wood-fired baking is demanding, labor-intensive work. However, late nights filled with hard work are hardly a new concept to Osborne, a senior at Johns Hopkins.

"What Hopkins really taught me is how much I can accomplish in a day," he says. "Through hard work, I can really get the stuff done that I want to get done."

When Osborne taught himself how to bake bread about five years ago using the wood-fired oven he helped his father build at his family's home in southern Lancaster County, Pa., bread making was a hobby. Since then it's become much more than that.

The global environmental change and sustainability major goes to great lengths to make sure his ingredients are local—not just the rhubarb and shitake mushrooms he tucks into his breads, bagels, and rolls, but even the wheat that's the centerpiece of the 100 loaves he bakes weekly. The young baker researches and sources such locally grown and milled heirloom varieties as Clark's Cream, a white winter wheat, and Buckskin, a hard, red wheat, and incorporates them into his baking. "The old wheat varieties have so much more flavor," he explains.

After graduation Osborne hopes to expand his baking operation and increase his farming knowledge. For him, baking is a practical expression of his studies, an act as fulfilling as tearing into a fresh loaf of bread. "People see an empty plate and they're hungry. Me, a plate is full and I'm still hungry," he says. "People connect with the earth through food, and for me this is really a way of changing people's perceptions about food and the earth."