The U.S. Air Force has selected a team led by Johns Hopkins engineers to start a new materials research center of excellence that will develop novel computational and experimental methods to support the next generation of military aircraft.

The Center of Excellence on Integrated Material Modeling, CEIMM, will advance the Computational Integrated Materials Science and Engineering Initiative, which focuses on materials applications within a digital framework. The methods are expected to contribute to the design of high-performance devices and components in future aircraft structures and turbine engines. The long-term goal is to produce lightweight yet durable components for future military aircraft, from fighter jets to surveillance drones.

The center, located at the Homewood campus, brings together the nation's top academic, military, and industry researchers under a $3 million U.S. Air Force award, to be disbursed over three years. The center includes researchers from the University of Illinois at Urbana-Champaign and the University of California, Santa Barbara. CEIMM will look to continue operating beyond three years by pursuing additional funding from the Air Force and other government and industry sponsors.

"Our initiative seeks to shorten the time required to benefit from advantages offered by advanced materials," says Barry L. Farmer, chief scientist of the Materials and Manufacturing Directorate at the Air Force Research Laboratory in Ohio. "We believe that a spectrum of computational tools, coupled with advances in experimental capabilities, can alter the paradigm of how materials are selected and utilized today."

Researchers will focus on developing novel modeling and experimental techniques that can be applied across several classes of structural materials. Proof of concept will be shown in alloys for high-temperature applications and polymer matrix composite materials for aerospace components such as the chassis and fuselage.

Somnath Ghosh, the Michael G. Callas Professor in the departments of Civil Engineering and Mechanical Engineering, is director of the center.

"We'll start by understanding existing materials from the atomic scale all the way to the structural scales through state-of-the-art research, and then we'll move to designing a new generation of advanced aerospace materials," Ghosh says.

The center will operate within the Hopkins Extreme Materials Institute, HEMI, which opened earlier this year. The institute focuses on the behavior of materials and systems under extreme conditions and will apply this research to a range of related areas.

Nicholas P. Jones, the Benjamin T. Rome Dean of the Whiting School, says, "With the establishment of HEMI, and now this center, we have been able to pull together the nation's leading academic, industry, and military leaders to begin paving the way toward a 21st-century generation of materials. This mission is critical to the nation's security, and we are proud to play a key role."

The center and institute will share some staffing and infrastructure. Although they will initially operate within existing space, both will be relocated to Malone Hall, a 56,000-square-foot research building, when it is completed in 2014.

At CEIMM, researchers will focus on advanced computational and experimental methods of determining how different materials respond to different levels of loading and temperatures that can cause failure in aircraft engines and other components.

"For example, turbine engines produce more thrust as an aircraft takes off, and the higher loads and temperatures can produce changes in the dimensions of the components. This can cause all sorts of problems—engine parts may hit the casing, setting off a fire," says Ghosh. "In cases like that, we would try to find out how to increase the material's thermal-mechanical stability so that it can perform at higher loads and temperatures."

Researchers will construct three-dimensional representations of aerospace and engine materials, from atomic configurations and beyond. Virtual tests will be conducted with powerful computational models to determine, for instance, how cracks form, what causes materials to change shape, and how well materials stand up to repeated loadings. Researchers also will be evaluating material properties using multiscale testing methods on commercial alloys and polymer composites to ensure that the computer models are accurate.

The Air Force award for the center also will provide funding for new educational opportunities. It is expected to support research that will involve more than a dozen doctoral students, postdoctoral researchers, and undergraduates annually. 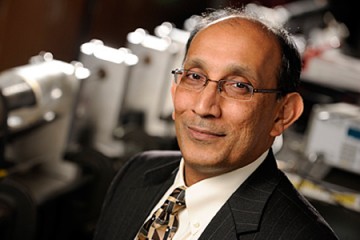