Cheers is a monthly listing of honors and awards received by faculty, staff, and students plus recent appointments and promotions. Contributions must be submitted in writing and be accompanied by a phone number. 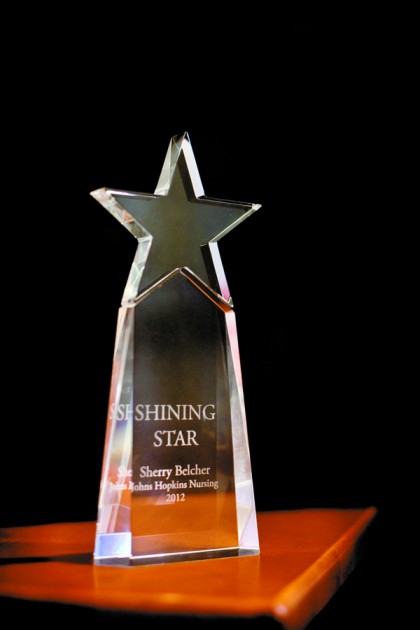 The Messenger team received the 2012 Laurels for Team Achievement Award from the International Academy of Astronautics at the Sept. 30 opening ceremony of the 63rd International Astronautical Congress, held in Naples, Italy. Ralph McNutt, project scientist; Stamatios Krimigis, co-investigator; and James McAdams, mission design lead, accepted the award before an audience that included 14 heads of space agencies. The citation for the award reads, in part: "To the team of scientists and engineers whose creativity and expertise made possible the development and operation of the Messenger mission, the first to orbit Mercury, as a breakthrough in scientific solar system exploration. ... This unique achievement of technology was conducted by the JHU APL and accomplished with the collaboration of NASA."

Jon Walter has joined the Office of the Dean of Students as student/community liaison. Walter recently retired from his longtime position as a community relations officer in the Baltimore City Police Department's Northern District, the area in which the Homewood campus is located.

Faculty artist Manuel Barrueco, guitar, made his first tour of China in October, giving master classes and recitals in Shanghai and Chengdu.

Michael Delfin, a double-degree student in piano and history, tied for second prize in the XVII Chautauqua Piano Competition at the Chautauqua Music Festival in New York. He studies with Boris Slutsky at Peabody.

Rebecca Henry, the Scott Bendann Professor in Classical Music, who chairs the Preparatory's String Department and teaches violin pedagogy in the Conservatory, was featured in the "Ask the Teacher" section in the September issue of The Strad magazine.

Ronaldo Rolim, an artist diploma candidate who studies with Benjamin Pasternack, was awarded the second prize and the special prize for the best performance of a work by Debussy in the International Piano Competition of San Marino.

Antonio Missiroli, an adjunct professor of European studies at SAIS Bologna, has been named director of the European Union Institute for Security Studies in Paris. Missiroli, who was a research fellow at the EUISS in 2002-2005, has served as director of studies at a Brussels-based think tank, the European Policy Centre, and latterly in the European Commission's Bureau of European Policy Advisers, where he was responsible for contacts with think tanks, academia, and stakeholders. The institute, which is financed by the EU's 27 member states, was established in 2001 with a mandate to develop studies of the EU's then embryonic security policy.

George Cigale, the founder and CEO of tutor.com, an online tutoring, homework help, career services, and education company, has been named a visiting fellow. The school's Visiting Fellows program is designed to provide a forum where leading researchers and practitioners can exchange ideas, debate, study, and evaluate new approaches to reforming educational practice in the United States. Cigale will focus on the power of persistent student feedback, investigating the effect of regularly asking for and sharing student perceptions on the quality of instruction, student engagement, and the K-12 school culture.

Chiquita Collins has been named assistant dean for diversity to direct implementation of Johns Hopkins Medicine's Diversity & Inclusion 2020 strategic plan. Collins, who was identified through a nationwide search, was previously health equity research director at Altarum Institute, a health systems research and consulting organization serving government and private-sector clients, and has served on the faculties of the University of Illinois, Chicago; Georgia Tech; and the University of Texas. She is recognized at both state and national levels for her work in health disparities.

Julie Freischlag, a professor and surgeon in chief of The Johns Hopkins Hospital, has been selected as chair of the American College of Surgeons' 22-member board of regents. The 78,000-member college is the largest organization of surgeons in the world.

Lisa Ishii, an assistant professor of facial plastic and reconstructive surgery at Bayview, has become the only recipient in a single year of two awards from the American Academy of Otolaryngology—Head and Neck Surgery in recognition of her research. She received the AAO-HNS Cochrane Scholar Award and the academy's Guidelines-International-Network Scholar Award.

Roy Ziegelstein, a professor of cardiology, executive vice director of the Department of Medicine, and associate director of internal medicine residency at Bayview, has been named senior associate dean for faculty development.

Delora Sanchez, associate director of State Affairs in the Office of Government and Community Affairs, has been named to the 2012 list of Leading Women of Maryland under the age of 40, compiled by The Daily Record, Baltimore's legal and business newspaper.

The Arc Baltimore, in collaboration with the Baltimore Business Journal, selected Johns Hopkins to receive an award at its Employers of Distinction event, which was held Oct. 24 at the Crowne Plaza in Timonium. The Partnership Award, which was accepted on behalf of the university by Karen Geary, of Building Operations and Maintenance, recognizes organizations that hire people with disabilities and who have "committed the time and resources needed for the Arc-supported employees to be productive and confident workers, setting the example for the entire business community."

Kostas Konstantopoulos, a professor and chair of the Department of Chemical and Biomolecular Engineering, has been named a fellow of the Biomedical Engineering Society. Konstantopoulos, one of only nine fellows elected to the society's Class of 2012, received the honor in recognition of his "seminal bioengineering research contributions involving the discovery and characterization of novel selectin ligands expressed by metastatic tumor cells."

Rene Vidal, an associate professor of biomedical engineering and director of the Vision Dynamics and Learning Lab, is the recipient of the International Association for Pattern Recognition J.K. Aggarwal Prize. The prize recognizes "a technical contribution of far-reaching significance and impact on the field of pattern recognition or its closely allied fields by a young investigator." Vidal was selected for his "outstanding contributions to the generalized principal component analysis and subspace clustering in computer vision and pattern recognition."

Tim Weihs, a professor in Materials Science and Engineering and director of the Center for Leadership Education, is the recipient of the 2013 Application to Practice Award from the Minerals, Metals & Materials Society.?Weihs was awarded this honor "for commercializing reactive multilayer foils with requisite scientific understanding, innovation, and sustainable economics, and for inspiring the next generation of entrepreneurs."